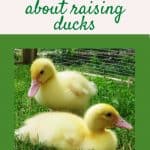 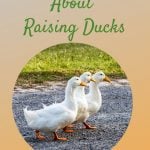 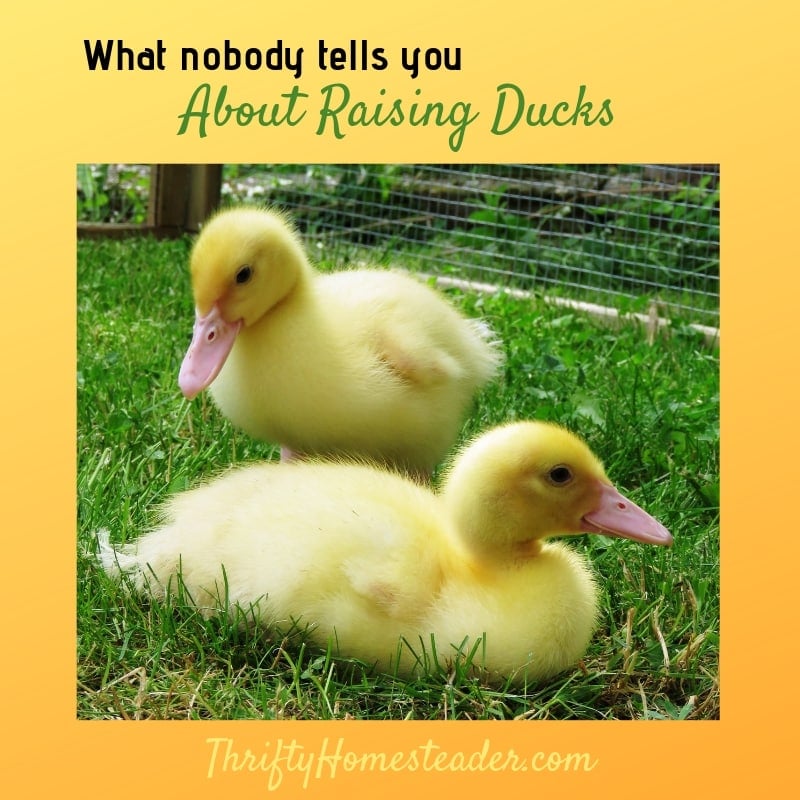 If you’ve ever thought about raising ducks, this guest post by Rebekah Pierce of J&R Pierce Family Farm will help you get started successfully and if you already raise ducks, please share your tips in the comment section!

Here’s how our decision to start raising ducks happened.

I was waitressing at the time, and my now-husband (then my fiance) sent me a text about half an hour before my shift was about to end.

“Hey. Tractor Supply has ducklings for sale. Want to get some?”

I met him at Tractor Supply as soon as I finished work, the aroma of french fries and artificial pancake syrup still lingering on my clothes. We purchased six healthy, gorgeous Khaki Campbells and hurried to get them home to the brooder.

Our duck-raising journey didn’t turn out so great for us – we made some critical mistakes that, had we been more prepared, could have been easily avoided. When you read advice articles online, they usually center around all the joys of raising livestock – “they till your garden for you!” “they eat ticks!” “they poop magical, golden poop!”

With ducks, none of that is true.

Of course, that’s rarely true for any livestock species. However, I think there’s still a lot of advice to be given in the way of raising ducks, because they aren’t all they’re quacked – cracked – up to be.

Here is what I wish we had been told about raising ducks before we made the leap to try raising them ourselves.

They eat a lot

We wrongly assumed that our ducklings would eat about the same amount of food as our baby chicks. After all, the feed is usually packaged in the same size bags.

However, we were sorely mistaken. Ducklings eat considerably more than baby chicks – in our case, they consumed a bag of feed about every two weeks. Although you can feed them regular chick starter, those food bills can add up quite quickly.

Plus, they’re messy eaters. Consider giving them plenty of room to make a mess with their food, and always use an adult-sized feeder – don’t bother with the junior feeders, as they’ll quickly grow out of them and you’ll find yourself feeding your ducklings several times a day.

As adorable as ducklings are, nobody ever bothers to mention how much these little guys poop. This makes sense when you consider the sheer amount of food they eat, but keep in mind that duck poop is not of the same caliber as chicken poop. You will need to change their bedding frequently – like every couple of days.

When you pick up your ducklings, make sure you already have a plan in place to dispose of all of that poop. While duck waste can be a great fertilizer for your garden, you need to have a way to get it there and a place to allow it to age appropriately before you use it.

One of the other factors that we did not think about before we embarked on our duck-raising journey was that they really, really love water. Of course, we knew that ducks like the water. However, what we did not anticipate was the sheer mess that arose as a result of them splashing and playing in their waterer all day.

Whenever we cleaned the bedding, the ducklings would have it soaked within about an hour, contributing to a greater overall stench and mess. If you keep ducklings in a brooder, remember this, as it means more upkeep and time spent cleaning and maintaining your brooder.

Ducklings grow rapidly, putting on about an ounce of weight every day. This doesn’t sound like a lot, but in the duck world, it’s huge. Make sure your birds have plenty of room to move around, and don’t purchase ducklings too early in the season, like we did.

One of my biggest complaints about chain feed stores is that they get mass shipments of poultry, plants, and other seasonal items all at the same time – often, completely regardless of the weather conditions or patterns of the climate outside. We bought our ducks in early March, and while we ended up putting them outside after four weeks, this was far too early. The weather was still too cold where we live for them to be healthy, which led to a ton of other issues later on down the road.

If you make the decision to purchase ducks, don’t rush into it. Wait to pick up your ducklings until you know the weather and other conditions can support them.

You can tell a duck is going to move awkwardly just by looking at it. These clumsy creatures are incredibly adorable, but they can also get themselves into some tight spots. It’s not uncommon for them to stick their heads into small openings or to scratch themselves as they hobble around your property.

Long story short, make sure you have the resources necessary to address accidents when they happen. Brush up on basic poultry first aid, and have your veterinarian’s phone number on hand in case something happens that you cannot deal with on your own. 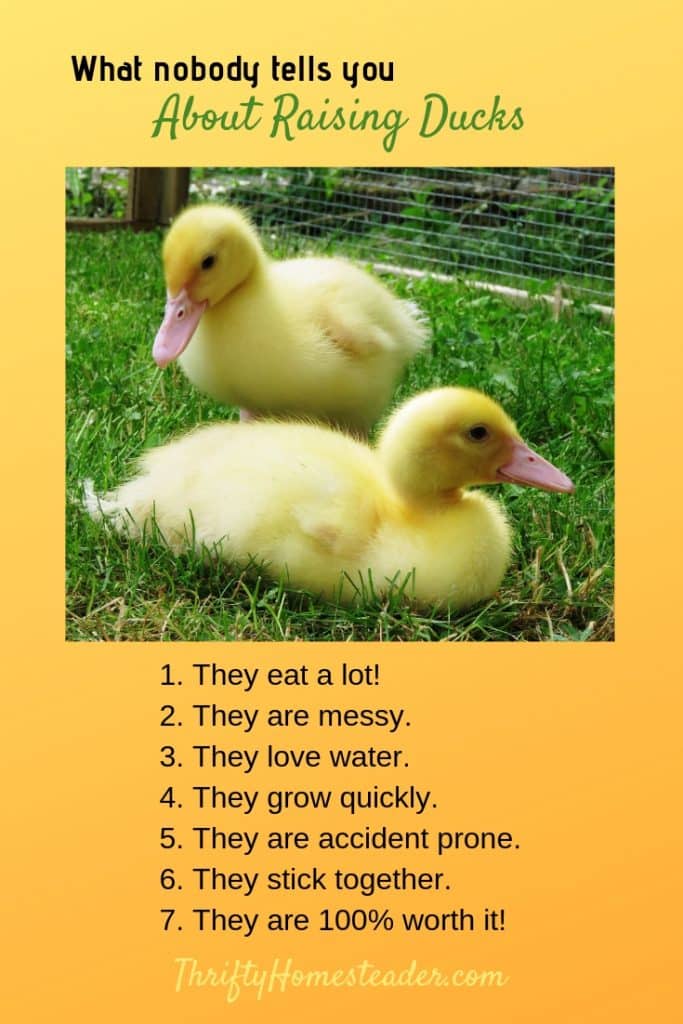 Ducks are probably some of the most enjoyable animals to watch, particularly when they are young. They have individual personalities that really shine through, and while each breed is a little bit different, they are fascinating to watch in a group.

I have never seen another type of poultry that sticks together quite like ducks. These naturally hesitant animals are fearless when they’re in a pack, holding their own against any challenge they perceive to be in their way.

That’s what I love most about them, but also what made them so difficult to raise. Our ducks stuck together and were a tight, close-knit little pack. Unfortunately, they avoided our chickens like the plague. We foolishly thought we could house our ducks with our chickens and that we did not need a separate housing system.

This was a mistake, because our ducks wanted nothing to do with our more aggressive chickens, and vice versa. We ended up losing several to weasels because our ducks were simply too hesitant to move en masse into the chicken coop at night. We tried everything we could, from locking the group in together for several days to offering them incentives to head inside at night.

At the end of the day, if one duck decided to stay out, they all stayed out.

Although ducks didn’t work out for us in our first go-around, I would absolutely raise them again. They are some of the most entertaining creatures to watch on your farm, and they offer superior eggs and meat as a return on your investment.

If you’ve never tried raising ducks before, now is the time. While there is some know-how involved in maintaining a healthy, successful flock, you can now consider yourself armed with the knowledge you need in order to be successful. 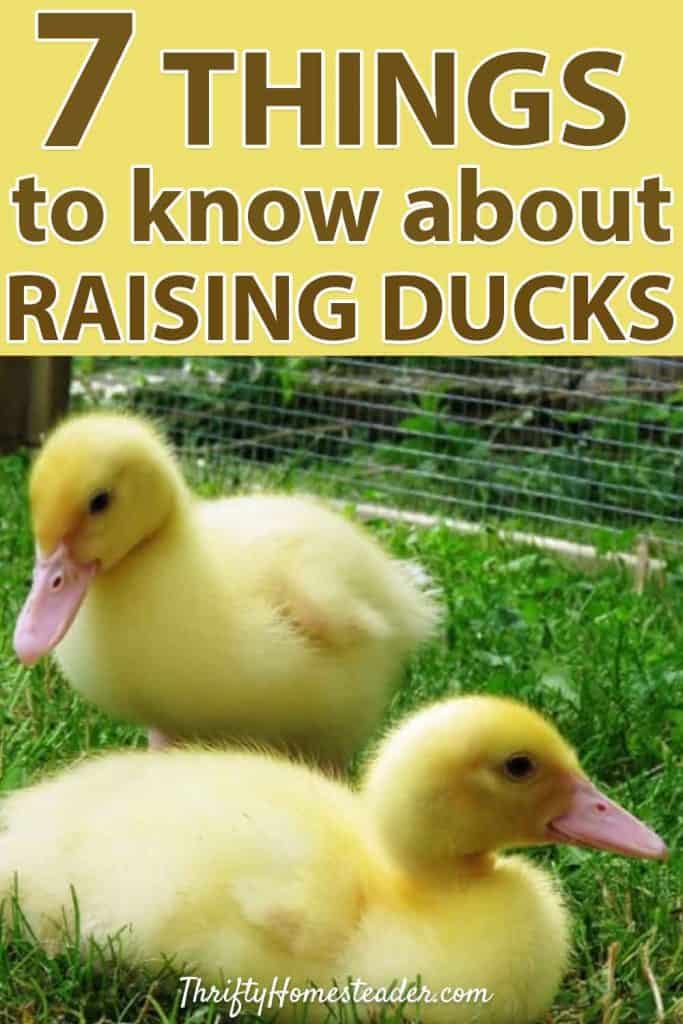