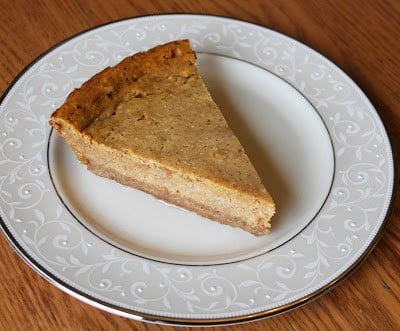 Having a hard time deciding whether you want pumpkin pie or cheesecake for dessert? You can have both in the same dessert by making this yummy, all-natural, lower-fat version of cheesecake that we make with goat cheese, more correctly known as chévre.

There are three reasons that cheesecake is not so good for you — the high-fat cream cheese that is the central ingredient, plus lots of sugar, and the large servings. We take care of the first problem by using goat cheese, and we solve the second problem by using a small amount of sugar. Use a deep dish pie pan rather than a spring-form pan, which makes a cheesecake that is twice as tall, so you can use half as many ingredients, and you’ll have a shorter finished product, which means you can cut a piece of cheesecake that has half as many calories as it’s taller counterpart. The nutrition facts below are based on a serving that is 1/8 of the whole cheesecake, which is the size pictured above, and you can see that it has only about half or a quarter as many calories as most cheesecakes. 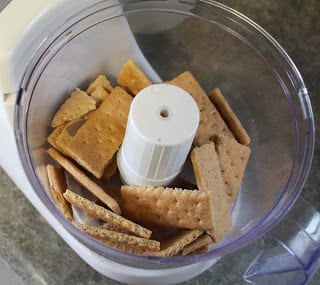 Pulverize the graham crackers in a food processor, then add the melted butter and sugar, mixing until it becomes crumbly. Press into the bottom of the pie dish then bake for 12 minutes at 350 degrees Fahrenheit.

Cream the cheese, adding milk slowly until the mixture is consistently smooth. Add the flour. Don’t over-mix — you will be less likely to have cracks in the finished product. Mix in the pumpkin, spices, salt, and vanilla, again just mixing until it is incorporated. Add the eggs one at a time. If you are using an electric mixer, you may want to allow the eggs to get about halfway blended in, then use a spatula to get them fully incorporated.

Pour the mixture into the baked graham cracker crust and bake at 300 degrees for 45 minutes. At the end of 45 minutes, turn off the oven but leave the cheesecake in there to cool gradually. Quick cooling can cause the top of the cheesecake to crack. You can remove from the oven two hours after turning off the heat. Cool in the refrigerator for several hours before serving.

Many thanks to Antiquity Oaks Farm apprentice Jane Davis for tweaking and perfecting this recipe over the past couple of months. 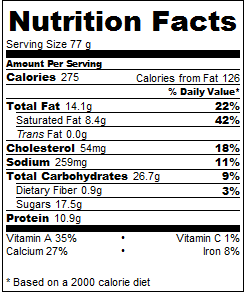 Trying to think of new things to do with all your eggs? Check out these 20 egg recipes. 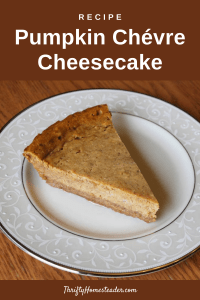 Thrifty Homesteader is a participant in the Amazon Services LLC Associates Program, an affiliate advertising program designed to provide a means for sites to earn advertising fees by advertising and linking to amazon.com. You pay the same price when you purchase through affiliate links as you would if you went directly to Amazon, and our site earns a small commission, so by shopping through our links, you are helping to support our blog so that we can continue to provide you with free content.
193 shares
193 shares