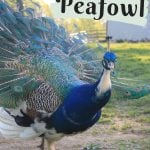 For more than a dozen years every animal on the farm had a practical purpose for being here. For example, goats give milk and barn cats kill rodents. Many animals are multi-purpose. Heritage chickens give us meat and eggs. Shetland sheep gave us wool and meat. So, many people are surprised that we have peafowl. People often ask with a smile, “Why do you have peacocks?” (because they don’t know that only the males are peacocks).

After 13 years of being super practical, two years ago I bought a trio of peafowl (a peacock and two peahens). It was not an entirely frivolous addition though. Being omnivores, peafowl eat all sorts of insects, which would include undesirable bugs like ticks, as well as snakes.

One source I read said that they’ll eat anything they can swallow. They are excellent foragers, and because they almost never go into the chicken coop, the only grain they consume is whatever is left in the wake of the chicken tractors after they’ve moved to a new location every day.

So, they haven’t cost us anything since we let them start free ranging. If we ever find ourselves with too many, we can sell the offspring or eat them. In the meantime, they add a special beauty to the farm.

Getting started with raising peafowl

I did actually try raising peafowl the first year we moved out here, but we let them outside too soon, and they left. At dusk they flew up into a tree, and we never saw them again. So, I was never going to try raising peafowl again because they are kind of pricey to buy, starting at around $50 each from a hatchery.

But two years ago, someone nearby had three chicks available for $20, so it didn’t seem like such a big risk. I really did my homework though, to be sure we didn’t lose them again.

Peafowl require a high protein starter feed. We used game bird starter from the feed store for several months. Otherwise, they are raised in a brooder and are very similar to raising chicks or poults. They need to be kept at 95 degrees the first week and can be five degrees cooler each week.

The most important thing is to keep them locked up for a few months. Once they were old enough to be outside the brooder, we put them in one of our chicken tractors, so they were moved around the yard until they were four or five months old.

Their range is a lot larger than chickens or turkeys. While chickens don’t usually go more than about 100 yards away from the coop, the peafowl go all over our 32 acres and beyond. We once got a phone call from someone half a mile away, saying that our peacock was in her yard. We knew that trying to catch him would be futile because he’d just fly up into a tree, so we hoped for the best. I was relieved to see him in our yard again the next morning.

If you start with peafowl that are all the same age, they probably won’t hatch any eggs for two years. The females ignore the males until they have a full tail, or train. It was pretty funny to watch the peacock strutting around in front of the peahens the first year. He’d scream as if someone was attacking him, and he’d shake his cute little tail, and the hens were oblivious to it. One of the hens did disappear for a few weeks last year. We assumed she was setting, but the eggs didn’t hatch because they were not fertile. The other hen never laid any eggs in her first year.

This year, however, the remaining hen (one was hit by a car last year) made a beautiful nest in a stall in the barn and sat on five eggs. Three of them hatched. You can see why no one eats peafowl eggs — and why you don’t see peafowl on the menu of even the fanciest restaurants. They don’t reproduce very fast!

Because we didn’t want to risk losing any of the three peachicks, we put mama and babies in their own private chicken tractor. Since one mama and babies don’t put much pressure on the grass, it only needs to be moved every couple of weeks. We do this with all poultry hens that hatch babies. If we don’t do it, the hens usually lose most of the babies, sometimes all of them within a couple of weeks. But if we lock them up, then 100 percent make it to adulthood. And seeing how slowly peafowl reproduce, you can understand why we don’t want to lose any of these three.

Raising peafowl may not be the most practical thing I’ve ever done on the homestead, but they do provide great entertainment value, and they’re quite beautiful.

If you have already raised chickens, it is not that different from raising peafowl, so most of the information below will also apply to raising peafowl.

Thrifty Homesteader is a participant in the Amazon Services LLC Associates Program, an affiliate advertising program designed to provide a means for sites to earn advertising fees by advertising and linking to amazon.com. You pay the same price when you purchase through affiliate links as you would if you went directly to Amazon, and our site earns a small commission, so by shopping through our links, you are helping to support our blog so that we can continue to provide you with free content.
1589 shares
1589 shares