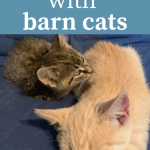 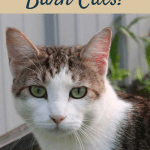 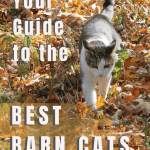 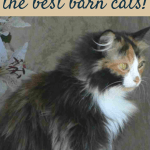 If you have a farm or a homestead, odds are good that you have barn cats, whether you planned to have them or not. When we bought our homestead, there were 15 resident cats, according to my daughter’s count. She quickly gave all of them names, and then they started disappearing or dying.

We found the remains of a couple of them in the woods, where they’d obviously met their end as someone’s dinner. Some looked sick but were feral and impossible to catch. Others became badly injured in fights and disappeared. It was quite a sad shock for a little city girl who had only experienced two healthy, well-behaved house cats in her life.

Most of the people who lived out here had a strict set of ideals when it came to barn cats. You didn’t get vaccines for them or get them spayed or neutered. They wanted cats on their farms to help with rodent problems, but they were not convinced that the cats would be around long enough to spend any money on them. It didn’t take us long to figure out why their cats were not around for very long.

A word of caution about barn cats

As pregnant women know, cats can carry toxoplasmosis, which they can give to women during pregnancy. Because the disease is transmitted through feces, pregnant women are told to avoid cleaning cat litter boxes or to wear gloves when doing it. Although cats with toxoplasmosis don’t get sick, it can cause miscarriages in humans, and unborn babies can wind up with birth defects.

This is also true for goats, sheep, and hogs, which will often abort. Luckily it is not seen in cattle much. Cats love to use the bathroom in loose straw in barns, as well as in loose dirt in the garden. So, if you’re pregnant, and you have a cat that uses the bathroom in your garden, you probably shouldn’t be ripping fresh carrots out of the ground and eating them raw.

In 20 years, we have never had a problem with toxoplasmosis (knock on wood). This may be because we have never had young cats in the barn when we have pregnant goats. All of our cats come from other farms where they were born in barns. They’ve probably been eating dead rodents, which is how cats are usually infected, since their mother first killed a mouse for them and taught them to hunt, so they’ve probably already had the disease when they arrive here.

However, when new cats arrive on our farm, we keep them in the barn office for a few weeks or sometimes months. When cats are infected with the disease, they will only be shedding the infectious oocysts in their poop for about two weeks, but the oocysts can survive in the environment and infect other animals for as long as a year, so I really don’t want them pooping in our yard or barn for at least 3-4 weeks after they arrive, just in case they happen to be in the midst of an infection.

As I said, it didn’t take us long to realize that the common wisdom around here was not a winning strategy. All 15 of the original cats had either died or disappeared within a few months of our moving here. One of the feral cats gave birth in the middle of the barn and then ran away, never to return, so we raised those five kittens on goat milk.

We began following the tips I’ve outlined above. It hasn’t been perfect because when cats live outdoors, there is always the possibility of being killed by a predator, but because they’re neutered and well fed, they don’t tend to go far from home.

Our oldest barn cat, Patches, lived to be 15 years old, and she spent almost all of her time in the house the last four or five years. She showed up here only half grown and pregnant all those years ago. After her kittens were a couple months old, we had her spayed. She was an excellent mouser up until she was about 11 or 12 when she seemed to lose interest. Then she started spending most of her time as a lap warmer for the humans around here.

Pepper, the cat in the other three photos, is one of the best rodent patrol officers we’ve ever had, killing rats, as well as mice. He is nine years old now and even catches and kills rabbits in the garden. That sounds sad, but it’s also really sad when you walk out to the garden and see that 20 or so of your pepper transplants from yesterday have been eaten down to the dirt. 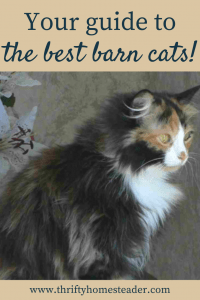 Thrifty Homesteader is a participant in the Amazon Services LLC Associates Program, an affiliate advertising program designed to provide a means for sites to earn advertising fees by advertising and linking to amazon.com. You pay the same price when you purchase through affiliate links as you would if you went directly to Amazon, and our site earns a small commission, so by shopping through our links, you are helping to support our blog so that we can continue to provide you with free content.
2723 shares
2723 shares