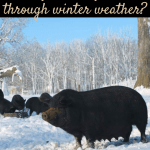 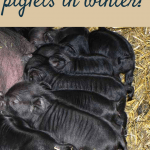 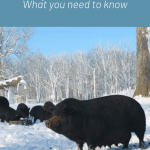 When people get their first pigs, or any livestock for that matter, they often worry about how they will handle winter. It doesn’t matter whether they’re in Missouri or Michigan. This is understandable since we wimpy humans would quickly die from hypothermia if left outside. But since animals don’t naturally live in buildings, they usually have whatever they need to keep themselves warm.

Chickens have feathers. Sheep have wool. Goats have cashmere. Cows have leather. We humans have used skins and fibers from all of these animals to keep ourselves warm throughout history. Even though I never worried about my other animals in winter, I did worry about the pigs. They look practically naked! How could they stay warm with so little hair? You can easily see their skin. But pigs have a thick layer of fat, which insulates them as well as feathers, wool, cashmere, or leather.

Like other animals, pigs in winter need shelter, so they can stay dry. We put a thick layer of straw in there also, so that will insulate them from the ground. I love the look of a group of pigs sleeping all lined up like little sausages in a package. Pigs in winter do not need any type of supplemental heat down to at least 20 degrees below 0 Fahrenheit, which is how cold it has been here. We’ve actually looked into their three-sided shelter and seen steam rising off their bodies on cold days. Yes, I said three-sided shelter, which also means pigs don’t need an insulated house during winter. The opening to the three-sided shelter should be on the side opposite the prevailing winter winds in your area. Here that means that we have all of our shelters opening on the south side, as we have wind that is usually from the north, although sometimes from the west or northwest in winter.

The biggest challenge with pigs in winter is providing them with water that won’t freeze. We made the mistake of having a floating tank heater our first winter with pigs. They thought it was a toy and yanked it out and dragged it all over the pasture. We have a very low-tech way of providing them with water. We give them warm water twice a day in a feed pan with straight sides (so it’s harder to tip over). Luckily they don’t drink nearly as much water during the winter, or we’d have to refill the water more often.

What about piglets in winter?

Living in Illinois, we have made a point of never breeding pigs to farrow from December through February, which are our coldest months. We have had pigs farrow in November a couple of times. Although we normally let our sows give birth on pasture wherever they choose, we did put them in the barn for November farrowing so that we could provide a heat lamp for the piglets. We have American Guinea Hogs, which are only about one pound each when born.

We let them into the pasture when they’re two months old, and they’ve always done great. Basically we take our cues from the piglets. When we see that they are no longer laying under the heat lamp, we assume they don’t need it, so we put them outside.

Actually the most dangerous weather for young piglets is when it’s in the 30s or 40s and muddy. In the summer, pigs lay in mud to cool themselves. The wet mud wicks the heat from their body. So, mud in winter can be deadly for piglets. If adults are only getting their feet in the mud, that’s not a big deal. But piglets can wind up with half of their body covered in mud, which can lead to hypothermia.

It is also extra important to be sure you have a thick bed of straw for piglets. In addition to lining themselves up like sausages to keep each other warm, they will also burrow down into straw.

As I always say, watch your animals, and they’ll let you know what they need. As you can see from the top photo, a little snow doesn’t bother them at all.

Subscribe to get our weekly newsletter, and we’ll send you a copy of “Winter on the Homestead,” which gives you information about caring for your chickens, ducks, turkeys, and goats through the winter — including how to deal with kidding!

21 thoughts on “Pigs in winter weather”

Thrifty Homesteader is a participant in the Amazon Services LLC Associates Program, an affiliate advertising program designed to provide a means for sites to earn advertising fees by advertising and linking to amazon.com. You pay the same price when you purchase through affiliate links as you would if you went directly to Amazon, and our site earns a small commission, so by shopping through our links, you are helping to support our blog so that we can continue to provide you with free content.
1254 shares
1254 shares