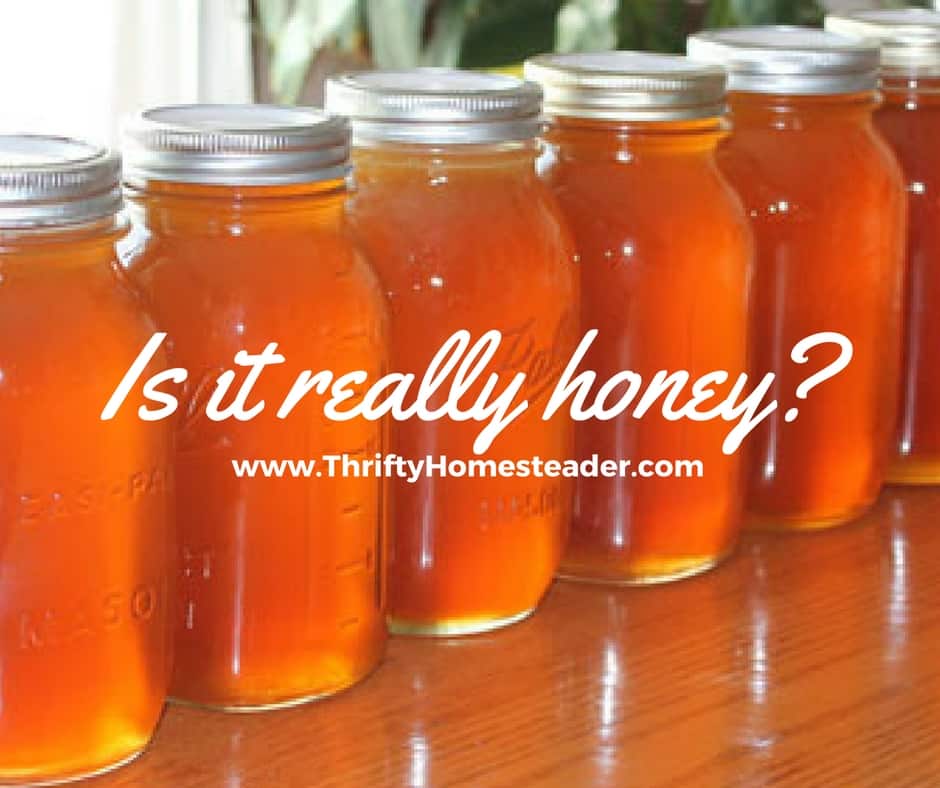 A couple of weeks ago, I told you about adulteration and fraud in the olive oil industry. Even though there are laws about labeling olive oil, those laws are not enforced. The situation with honey is even worse.

When doing research for the second edition of Homegrown and Handmade, which will include a section on beekeeping, I learned the depressing truth. Basically, if you buy something labeled as honey, you are trusting that the supplier really put honey in that jar. There is no legal requirement for honey to be accurately labeled. That means a jar of honey could be anything.

In 2006, the American Beekeeping Federation and several honey organizations asked the FDA to create guidelines for labeling honey because they realized they were facing unfair competition if anyone could label any sweet liquid as honey and price it far below the actual production cost of real honey.

In 2014, there was a huge buzz that the FDA had written guidelines for labeling honey and was soliciting public comment. However, two and a half years later, they still have not approved those guidelines. The sad thing is that they would only be guidelines – as if the fakers didn’t know they were mislabeling a sweet liquid as honey. The guidelines merely state how honey and honey blends “should” be labeled. Even if the guidelines had been approved, there would be no law and no enforcement.

If you don’t produce your own honey, this is a good reason to buy from a local beekeeper who you know and trust. Cheap honey sold in stores is usually imported, and there have been cases where the contents of the jars turned out to be corn syrup or sugar blends, rather than pure honey. Americans use about three times as much honey as what is produced in this country. Not only will you not get any of the health benefits of honey if it’s a blend, those with a corn allergy will actually get sick if the honey is blended with corn syrup.

How do you know if it’s real honey? Real honey crystallizes. If you’ve had a jar of “honey” sitting in the cabinet for months, and it is still crystal clear, then it’s not pure honey. Fresh honey is also thicker than corn syrup or other sugary liquids. Looking back years ago when we had small children and were on a tight budget, I’d buy the cheapest of everything. I clearly remember those thin honeys that sat in the cupboard and never crystallized. As with olive oil, if a particular brand of honey is priced way below the competition, it’s probably fake or adulterated.

7 thoughts on “Is it really honey?”

Thrifty Homesteader is a participant in the Amazon Services LLC Associates Program, an affiliate advertising program designed to provide a means for sites to earn advertising fees by advertising and linking to amazon.com. You pay the same price when you purchase through affiliate links as you would if you went directly to Amazon, and our site earns a small commission, so by shopping through our links, you are helping to support our blog so that we can continue to provide you with free content.
84 shares
84 shares