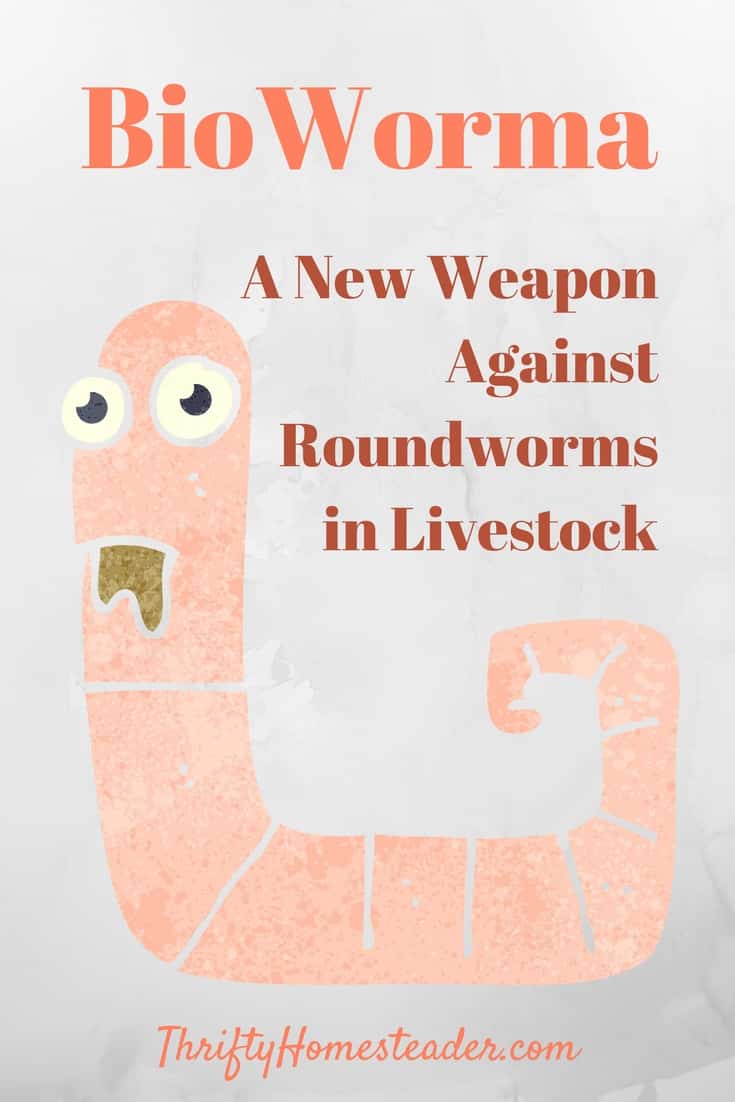 Later this month, there will be a new product on the market in the US and New Zealand that farmers and ranchers can feed to their livestock to reduce their burden of roundworms. In goats and sheep, that includes the infamous barber pole worm, as well as bankrupt worm and brown stomach worm.

The good news is that BioWorma is not just another chemical dewormer, which worms can become resistant to. It’s Duddingtonia flagrans, a natural fungus that eats the worm larvae in manure. Fungal spores are added to the livestock feed and go through the animal’s digestive tract unchanged. After the manure lands in the pasture, the fungus goes to work eating the larvae as the eggs hatch in the manure. This breaks the life cycle of the roundworm, which gets out of control because animals are continually re-ingesting larvae from the pasture. (That’s why pasture rotation is so important.) In fact, it is estimated that 90 percent of worms on a farm are actually in the pasture rather than inside animals.

D. flagrans exists all over the world in a natural state, and is genetically the same regardless of where it is found. Researchers have been studying its use as a biological control for about 20 years now. It’s been studied in a variety of livestock, from sheep in Sweden, calves in Mexico, and goats, as well as sheep in Brazil. If you like to read scientific research, you can keep yourself busy for a couple of days. Just search for “Duddingtonia flagrans,” and you’ll find dozens of published studies.

Because this fungus is a very picky eater, you don’t have to worry about it upsetting the balance of anything else in the environment, such as earthworms or soil nematodes. The fungus only consumes roundworm larvae in manure of grazing animals, so it won’t work with poultry. Since it is eating the larvae, not killing them, it’s unlikely the larvae will become resistant to them the way they become resistant to chemical dewormers. (Has anything ever become resistant to being eaten?)

It’s also important to understand that the fungus does not consume 100% of the larvae, so things like pasture rotation are still important. Animals have lived with parasites inside their bodies since the beginning of time, and it’s not an entirely bad thing. We just don’t want the worms to get out of control and make the animals sick, and that’s exactly what the research showed. The fungus reduced the worm load enough that animals did not need chemical deworming.

This product won’t be for everyone, but I do see it as a lifesaver for those who are losing animals to worms because of dewormer resistance.

For a better understanding of how it works, check out the video below.

32 thoughts on “BioWorma: A New Weapon Against Roundworms in Livestock”

Thrifty Homesteader is a participant in the Amazon Services LLC Associates Program, an affiliate advertising program designed to provide a means for sites to earn advertising fees by advertising and linking to amazon.com. You pay the same price when you purchase through affiliate links as you would if you went directly to Amazon, and our site earns a small commission, so by shopping through our links, you are helping to support our blog so that we can continue to provide you with free content.
520 shares
520 shares