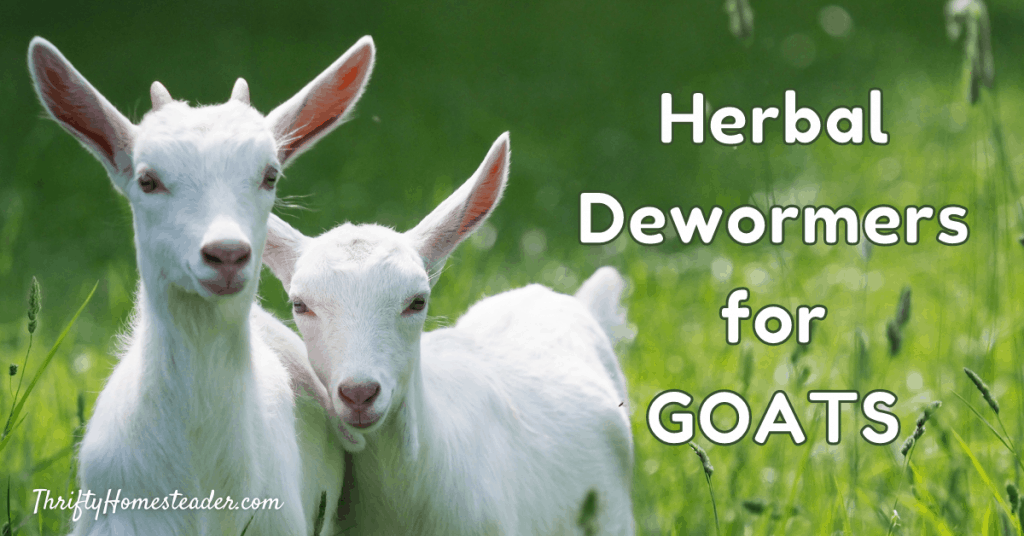 Every once in a while, I get an email from a fellow goatherd asking why I don’t recommend herbal dewormers for goats. Although I’ve used them, and I’m not opposed to using them, I only recommend treatments that have the research behind them that prove they work. Without such research on herbal dewormers, I’m not going to make a recommendation that could wind up causing someone to lose a goat with a heavy worm load.

Unfortunately, the research on the efficacy of herbal dewormers just isn’t available yet. And when using an herbal dewormer with goats, it’s not as straight forward as measuring out a dosage of a chemical dewormer.

We Tried Everything, Even Herbal Dewormers

When we first started raising goats, we came to the harsh realization that our herd had developed dewormer resistance within about three years. Treating our goats with chemical dewormers simply did no good, and we were slowly losing our herd to parasites.

At that time, I was willing to try anything and everything to save my goats: enter natural dewormers. Back then, there were three popular herbal goat dewormers on the market, and we tried all of them. In fact, I was using two times the recommended amount, administering it daily for several days, and doing fecal tests before and after. Unfortunately, there was no difference in before and after fecals, and we lost a buck while using the herbal dewormers.

The Research on Herbal Dewormers and Goats

Like many other goat-related topics, the research on herbal dewormers is lacking. But there is one published study on the use of herbal dewormers in goats. This study was controlled, meaning they split goats into two groups. Both groups had an identical amount of worm loads, to begin with. Then, they infected the goats in both groups with the same kinds, and amounts, of worms.

The goats in the control group weren’t treated with the herbal dewormer, while the goats in the second group were. They concluded that, statistically, there was no difference between the two groups and the worm load after giving the test group the herbal dewormer. Actually, if you look at the numbers in this study, the herbal group had more worms after administration. But this wasn’t considered statistically significant for the purpose of the study.

At one point, I thought an herbal dewormer had worked for one of my does. After giving her half an ounce of wormwood, her symptoms improved. Her poop when from a log to typical goat berries and her milk supply normalized. So it was encouraging! But the excitement was short-lived because after doing a fecal, we learned that the herb had killed only 50% of the worm load, which is nothing to get excited about.

If researchers do a study on any kind of dewormer, and it only kills 50% of the worms, they are going to say it didn’t work. When a goat is severely debilitated, you want as close to 100% kill rate as possible. If it kills even 90%, your goat could still die.

So, what this might actually end up coming down to, is the health of the individual goat. Some goats, with good immune systems, can handle worms better than others. So, if someone gives their goat an herbal dewormer and it kills a mediocre percentage of worms, it could make that goat look better, so the owner thinks it worked.

On the other hand, goats with underlying health issues or nutritional deficiencies may succumb to worms easier than an otherwise healthy goat.

If you’re willing to take a risk and test out herbal dewormers on your herd, the best way to ensure they’re working is to do before and after fecal counts.Always remember that a little improvement might be encouraging, but it might not be enough for your goat to fight the parasites the dewormer did not kill.

Natural Goat Dewormers in Your Environment

One of the more popular natural dewormers is mugwort, which is part of the wormwood family.

When I tested mugwort and wormwood, I utilized it as a dried herb, a tincture, and in its freshest form. In fact, I grew my own wormwood (which I was fairly lucky with because it’s actually a naturally occurring weed in the midwest).

After testing the wormwood and mugwort, and conducting before and after fecal counts, I found that it works if administered in large amounts. Unfortunately, it didn’t work consistently and I don’t feel comfortable telling someone with a severely debilitated goat to try it.

One thing to keep in mind, if you’re growing wormwood, is that the number of active ingredients in the plant will vary from one year to the next. That’s the thing about natural dewormers; they’re usually grown in an uncontrolled environment, and you have no control over the active constituents, which can vary from one area to another or one growing season to the next.

The makeup (and active ingredient) will depend on things like rainfall, nutrients in the soil, and other unknowns that we just don’t have the capability to test. Each year would be a brand new trial, if you were hoping to grow your own dewormer.

A Natural Dewormer That Actually Works

Management is the Most Natural Way to Prevent Goat Worms

Ever since we’ve focused on barn hygiene, rotational grazing, and meeting our herd’s nutritional requirements, we’ve rarely had to deworm our goats. In fact, in the last year, only one doe needed deworming after the stress of kidding. Some of my goats have never had a dewormer in their lives.

My bucks never need dewormers; they just don’t go through the same stress a doe goes through during kidding and lactation. So our bucks don’t usually have a problem with worms due to our  management practices. Unless, of course, there’s an error on our part.

For example, one time we moved our bucks back into a pasture too soon, and one of them got an overload of worms. Had we waited two or three months for the pasture to rest, it’s unlikely our buck would have needed deworming.

All this to say, if you’ve been wondering why I don’t recommend herbal dewormers, it’s because it’s still very experimental and results are not predictable. Moreover, there are too many factors at play.

Instead, I encourage good management practices, the use of copper oxide wire particles, and chemical dewormers when necessary to save a goat.

For more information about goats and worms

Bioworma: A New Weapon Against Roundworms in Livestock

Copper Oxide as a Dewormer (podcast) 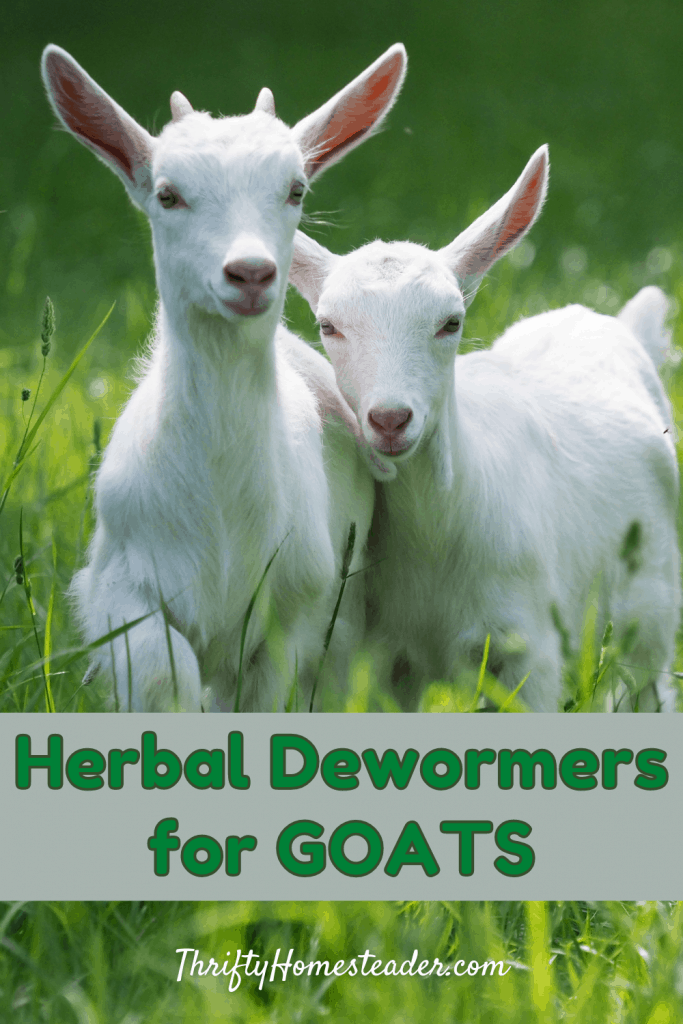