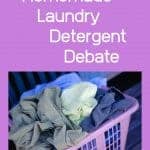 When I wrote EcoThrifty it seemed that there were dozens of people around the web who were talking about making your own laundry detergent at home. I quickly realized all of them were using pretty much the same recipe: borax, washing soda, and a grated bar of soap. I wanted to include homemade laundry detergent in my book, but I had a few problems with that popular recipe and chose not to include it in my book.

Recently, bloggers have hit the web talking about that popular laundry detergent recipe ruining washing machines and trapping dirt in the fibers of clothes. A friend who had to buy a new washing machine when hers was ruined by a homemade laundry detergent is the one who told me about this whole controversy. They are saying what I assumed — the soap doesn’t really do much for cleaning the clothes.

I didn’t include that popular recipe because I was worried about the soap dissolving in the water quickly enough that there wouldn’t be tiny bits of soap in the rinse water. Second, I was skeptical about a small amount of soap actually cleaning clothes. Third, I didn’t have time to grate up a bar of soap! You know, I’m busy and always looking for ways to save time.

Former homemade laundry detergent users are “stripping” their clothes. That means they soak them in a variety of different things, including borax and washing soda.

There are a dozen or so pictures here of the dirty soak water. In the comments on blogs and Facebook pages, some people have said that they had the same results when “stripping” their clothes, which had been washed in commercial detergents.

Some people are making a big deal of the fact that the homemade recipe was not really detergent because detergents are made with surfactants. Yes, it’s true that it’s not technically a detergent.

According to the 20 Mule Team website, “Asides from breaking down acidic or protein-based dirt, borax also maintains a negative electrostatic charge between the fabrics and dirt. This makes it so they repel each other while in the wash, and keeps dirt and soil from getting re-deposited onto your clothes and fabrics.”

The washing soda is responsible for neutralizing and eliminating odor in clothes. It’s almost the same thing as baking soda, and think about how many people use that to eliminate odor in their carpet, refrigerator, car, and other spaces.

I recalled that when our babies were little, we always soaked the cloth diapers in borax before washing them, and we always had beautiful white diapers through three sets of baby bottoms for eight or nine years.

So, I decided to see what happened if I simply mixed borax and washing soda and used that for my laundry. It worked! I was quite skeptical when I tossed my goat birthing overalls in the washing machine — blood, birth goo, poop, pee — but they came out looking great and smelling fine.

I had continued to cut back on the amount I used until it was only 1/8 cup in my high efficiency machine, but that still worked. So, the recipe of 50/50 borax and washing soda went into my book.

Since the borax and washing soda combo does such a great job of stripping clothes with zero agitation — it just sits there and soaks — it seems obvious to me that these are a couple of excellent clothes cleaners. (Remember, they are not technically detergents.) So, forget the “popular” homemade “detergent” recipe and just use the Ecothrifty laundry cleaner — a 50/50 mix of washing soda and borax. If your clothes look a little extra dirty, let them soak before washing. If they’re a little extra stinky, add a bit more washing soda.

Imagine for a moment how powerful a fragrance needs to be to stay in your clothes after being diluted in the washer. It has to be a pretty potent synthetic fragrance, which is not good for you. And who wants to put expensive, high quality essential oils in the washing machine when 99 percent will be washed down the drain? So, if you really want your clothes to smell like something, you can add some essential oils to a wool dryer ball.

Just because the common homemade detergent recipe isn’t looking so great does not mean that you have to go buy toxic detergent at the grocery store or spend more money on all natural ones at the health food store. You can still make your own laundry cleaner at home with inexpensive, natural ingredients.

Does store-bought soap make you itch or sneeze? Read Why I’m still making soap after all these years

Thrifty Homesteader is a participant in the Amazon Services LLC Associates Program, an affiliate advertising program designed to provide a means for sites to earn advertising fees by advertising and linking to amazon.com. You pay the same price when you purchase through affiliate links as you would if you went directly to Amazon, and our site earns a small commission, so by shopping through our links, you are helping to support our blog so that we can continue to provide you with free content.
664 shares
664 shares