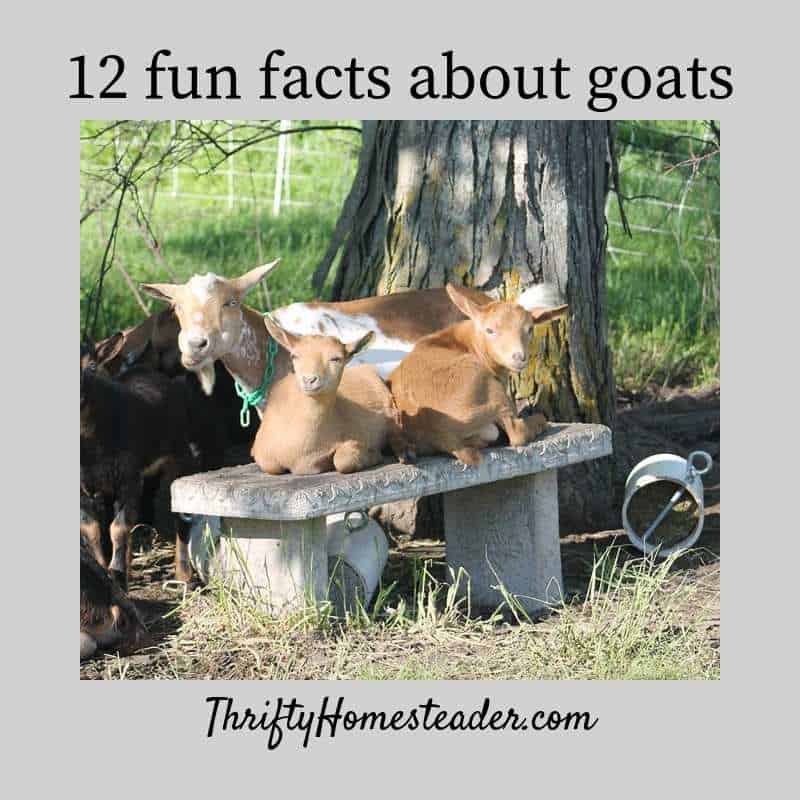 It probably comes as no surprise to hear that goats are my favorite animals. In addition to their incredible personalities, they are also just really fun creatures. But they are also misunderstood, so here are a few fun facts.

Goats are browsers, not grazers 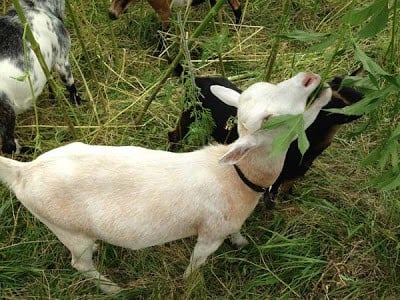 No, that does not mean that they prefer walking through the farm supply store checking out the latest goat accessories. Browsers are animals that prefer to eat leaves, overgrown weeds, small bushes, and baby trees, rather than grazing grass. So, if you have overgrown, brushy property, rather than pastures of lush green grass, you would provide a heavenly home for a goat! 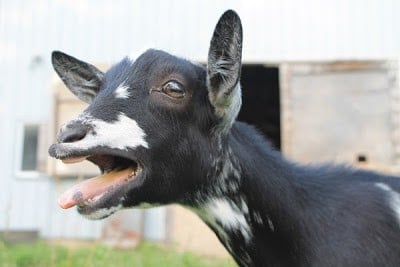 Their bottom teeth serve just fine for ripping off leaves, stripping bark from trees, and ripping up grass and weeds. They do have molars on both top and bottom, however, so if a baby goat ever wants to suck on your fingers, be careful that you don’t accidentally let your finger slip between their teeth in the back of their mouth, or you could be in for a painful surprise!

Probably the most well-known myth about goats is that they eat tin cans. And while this is an entertaining fable to relate to a goat’s desire to “test” just about everything, they are not actually capable of eating a tin can. Because they don’t have front top teeth, they obviously can’t bite through metal. However, goats are famous for taste testing just about everything! Clothes, plastic bags, mail, newspapers, and labels off tin cans — but not tin! Goats actually have a pertty sensitive digestive system, which can be upset fairly easily. 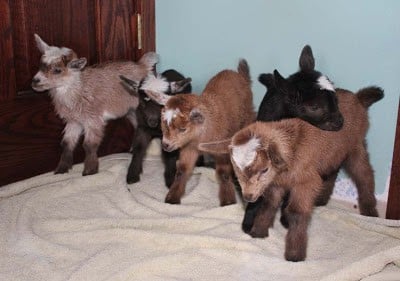 Although goats most commonly give birth to twins, it is not unusual for yearlings to have a single kid. Triplets are not unheard of, and Nigerian dwarf dairy goats may even have quadruplets and sometimes more! The tendency to have multiples definitely runs in families. If a doe’s dam (mother) had multiples, she is more likely to have multiples also. We had one doe named Coco, who had quadruplets three times and quintuplets twice! The picture is Coco’s second set of quintuplets, which were born in March 2013. The doeling on the left is Bella, who still lives here, and she usually has triplets.

Goats communicate with one another

Just moments after the birth of a kid, both mother and baby goat recognize and respond to each other’s voices. And it isn’t just recognizing the roles, but communicating between each other. Goats talk to each other through the sounds they made, which is called “bleating”. And mother goats use this communication to keep an eye on their kids, by calling to them periodically to make sure they are still close by. 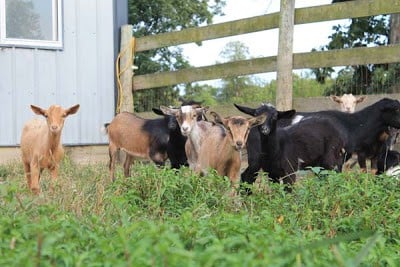 That means that you can’t have just one. Being prey animals, goats know there is safety in numbers. After all, it doesn’t matter how fast I can run if at least one other goat runs slower than me, she’ll get eaten instead of me! Maybe goats don’t actually think through it to that level, but they are definitely unhappy and insecure if they are alone. The goats in the above picture are in a half-acre pasture, but they are all sticking together in their herd. It isn’t any harder to take care of two or three goats than one goat, and one goat will forever be getting itself into trouble because it will be lonely and unhappy. It may walk around loudly calling for a friend, or it may turn into the world’s best escape artist, trying to find a goat friend. Although there have been a few single goat success stories, there is simply no good reason to try having a single goat. Remember, a lone goat is a lonely goat!

Yes, it’s true! Just like humans, goats can have accents in their voice based on the herd they grew up in. A study by the Queen Mary University of London found that goats will develop different accents as they age and become part of different herds. They found this to be true as goats in different herds will “talk” with sounds very similar to each other, which differs largely from herd to herd. The only other animals thought to do so are elephants and dolphins.

Goats, octopus, and toads have something in common 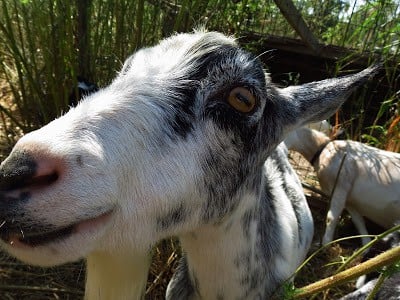 All of these species have a rectangle shaped pupil which is different than the round pupil humans and most animals have. The reason behind this is that when dilated, rectangular pupils get very narrow, giving an animal excellent depth perception in their peripheral vision. This helps these species keep an eye out for predators. 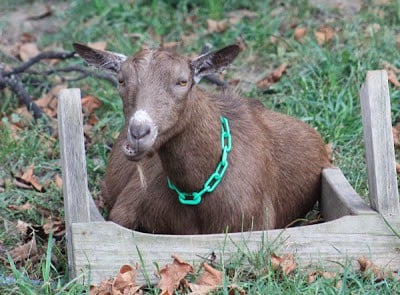 Just like cattle or sheep — and 200 other species of mammals — goats chew cud as a part of their digestive process. They have a four-chamber stomach that food must pass through in order to be fully digested. The process begins in the first compartment softening the plant-based food, then regurgitating the food where it is re-chewed, also known as “chewing cud.” This helps to further break down the food and to stimulate digestion. The entire process is called ruminating. This is why you see goats lying in the pasture chewing, even though you have not seen them actually eating anything.

If you love coffee, thank goats! According to the National Coffee Association, a goat herdsman by the name of Kaldi started to notice his goats becoming very hyper after eating a foreign plant. They had so much energy that the goats had trouble sleeping at night. Kaldi reported his findings to the local monastery where the plant was experimented with and made into a drink. The abbot of the monastery soon began to feel the effects of the new beverage as he was alert and up in the long hours of the night, which benefited his evening prayers. News soon spread of the beverage and after reaching the Arabian Peninsula, it went global.

While numerous people have heard of “fainting goats,” many are unaware that this is actually a genetic mutation or condition. It’s called congenital myotonia, and it’s a temporary paralysis of the muscles in a goat that occurs when it panics or is frightened. Another name for fainting goats is myotonic goats. The animals are unharmed during the “fainting” process. Some goats learn to cope with this disorder and have actually learned to brace themselves during one of these episodes to prevent themselves from falling.

Goats were once used as companions for horses 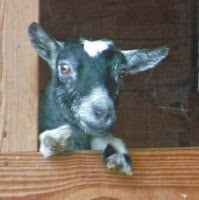 Although it is no longer recommended, goats were once used as close companions for racehorses. Horse trainers believed goats had a calming effect on the horses, which would help the horses prepare for a big race. The term “get your goat” is thought to have originated from the practice of stealing a companion goat of another horse so as to increase your chances of doing well in the race. 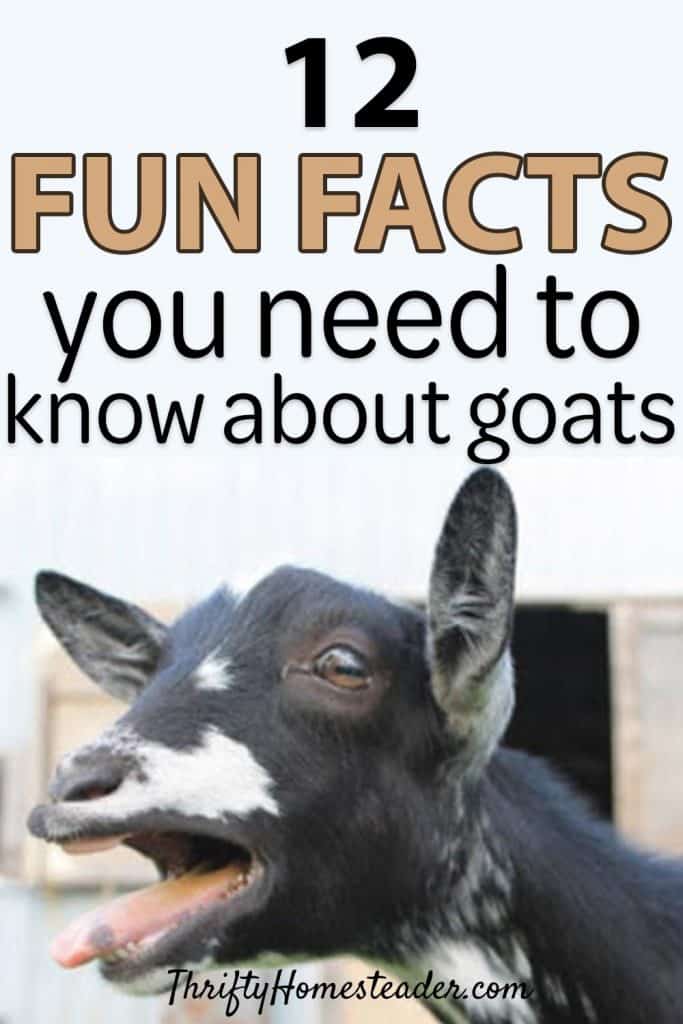 6 thoughts on “12 fun facts about goats”

Thrifty Homesteader is a participant in the Amazon Services LLC Associates Program, an affiliate advertising program designed to provide a means for sites to earn advertising fees by advertising and linking to amazon.com. You pay the same price when you purchase through affiliate links as you would if you went directly to Amazon, and our site earns a small commission, so by shopping through our links, you are helping to support our blog so that we can continue to provide you with free content.
2479 shares
2479 shares