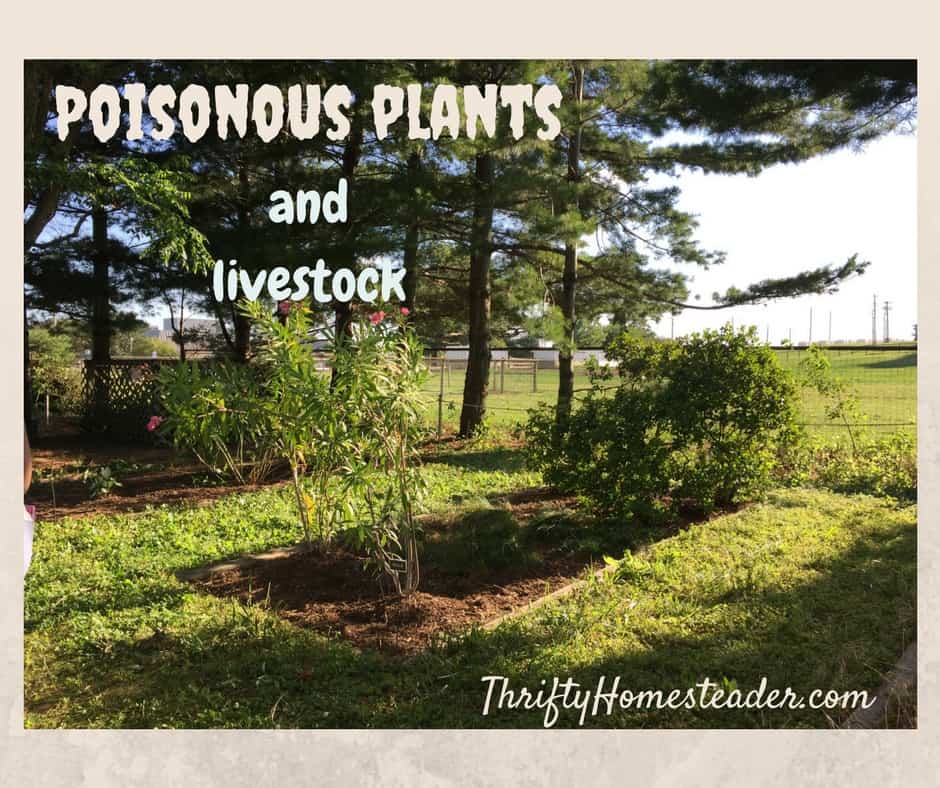 A couple of weeks ago I visited a poisonous plant garden. No, it wasn’t at Hogwarts. It was at the University of Illinois. Don’t go looking for it. You won’t find it. It is hidden away behind the school of veterinary medicine. Since the plants are poisonous, they don’t want people taking self-guided tours and potentially poisoning themselves.

Our tour was coordinated by The Land Connection and led by Dr. Michael Biehl, clinical professor of toxicology at the vet school. I was hoping to learn about what poisonous plants are really dangerous to goats because I’ve never seen an accurate list, but unfortunately the professor did not have a lot of experience with goats. That’s why this post is not entitled “Poisonous plants and goats.” One thing that was repeated often was “the dose makes the poison.” I knew that, but I had no idea how many plants in the pasture are technically poisonous.

For example, lambs quarters, which some people call wild spinach, contains nitrates and oxalates. I was really surprised to hear this because I have eaten lambs quarters. It grows wild on our farm. Too much of it, however, can cause “headache, flushing skin, vomiting, dizziness, and reduced blood pressure” according to the handout we were given. I know our goats, sheep, and cattle eat this because it grows all over our farm, but no one has ever gotten sick. Coming home and searching online just confused me even more because the vast majority of info out there talks about how it’s edible and even medicinal, such as this interesting post. According to this article, the oxalic acid is neutralized when cooked, just like spinach, however, I’ve eaten it raw, so I still have questions.

Corn and soybean plants were also listed as poisonous. Both contain nitrates, and soy is a protease inhibitor, which can cause diarrhea, vomiting, tremors, difficult breathing, and convulsions. Corn may have dangerously high levels of selenium, as well as mycotoxins when moldy, but I know plenty of farmers let cattle graze on corn stubble in the fall. The green foliage and unripe fruit of ground cherries, which also grow wild on our farm, contain solanine and atropine-like alkaloids, which can cause “CNS depression, rapid respiration, nausea, diarrhea, muscle weakness, paralysis.” I think our sheep may be smart enough to avoid these, or they don’t eat many, because I see a lot of these in our sheep pasture, even when sheep have been in a pasture for awhile and we’re rotating them out to greener pastures.

Another bit of information I found interesting is that many grass seeds can have a toxic fungus on them called ergot, which is another reason it’s not a great idea to let your pasture grasses go to seed. (Grasses are also not as nutritious or tasty after going to seed.) We have grass going to seed every year, but this has never been a problem on our farm. And it’s tempting to not even mention it. However, recently someone on a Facebook group had a goat that died from apparent poisoning, and she couldn’t figure out what it could have been because there was nothing new in her pasture. Unfortunately I don’t remember the person who posted or even the group, but I wonder if she may have had some grass that had gone to seed. You can see the fungus on the seed, if it’s there. Ergot poisoning affects cattle most often, so even if the fungus is present in grass seed in your pasture, it may not be a problem with sheep and goats. Or it might only affect one or two, rather than everyone. If you click on that link, you can see a seed head that has ergot fungus on it. It’s the dark brown specks.

Like everything else in veterinary medicine, most of the info on poisonous plants focuses on dogs, cats, and horses. Those of us with sheep, goats, and pigs are really on our own. Sheep and goats are minor species, and since commercial hogs are now raised in confinement, the risk of plant poisoning is non-existent because they have no contact with living plants. However, black-eyed susan was listed as possibly causing comas in swine.

Confused yet? Are you wondering why I even bothered writing a blog post with so little actionable information? Shortly into the garden tour I was wondering if I’d wasted several hours driving down there and attending, but I did ultimately pick up some good tips, even though I don’t have an accurate list of poisonous plants that you need to eliminate from your pasture. These two points explain a lot …

Bottom line is that there are a lot of plants out there that contain poisonous components, many of which we eat, such as spinach, beets, and peanuts, which are high in oxylates. So, if you ate nothing but that one food, you might not feel too great. But we don’t do that. We eat a variety of foods, and so do pastured livestock. So, as long as the dose isn’t huge, and as long as they’re eating a lot of other foods, you are unlikely to have a problem with some plants that are technically poisonous.

This reminds me of one of the only goat poisoning stories I’ve ever heard. A woman who was a member of my goat group several years ago had goats in a pasture with oleander, which is one of the most toxic plants known to science. They appeared to avoid it and were fine for months, but when everything else in the pasture was eaten down, several of them got sick, and at least one of them died. So, that’s another thing to keep in mind — when animals have options, some may be smart enough to avoid poisonous plants (or not eat enough to make themselves really sick).

If you have horses or cattle, the lists of poisonous plants seem to be pretty accurate. However, for those of us with other livestock, we would be whacking down and digging up a lot of plants unnecessarily, if we followed the advice on those lists. Another thing I learned is that horse owners are not picky about their hay for no reason. Horses seem to be more sensitive to poisonous plants than other livestock, which is why owners prefer hay without weeds.

My advice for those of us with sheep, goats, and pigs has been to ask other owners in your area which plants are poisonous. For example, maple and oak leaves are often listed as poisonous, but our farm is called Antiquity Oaks because it’s covered with burr and white oak trees, and our goats have eaten oak leaves when green and brown and as buds, and no one has ever had a problem. We also have a lot of maple trees, which have never been a problem.

I will remain on the lookout for an accurate list of poisonous plants for goats, and I’ll let you know when I find one. If you have one that’s accurate, please post in the comment section below!

26 thoughts on “Poisonous plants and livestock”

Thrifty Homesteader is a participant in the Amazon Services LLC Associates Program, an affiliate advertising program designed to provide a means for sites to earn advertising fees by advertising and linking to amazon.com. You pay the same price when you purchase through affiliate links as you would if you went directly to Amazon, and our site earns a small commission, so by shopping through our links, you are helping to support our blog so that we can continue to provide you with free content.
355 shares
355 shares