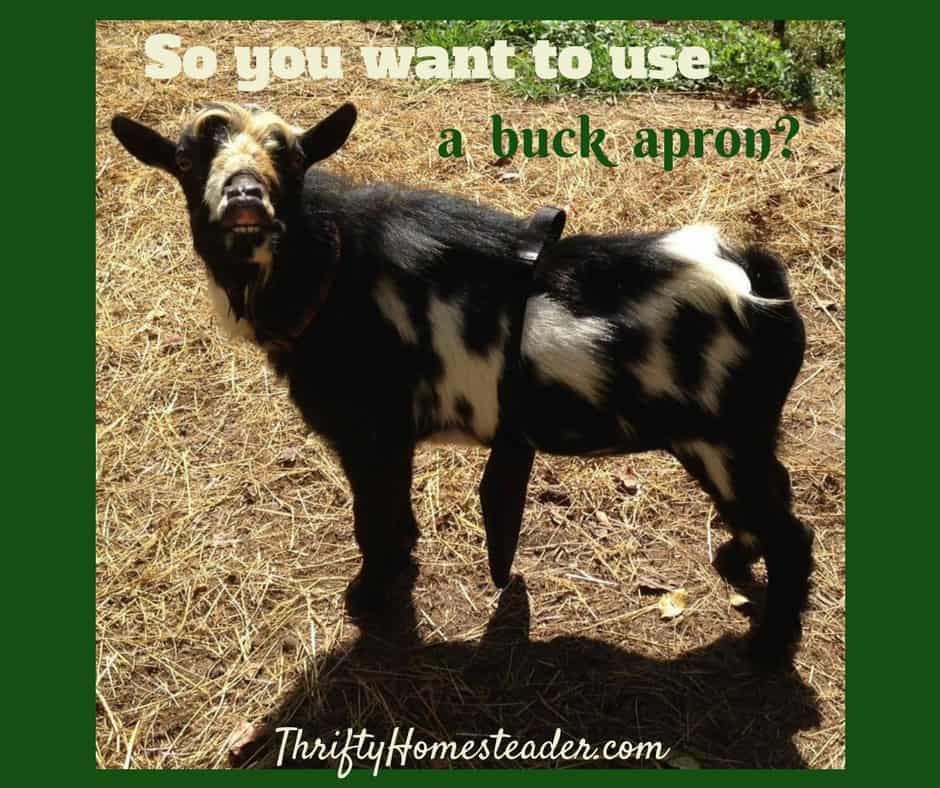 There is really nothing new about buck aprons, but they are new in the US and Canada, and lots of people are asking about them. Does a buck apron work? Should you buy one or make one? How do you use a buck apron? Should you use one? But first, let’s start with a simpler question…

What is a buck apron?

A buck apron looks a lot like a human apron that is tied around a buck’s waist. It creates a barrier, which theoretically makes it impossible for him to breed does. In some designs, there is a weight at the bottom of the apron that keeps it hanging straight down under the middle of the buck’s body.

Why use a buck apron?

Historically, they’ve been used because people didn’t keep their bucks and does separated. In some parts of the world, they don’t fence their livestock, so bucks and does are together all the time.

Today, some people with smaller herds want to use them because they may have only one buck, and they don’t want to put him in a pen all by his lonesome self. (Goats are herd animals and hate being alone!)

Karen Stark of OOH RAH Dairy Goats in Rockwood, TN, uses buck aprons for bucklings that she does not want to wean yet. Because some bucklings can breed earlier than others (and you don’t know which ones can do it until it’s too late) most people separate them from their mothers around 2 to 3 months of age. But by using buck aprons, Karen has been able to leave them together longer.

Karen said there is also an unexpected benefit of using a buck apron. “The apron prevents the buck from peeing on his face as much. He’s able to get it a bit, but not a direct hit. And the front legs are blocked entirely, so I guess that’d help with urine scald.”

How do you use a buck apron?

It’s not quite as simple as just putting the apron around the buck’s middle section. “One problem people have is keeping the apron too tight. If it’s too tight, it CAN be turned around to the side and stay there, allowing him to breed. Not to mention being uncomfortable!” says Karen, “There’s a ‘sweet spot’ where the apron is tight enough to stay forward, but loose enough to swing freely side to side, allowing the weights to keep it centered below him.”

Because bucks pee on the apron, they need to be cleaned periodically. “I hang it on a fence post when I’m done using it for a week or so and let the rain clean it off for me,” Karen said. “Could also hit it with a strong hose I’m sure, but I didn’t relish the blech splashing off onto me. LOL.”

That depends on who you ask. Karen has had great luck with House of Bacchus buck aprons. She’s used them on Nigerian dwarf, Oberhasli, LaMancha, and Nubian bucklings.

Deb Flint of Dancingdragon Goat Farm in Columbia, KY, made a few different ones for her Nigerian dwarf bucks from plans she found online, and none of them worked. She found them unhooked, untied, or moved to the side, and she wound up with kids from some of the does that were pastured with the bucks wearing aprons.

Why NOT use a buck apron?

Obviously, the aprons don’t work 100 percent of the time. So, it’s probably not a great strategy to use that as your only means of birth control in your herd. I would definitely not assume that I could let all the bucks and does run together, if the bucks are wearing aprons. DNA testing all of your kids five months later could get expensive.

Second, this is not a great option for dairy goats, if you’re talking about a mature buck. Even without the risk of pregnancy, those with dairy goats keep the bucks separate because if a buck is with does, he’ll be rubbing on them, and you will have stinky milk. Who wants milk that tastes like you just licked a buck?

Have you used a buck apron?

Since I’m not keeping any bucklings this year, and I am not going to put mature bucks in with my milkers, I’m not able to test out a buck apron with my goats. Have any of you used a buck apron? What kind? How did it work for you? Do you have any tips that could help others? Share in the comment section below.