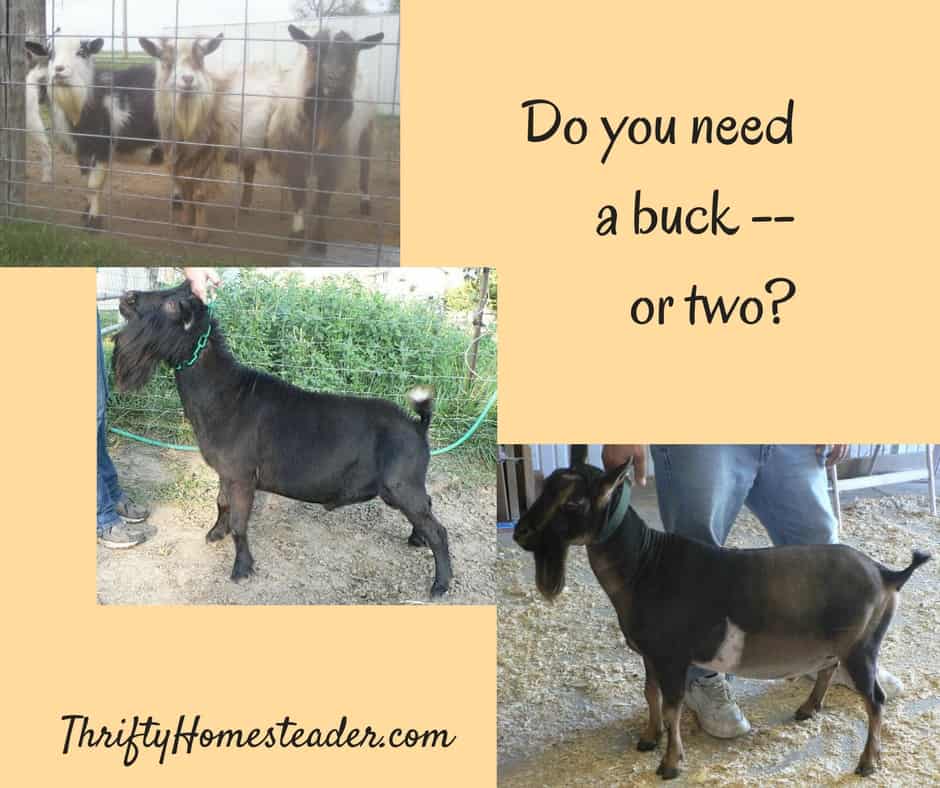 Last week, we talked about how many does you need to start your herd. But if you want milk or meat, those does will have to get pregnant, which means you need a buck — or at least his semen. What are the pros and cons of having a buck or two — or zero?

The question of bucks

Some people don’t want to have a buck at all. They’ve heard that they’re stinky and mean. While I won’t argue about the stink, they are not necessarily mean. We’ve had about a dozen different Nigerian dwarf bucks and one LaMancha buck over the years, and we have never had one that attacked a person.

In fact, in 19 years of goat ownership and hearing stories from thousands of goat owners across the Internet, the only bucks I’ve heard of who that hit people were those who were played with inappropriately as kids. Some people think it’s fun to butt heads with a baby goat. Well, it’s not so cute when that kid grows up to weigh 80 or 200 pounds!

You should also not scratch the top of their head. Otherwise, they’ll think you’re their scratching post and will want to rub their head on you, which is not fun when they’re big and stinky.

Bucks do tend to fight with each other, but usually just during breeding season, which is traditionally in the fall. And I never say that anything is impossible, but they almost never get hurt when they are butting heads with each other.

As for the stink — the odor is worst in the fall, which is breeding season. The bigger bucks are and the more you have, the more you’ll notice the odor. Our buck pen was noticeably stinkier when we had nine bucks. (Don’t ask.) If you only have a couple of bucks and they’re kept outside with a three-sided shelter, you won’t be able to smell them from too far away, even when you’re downwind.

Touching them is where you really notice the stink. But we know this, so if we need to do anything with bucks, such as trim hooves or do FAMACHA and body condition checks, we make sure we do it at the end of the day when we’re heading inside to shower anyway.

Bucks are herd animals too, which means they can’t be alone. Bucks cannot run with does year-round because they’ll make them stinky and drive them crazy. Just because a doe is not in heat does not mean a buck won’t try to get her attention. If you’re milking your does, trust me on this — you do NOT want to have a buck in the same pasture where he can rub on the does. (I have no idea why some of them want to rub their head on a doe’s udder.)

Whenever we breed a doe, she is always the last one to get milked that day, and her milk goes to the pigs or chickens. It is nasty! (Unless you like milk that tastes like you’re licking a buck.) You don’t have to buy two bucks though, if that’s outside your budget.

A buck and a wether

Many people start with a buck and a wether (castrated male) as a companion. It’s actually not a bad idea to have a wether in your herd. Once you have more than one buck, you can put the wether with your does, and since he doesn’t know that he’s not a “real” buck, he’ll let you know when the does are in heat. Because he doesn’t have the hormones of a real buck, he won’t be stinky, and he won’t bother the does unless they are really in heat.

We had a couple of wethers in our herd for the first seven years we had goats, and they served as excellent “heat detectors.” If they are mounting a doe, and she’s standing there, that means she is in “standing heat.”

Why start with two bucks?

On the other hand, if you’re planning to keep some of your doe kids, you will have to buy a second buck to breed her, if you want to avoid breeding her to her father. This is why a lot of people will start with two unrelated bucks. If you can afford to buy two bucks when you get started, it will save you money in the long run. A wether costs as much to feed as a buck, and he can’t reproduce.

Should you lease a buck or pay for buck service?

Although it is possible to lease a buck and bring him to your farm or to take your doe to a buck when she’s in heat, that is not a popular choice. Not many breeders offer buck service because of bio-security concerns. If you have a disease-free herd, it’s risky to let an unknown goat breed your goats.

Doing “driveway breedings” can also be really inconvenient. If your doe is in heat, you have to drop everything, call the buck’s owner, then put your doe in your car and drive over to the buck’s farm. Breeding a few times will take about half an hour, then you put the doe back in your car and head home, hoping she’s pregnant.

Getting the timing right for driveway breedings can also be tough for new people. Does are only in heat for 24 to 48 hours about every 21 days or so. And she is only in “standing heat” for a few hours of that.

So, she might be screaming her head off and flagging and butting heads with the other does, but after driving her over to the buck’s farm, you might discover that she’s not in standing heat. Maybe she will be in a few hours? May she was in standing heat a few hours ago before you noticed? It will do you no good to hold the doe and let the buck breed her while she’s screaming and trying to get away. She probably won’t get pregnant.

If she comes back into heat, you have to repeat the whole process. You can see why most people wind up buying their own bucks.

What about artificial insemination in goats?

That’s another possibility, but also not very popular. Although semen costs a lot less than a buck, you have to have a storage tank, which starts at several hundred dollars, and you have to keep it charged, so the semen stays frozen.

Some statistics for AI show that pregnancy rates can be almost half of what they are with a live buck. This is probably due to humans’ misreading the signs of heat and inseminating at the wrong time. Since a doe won’t normally let a buck mount her unless she is fertile, chances of pregnancy are much better with a real buck.

To compensate for this, some people will give does hormone injections to cause them to cycle. And that opens up a whole different conversation for another day. Through the years I’ve only heard of a couple of people who used AI rather than owning a buck. In most cases, AI is used by people who already own bucks but simply want to bring a few new genetics into their herd.

Remember, I said you need a buck if you want your does to produce milk or have kids for meat. If you are not breeding goats, you do not need a buck. If you only want a few goats as brush eaters, pasture ornaments, or pets, your best option would be a few wethers (castrated bucks).

How long do bucks live? Check it out on this post.

For more information on goat breeding 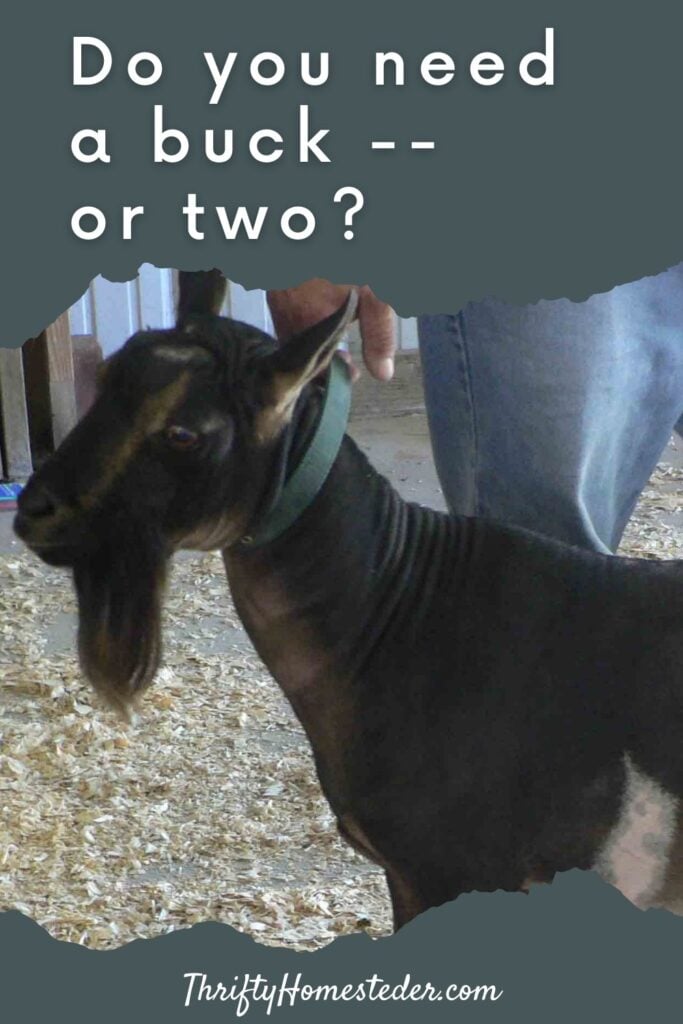 Thrifty Homesteader is a participant in the Amazon Services LLC Associates Program, an affiliate advertising program designed to provide a means for sites to earn advertising fees by advertising and linking to amazon.com. You pay the same price when you purchase through affiliate links as you would if you went directly to Amazon, and our site earns a small commission, so by shopping through our links, you are helping to support our blog so that we can continue to provide you with free content.
412 shares
412 shares