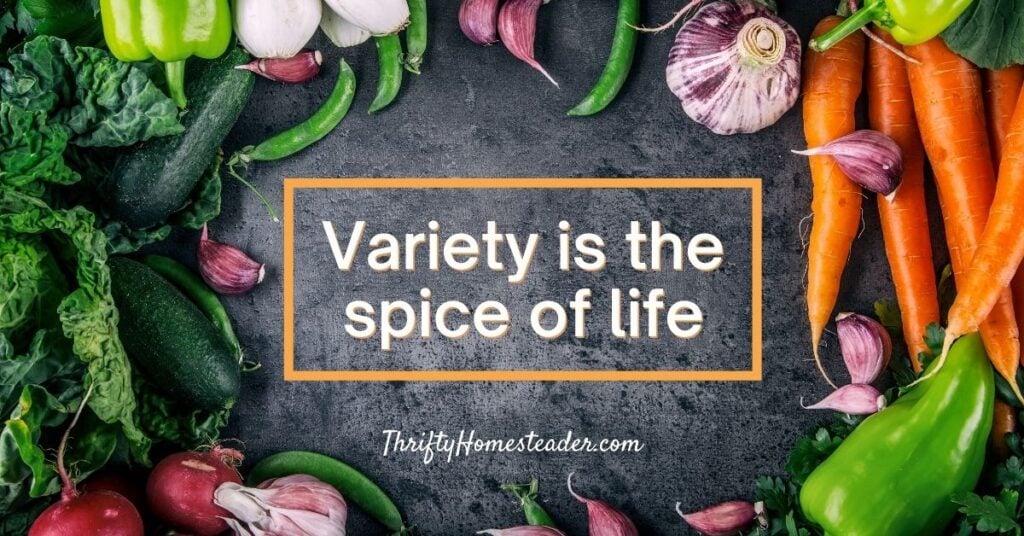 After my first book was published, I was being interviewed on a radio talk show, and the host asked me if we ever get bored with our food. You know, since we grow almost all of our own, we must get bored eating the same thing all the time, right? Uh, no. Not even close!

The simple fact is that we have far more variety in our diet than most people, and we are able to eat lots of foods that are too expensive or are simply not available to buy, such as purple jalapeños and red okra.

In addition to our own beef, pork, lamb, chicken, turkey, and the occasional goose, we also grow dozens of different vegetables that most Americans have never seen.

While many people don’t even know that there are any tomatoes out there beyond the supermarket red tomato and grape or cherry tomatoes, which are both red, we usually grow six or seven different types of tomatoes — Amana orange, yellow brandywine, green zebra, and cherokee purple, just to name a few. The red tomato is actually my least favorite, although some varieties are more tasty than others.

We make yellow, orange, white, green, and brownish-purple tomato soup. We use striped Roman tomatoes to make all of our own pizza sauce, which is more tomatoey than anything I’ve tasted anywhere. Green zebra tomatoes make a delicious quiche and a tomato-mozzarella-basil sandwich that is out of this world. And there are hundreds more varieties of tomatoes from which to choose!

We grow a dozen different types of lettuce and salad greens that all have their own unique flavor and appearance, such as lolla rossa, oak leaf, florellenschluss, deer tongue, red iceberg, and more.

Salad greens beyond the lettuce family include arugula and mache. And then there are red mustard greens, collards, Swiss chard, and spinach for cooking.

By using low tunnels to grow through the winter, we are able to produce all of our own greens from September through June.

While most people are only familiar with zucchini and yellow crookneck squash, we also have lemon squash, golden zucchini, and patty pan, which is my favorite summer squash.

In the winter squash family, we have acorns, butternut, blue hubbard, sweet potato squash, and my favorite, spaghetti squash.

Convinced yet? I could go on. We plant more than 100 different varieties of vegetables, and our garden is only one-seventh of an acre, which is half the size of most suburban lots.

In addition to the vegetables, we have fruit trees and bramble fruits. In their first year of production each pear tree averaged more than 25 pounds of fruit — that was only three years after we planted them.

In addition to eating pears fresh, we put them on salads and in desserts, and we canned them. We had plain canned pears and spiced pear butter, which is really tasty in oatmeal. With our apples, we canned plain apples, as well as caramel apple butter, applesauce, and apple preserves.

And then there is the maple syrup. Most people can only afford to use it on pancakes, waffles, and French toast, but we use it as the sweetener in a number of recipes, such as ginger cookies, granola, and pork roast.

We just finished maple sugaring for this spring, and we have four and a half gallons. Sounds like a lot, but we’ll use most of that before next spring arrives. We were able to make five gallons last year, and we’ve almost finished it.

With the addition of bee hives on the farm, we are looking at almost completely eliminating the purchase of commercial sugar, which is often made from genetically-modified sugar beets.

Berries also tend to be too expensive for most people to use in abundance. Through the summer we eat a lot of berry crisps and cobblers, and we drink a lot of smoothies. I make a raspberry crisp that uses six cups of raspberries, which would cost about $20 from the grocery store — and my berries are organic. We also freeze berries for using through the winter.

Speaking of smoothies, we make our own yogurt, as well as buttermilk and a multitude of cheeses from the common to the obscure. In addition to cheddar and mozzarella and the cheeses that everyone has heard of, we also make some that were totally new to use before we started making cheese, such as gjetost, an incredibly rich Scandinavian brown cheese made from whey.

As I said in Homegrown & Handmade, variety is one reason we grow our own food. So, if you’ve been thinking that you don’t want to give up something that you’re currently buying, think about it a little more. Maybe you don’t really have to give it up. If it’s one of those processed foods that isn’t good for you, odds are good that you can replace it with something homegrown and handmade that tastes even better, costs less, and is good for you!

Can you tell the difference between edible and poisonous berries?

Celebrating summertime with the best varieties of tomatoes

Planning the Sustainable Garden: What Will You Grow? 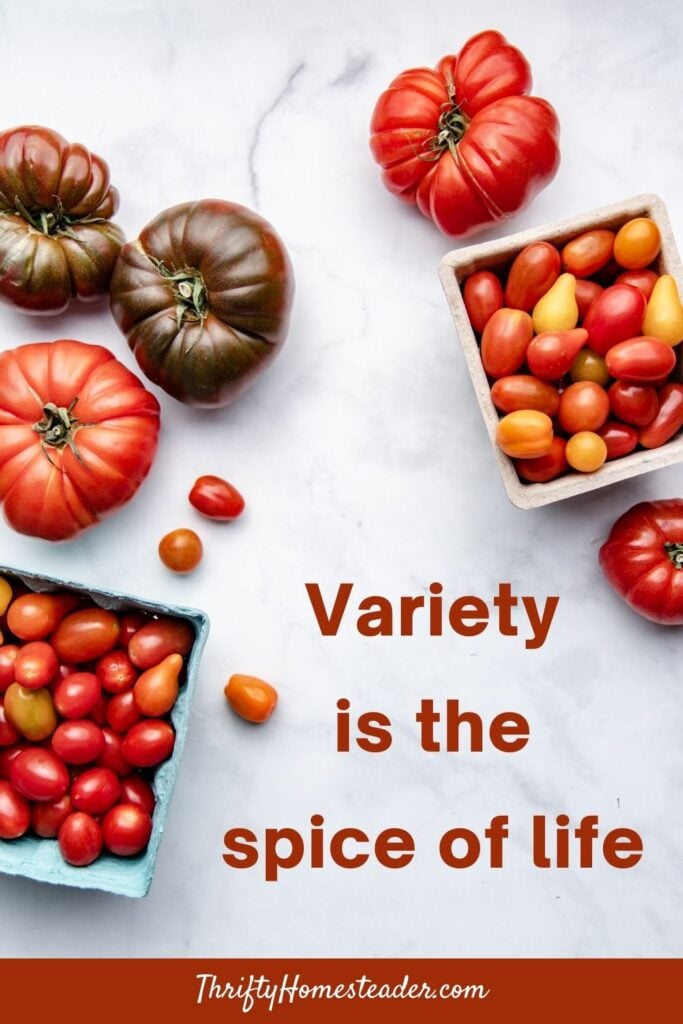 9 thoughts on “Variety is the spice of life”

Thrifty Homesteader is a participant in the Amazon Services LLC Associates Program, an affiliate advertising program designed to provide a means for sites to earn advertising fees by advertising and linking to amazon.com. You pay the same price when you purchase through affiliate links as you would if you went directly to Amazon, and our site earns a small commission, so by shopping through our links, you are helping to support our blog so that we can continue to provide you with free content.
77 shares
77 shares