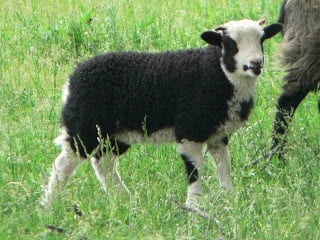 We became vegetarians in February 1989 when our first child was a toddler. Up until that point, I assumed (like most Americans) that meat came from animals who had spent happy lives wandering around in grassy pastures. But then I read an article about factory farmed chickens, and I wanted nothing to do with that industry. I began reading about eating a vegetarian diet and learned that in most cases, vegetarians are actually healthier than carnivores in our society, so we stopped eating meat and raised all three of our children as vegetarians.

When we moved to the country in 2002, we had no plans to start eating meat. We had chickens for eggs, goats for milk, cows for milk, and sheep for wool. If you’ve read Homegrown & Handmade, you know what happened. When you breed animals, you wind up with fifty percent males, and they don’t lay eggs or make milk, and eventually you have some challenges. Intact males have a lot of testosterone running through their bodies. The roosters started killing each other, and it didn’t matter how much space they had for roaming. If two roosters wanted a hen, it got ugly. We had become vegetarians for ethical reasons, but it didn’t seem very ethical to let the roosters just kill each other, and the only real alternative was to lock them up in separate cages, which didn’t seem very nice either.

We also realized we had more sheep than our pasture could handle. When we got started, I naively thought that we simply needed to be able to feed the animals, but it’s a little more complicated than that. It is impossible for animals to have zero internal parasites when they are eating off the ground. However, they can usually tolerate a few worms in their body. Unfortunately, if they don’t have enough pasture space, they will be constantly re-ingesting parasite eggs and larvae, and eventually it could kill them. And overusing drugs for parasite control has the same ultimate outcome as using antibiotics frequently — you wind up with drug-resistance.

I know this somewhat contradicts my last post on dairy animals because I did say in there that as long as you can feed them, you can keep your older, retired animals. This is one of the short-comings of blogging. You don’t always think of everything before something is posted! So, yes, in addition to feeding, you also need to make sure you have enough pasture space for the goats or cows. And although it appears that I might be playing favorites by butchering lambs but not butchering goats, I’m really not. There is a good market for pet goats, but almost no one wants pet lambs because of the annual shearing. I sold three lambs to a woman once as pets, and when I talked to her a little more than a year later, I learned that she had sold them because she didn’t want to deal with shearing.

But I digress! Back to the meat discussion — When I pulled out my dusty old books on vegetarianism, I realized that almost all of the problems with meat are with factory farmed animals. If animals are raised on pasture and fed a natural diet, it eliminates all of the problems with pollution, and the meat is actually healthier for you, being high in the good omega fatty acids and even lower in cholesterol.

Keeping animals in a healthy environment means they are not living in crowded conditions, and as the number of our hens and sheep increased, we realized our extra males had to go somewhere. When no one bought them, there seemed to be only one logical solution.

People who’d known me for years were surprised to learn that we were butchering some of our animals. “You’re eating meat?” was the question, and I was always quick to say, “No, I’m not eating commercially produced meat. I’m only eating the meat that we raise.” This often raised eyebrows.

“How can you eat an animal that you know?” was the next question.

My unspoken response is — how can I eat an animal that I never knew? And I have only said it once or twice, but I’m always thinking, “How can you eat an animal that spent its life in filthy, unnatural, unhealthy conditions, being fed antibiotics, hormones, and other drugs on a daily basis to keep it alive?”

One of the reasons I wanted to move to the country was because I wanted to live a real life, an honest life. I wanted to know where my food came from — and I only started eating meat because I knew that the animals lived a happy, healthy life. If you eat meat, you have to know that you are eating a dead animal. Maybe the reason that some people don’t want to think about that fact is because then they would have to think about how the animal spent its life. And then they might not want to eat that fast food burger or the things they call chicken nuggets.

I have not eaten commercially-raised meat in 23 years and considering what I’ve learned in the past ten years, I definitely will not start eating it. I feel more strongly now than ever that raising animals in feedlots and big buildings is just plain wrong for the animals, the planet, and the health of the humans who ultimately eat the meat.