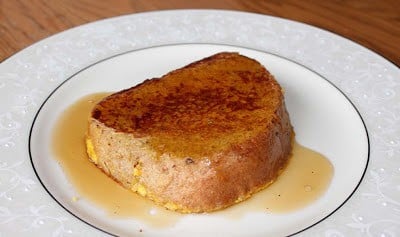 Although a lot of people relegate French toast to weekends, it really does not take much time to fix and could easily be incorporated into your weekday’s breakfasts. To save time, you can do most of the prep the night before. 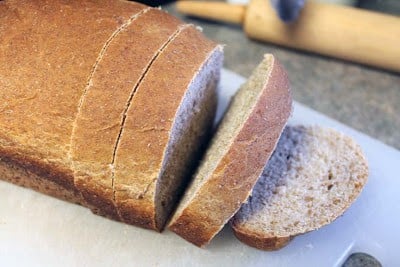 Slice homemade bread into pieces one inch thick. You’ll want to use a good hearty bread that will hold up to the soaking. In fact, this is a perfect use for bread that is a couple days old and has gotten rather dry and stale.

To make six slices of French toast, mix up 3 eggs, 1/2 cup milk, and 1 tablespoon vanilla in a flat-bottomed dish. I like to use a baking pan. In case you’re wondering why the egg mixture is so yellow in my pictures, it’s because they’re from our pastured hens. Eggs from free-range chickens have much higher levels of beta carotene than eggs from confined chickens. 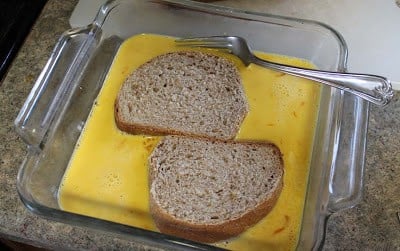 Dip the bread in the mixture. Flip the bread over after it’s been soaking for 30 seconds or so. 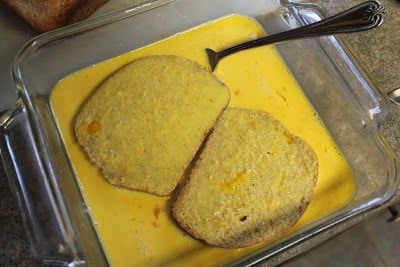 Let it soak on the other side for a couple minutes to absorb more of the mixture. If you pull it out too soon, you won’t get that custardy texture inside.

Place in a skillet on medium heat. I like to butter the skillet for the added buttery flavor. 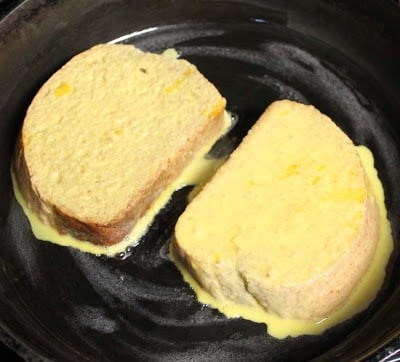 Turn the toast when you see the edges browning, which will take a couple minutes. 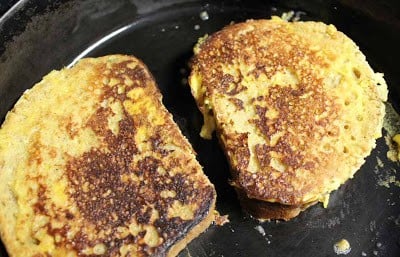 When the second side is browned … serve! 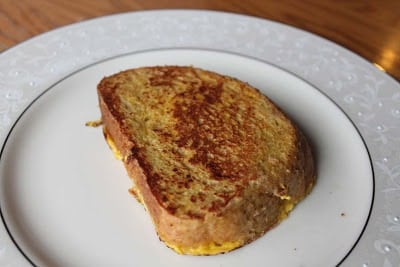 Another time saving tip — To soak the bread, use a baking pan that will hold all six slices of bread. Place the bread in the pan, then flip it over, and you can go shower or do something else while the bread soaks up all of the egg mixture. Then cook them all at once on a griddle that will hold all six slices. If you don’t have a family large enough to eat this much for breakfast, store left-overs in the refrigerator and reheat in a toaster oven for breakfast tomorrow or the day after.

Thrifty Homesteader is a participant in the Amazon Services LLC Associates Program, an affiliate advertising program designed to provide a means for sites to earn advertising fees by advertising and linking to amazon.com. You pay the same price when you purchase through affiliate links as you would if you went directly to Amazon, and our site earns a small commission, so by shopping through our links, you are helping to support our blog so that we can continue to provide you with free content.
14 shares
14 shares