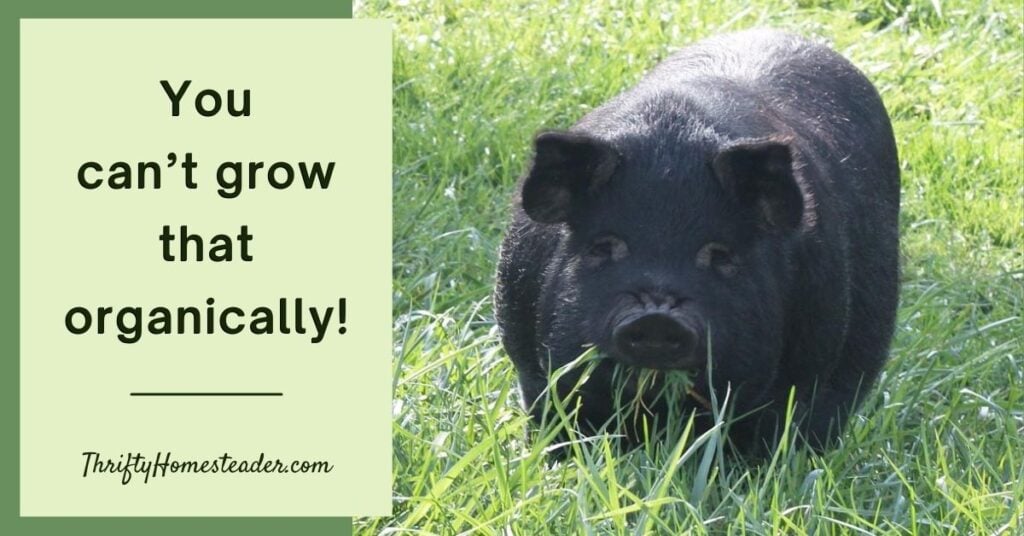 It is always a bit of a shock when someone asks me if something — apples, pigs, turkeys, you-name-it — can be grown organically. I’ve heard the questions so many times over the years that it really should not be a surprise to me, but optimist that I am, I always think that I will never hear the question again. Why?

Today, there are some genetically-modifed organisms (GMOs) that cannot be grown organically, but that is because they were created so that they would require the additional inputs that can only be purchased from the seed developer. It is a great idea for growing a crop science company. It is a terrible idea for sustainable agriculture because it is quite simply unsustainable. Buying seeds and soil amendments year after year is the opposite of sustainable.

One reason I like having a diversified farm with both crops and animals is because they feed each other. The animals produce manure to feed the plants, the plants feed the animals and us, and dead plants become compost to feed new plants.

What does organic farming mean?

Most people think that it simply means growing plants and animals without chemical inputs, whether that be chemical fertilizers, pesticides, herbicides, fungicides, etc. That was me a few decades ago, and my first garden yielded a handful of very stringy green beans that were inedible. That’s also how I tried to raise my first goats, and I wound up with far too many dead goats. I still get emails from people today who are trying to do that.

Organic and natural is NOT about letting nature do its thing. If you try that, you will soon learn that death is a big part of nature.

What vegetables and fruit can you grow organically?

All fruits and vegetables can be grown organically. Apples are one fruit that people often think can’t be grown organically, but you can find plenty of organic apples in the grocery store, so obviously that’s not true. If you are going to be a commercial apple grower, you will need to use some management and perhaps some natural pest control strategies to get as many perfect looking apples as possible.

But if you are only growing for your family, apple trees will produce more than enough apples for you and the bugs. (You need at least two apple trees for pollination.) Just cut off the parts that have been damaged by bugs and feed those to your pigs. In fact, every year we wind up feeding buckets and buckets of apples to our pigs because we can’t possibly eat all of them. So, why would I want to spend time trying to make all of the apples as perfect as possible? Sometimes growing your own food organically just means creating realistic expectations. I don’t need hundreds of pounds of perfect apples, so it’s not a big deal if half of every apple has bug damage. We still can’t eat all of the apples!

Squash is one that I thought I couldn’t grow in the early years. But then I realized it was just a matter of management. If you have a problem with squash bugs or borers, just don’t plant them in the same place every year. Now we plant squash in a different garden space every year. You could also skip every other year growing squash if you don’t have a yard large enough to change the location of the squash plants each year.

So, if someone tells you that you can’t grow a certain fruit or vegetable organically, that simply means that they don’t know how to do it. You just need to keep researching until you figure it out! Remember, you haven’t failed until you quit trying.

What livestock can you raise organically?

Being sustainable means you raise hardy, heritage breeds of livestock, which can all be raised organically. One reason I stay away from modern, so-called “improved” breeds is because they have been bred to do best in confinement. I buy heritage chickens for eggs rather than industrial leghorn chickens because the “improved” egg layers can’t handle temperatures much hotter than about 90 degrees before they start dropping dead. We have never lost a chicken to hot weather, and we don’t do anything special for them.

In an organic system, the animals are on pasture, so that they can live as nature intended, and you are not scrambling to fix problems created by confinement. For example, back in 2003 when I was looking for our first feeder pigs, I naively thought it would be easy enough to find some that had been raised organically. I was wrong. I came across a number of pig farmers who insisted that you couldn’t raise pigs organically. Of course, they were raising their pigs in confinement. Those pigs never saw the light of day in their entire lives! They never had the opportunity to root in the dirt. And they lived with the worst air quality because they are basically trapped in a sewer.

One farmer told me that he only gave his pigs medications and vaccines that they really needed. If he didn’t give them one particular vaccine, they would all have bloody noses. It never occurred to him that it was caused by poor air quality, and that if my pigs were going to be outside, that would not be a problem for them.

In 18 years of raising swine, I never had a pig with a bloody nose — not even one! — yet that confinement farmer said in all earnest that EVERY pig would have a bloody nose if he didn’t use one particular vaccine. And I’m sure he’s right. In Barry Estabrook’s book, Pig Tales, he explores in depth the differences between confinement and pasture-based pig operations in the U.S. and in Europe.

Several years ago, one of the ag organizations in Illinois created a disinformation campaign where they recruited moms to visit confinement farms so they could show them how they were humane and only doing what was right for the animals. I read a blog post written by one of those women who was totally convinced that pigs could not live outdoors in Illinois in the winter! Seriously?! We’ve had piglets running through the snow when they’re a couple months old.

Can goats be raised organically?

If you’ve followed me for very long, you know that goats can be … challenging. Quite simply, this is because there are very few places in North America where goats are in their natural environment. They are browsers, and how many of us have acres of bushes and trees for them to eat? Not me!

Most of us are trying to turn our goats into grazers. Not only does grass not have as many minerals as bushes and trees, grass is also a great vector for worm larvae transmission. Goats poop on the grass; the eggs hatch; larvae wind up on the grass; goats eat the grass and the larvae. And if they do that over and over every day, they will wind up with a parasite problem in short order.

So, even though goats are more challenging, it is still possible to raise most of them organically if you practice pasture rotation so that they are not eating from their toilet every day. Most of the goats on our farm today have never had any drugs in their entire lives.

And the second part of that equation is to provide an excellent goat-specific mineral, NOT a “sheep and goat” mineral, which would lead to copper deficiency in the goats because sheep don’t need much copper. It’s really not a big deal if your cows or sheep run out of minerals because they are naturally grazers, and they can get most of what they need from grass. However, goats absolutely must have a high quality goat mineral to thrive, regardless of whether or not you want to do things organically. As one holistic vet said to me one time, “a lot of farmers go broke successfully treating sick animals.”

Why can’t some animals be raised organically?

By now, you should know the answer is management. Anyone who claims they have to feed antibiotics to animals in their daily rations has a management problem — and if they fixed the management problem, the animals would be healthy.

If Big Ag wants to claim that raising food organically isn’t profitable enough for them, I can’t argue. Although I do know plenty of organic farmers who make a good living, they don’t live in million-dollar mansions like Big Ag executives. But if anyone tells me that it is impossible to raise food organically … well, they’re just plain wrong. Either they don’t know how to do it, or they don’t want to do it. 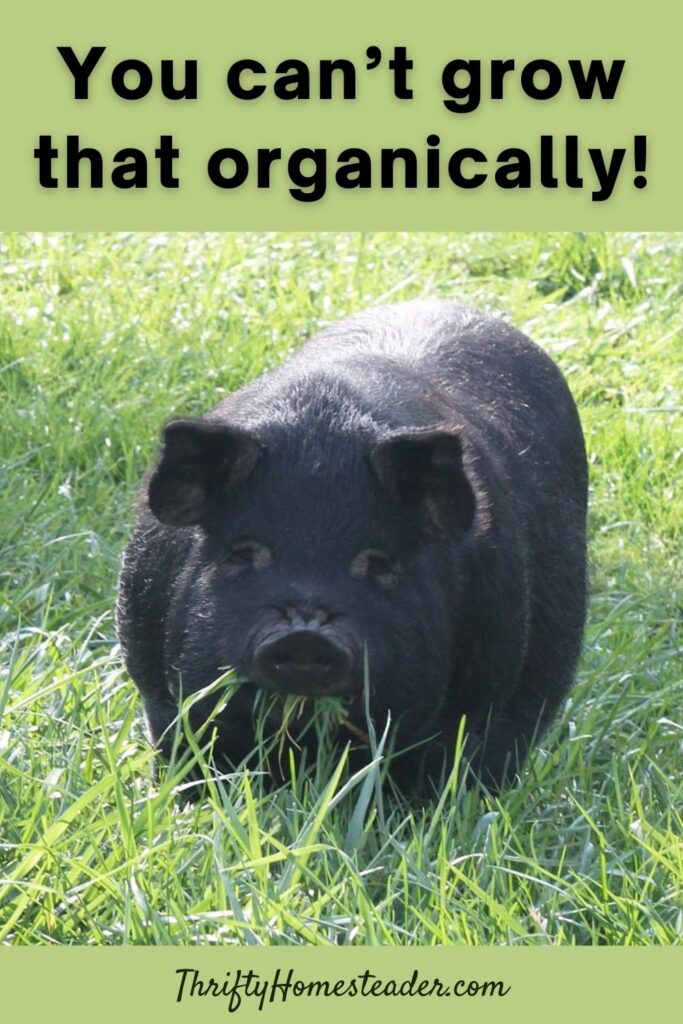 3 thoughts on “You can’t grow that organically!”

Thrifty Homesteader is a participant in the Amazon Services LLC Associates Program, an affiliate advertising program designed to provide a means for sites to earn advertising fees by advertising and linking to amazon.com. You pay the same price when you purchase through affiliate links as you would if you went directly to Amazon, and our site earns a small commission, so by shopping through our links, you are helping to support our blog so that we can continue to provide you with free content.
372 shares
372 shares