Many people are concerned about genetically-modified organisms (GMOs) in our food supply, and most people want GMO foods labeled. You’ve been unknowingly eating GMOs since the 1990s when the first genetically-modified tomato hit supermarkets. Today, about 90 percent of the corn and soybean in this country is GM, which means almost everyone is eating GMOs every day. Corn syrup, corn starch, corn and soybean oil (vegetable oil), soy lecithin, natural flavors, citric acid, and more than a hundred other non-nutritive food additives are made from corn and soy. They’re in everything from breakfast cereal, ketchup, canned soups, and candy to vitamin C tablets. 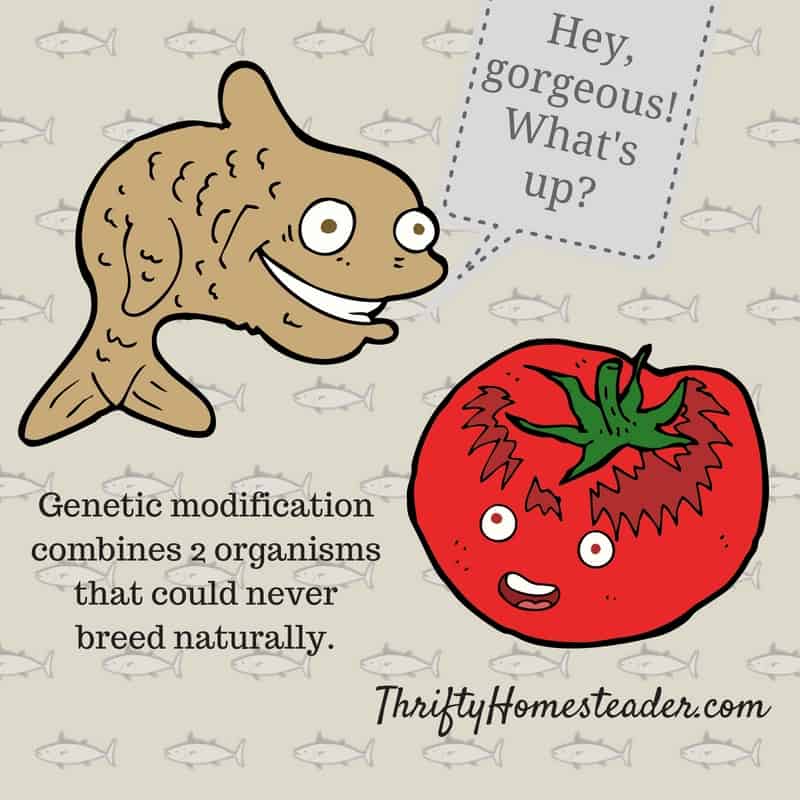 The companies that create GMOs say that they are no different than foods that were created through selective breeding, which people have been doing for thousands of years. But there is a big difference. In selective breeding, you are making the decision to breed one chicken to another chicken or one tomato to another tomato. In genetic modification, they are crossing two things that could never be crossed in real life. Have you ever seen a fish have sex with a tomato? How about a goat and a spider? No? Me neither. And the scientists are not coming up with some clever way to make that tomato look sexy to a fish. They’re pulling out the bit of DNA they want, and they’re inserting it into the other species. This is not something a farmer can do. In case you’re wondering, the goal of those crossings was to create a tomato that would be frost resistant and to create a goat that would have spider silk in its milk, which could be used to make lightweight body armor for the military.

As I mentioned in my first book, Homegrown and Handmade, the most obvious problem with this is for people with allergies. If you are allergic to fish, and you eat a tomato that has fish DNA in it, you could have an allergic reaction to the tomato and have no idea why. So, does that mean people without allergies can safely consume GMOs?

Are GMOs really safe to eat?

When the US government approved GMO foods, they had simply looked at nutritional analysis. Did the GMOs have the same amount of protein, calories, and nutrients as their naturally reproducing cousins? No studies were done to see what would happen if those foods were fed to animals or humans long term. That means that US consumers became the unknowing guinea pigs for this massive experiment. Keep in mind that the 1948 Nobel prize in medicine went to the man who invented DDT, which was hailed as a way to eradicate malaria (because they thought you just needed to kill all the mosquitoes in the world). Not even 20 years later, they realized it was a carcinogen, and it was ultimately banned in the US in 1972.

It’s not just the GM food that can cause the problem. In the case of corn and soy, most of it has been genetically modified so that it can survive being sprayed with the weed killer glyphosate (Round-Up). Yes, that means that when you consume GM corn and soy, you could be consuming trace amounts of glyphosate. Just how much glyphosate is safe for a person to consume? No one knows. Glyphosate has been classified as “probably carcinogenic,” according to Lancet Oncology, which cited multiple studies that showed a connection between glyphosate and different types of cancer in humans and lab animals. And glyphosate is not used alone. It is an ingredient in 750 different products, which all have unique ingredients, many of which are even more toxic than the glyphosate itself.

A recent study further showed that when glyphosate is sprayed on GM corn, it actually changes the plants themselves, including their proteins. (When people have food allergies, they are usually reacting to the plant protein.) For all the details, check out the very thorough scientific study. You can also check out EcoWatch’s article about the study, which says,

Polyamines found to be present in increased amounts in GMO NK603 corn include putrescine and cadaverine, which can produce various toxic effects. For example, they enhance the effects of histamine, thus heightening allergic reactions and both have been implicated in the formation of carcinogenic substances called nitrosamines.

It’s been almost two years since I discovered that eating corn and corn products (corn syrup, corn starch, etc) caused me to suffer terrible stomach pain and constipation that lasted for days. Last year, I was at a conference, and one of the vendors was giving away samples of an organic heirloom purple corn cereal. I decided to give it a try, and I was thrilled when I had no reaction to it at all. I have since eaten organic blue corn taco shells and organic heirloom yellow corn meal and been fine. But my body continues to react painfully whenever I accidentally consume corn syrup or corn starch when eating in restaurants. Corn is unfortunately not one of the allergens that restaurants and manufacturers are required to disclose in their ingredient statements.

In The Animal Desk Reference: Essential Oils for Animals, author Melissa Shelton, DVM, talks about how she became aware of alternative medicine when her son appeared to be allergic to her breast milk. She went on a very strict elimination diet and ultimately realized that her son would react negatively whenever she consumed anything with corn derivatives in it. Stories like this are becoming more and more common.

But that’s not all. There is a correlation between glyphosate use and the rise of autism. “Other disease incidences with high correlations include hypertension, stroke, diabetes, obesity, lipoprotein metabolism disorder, Alzheimer’s, senile dementia, Parkinson’s, multiple sclerosis, inflammatory bowel disease, intestinal infections, end stage renal disease, acute kidney failure, cancers of the thyroid, liver, bladder, pancreas, kidney, and myeloid leukemia,” according to Great Plains Laboratory, which has a test that can tell you how much glyphosate you have in your urine.

What can you do?

Neurologist and author David Perlmutter, MD, says, “GMO foods threaten human health,” and strongly advises his readers to eat organic as much as possible. This is yet another reason to have your own garden and cook from scratch. You can plant heirloom seeds and avoid pesticides and herbicides. And when you cook from scratch, you can control your ingredients. And since no one can grow everything themselves, it’s helpful to find a few local farmers whom you can trust.

2 thoughts on “Are GMOs really safe?”

Thrifty Homesteader is a participant in the Amazon Services LLC Associates Program, an affiliate advertising program designed to provide a means for sites to earn advertising fees by advertising and linking to amazon.com. You pay the same price when you purchase through affiliate links as you would if you went directly to Amazon, and our site earns a small commission, so by shopping through our links, you are helping to support our blog so that we can continue to provide you with free content.
43 shares
43 shares