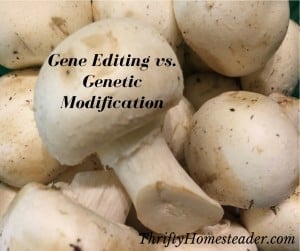 In recent years, consumers, food producers, policy makers, and other advocates have become more aware of the harms of genetically modified organisms (GMOs), and calls for GMO labeling have become widespread. A technology which I believe is lesser known, but which also could have devastating consequences for food production, is “gene editing.” Though I had heard the term before, I really didn’t understand how gene editing and genetic modification differ, so I decided to investigate this topic further.

A simple distinction between gene editing and genetic modification is that gene editing involves removing genes while genetic modification involves adding genes from a different living being.1 The Food and Drug Law Institute (FDLI) provides a very thorough explanation in their July/August 2016 magazine article “Ready or Not, CRISPR and Gene Editing Have Arrived and Are Here to Stay.”2

So far, gene editing has primarily focused on editing the genome of animals (for example, zebrafish or pigs) to study and develop human treatments and medications (such as for kidney diseases, organ transplants, Zika and Dengue viruses, and breast cancer). While these hopeful outcomes may be undertaken with the best of intentions (and may have significant positive health impacts), we should be wary of how these technologies may delve into other areas such as food production. Specifically, gene editing is already being used to improve livestock health and disease resistance or select for higher-value qualities in plants or animals (such as cows without horns).2 Though the public may generally agree that these are desirable qualities, potential gene-editing of crops or animals could be less desirable or healthy. According to the FDLI, “the only limit to what edits can be made to which organism is the imagination of the scientist designing the experiment. The potential applications, then, are similarly limitless.” 2

While food industry leaders want to distinguish gene-edited crops from genetically-modified crops in the minds of consumers, watchdog organizations such as The Cornucopia Institute argue that gene-edited crops should be just as closely regulated. Currently, gene edited crops are not being regulated by United States Department of Agriculture.1 For example, the USDA decided not to regulate gene-edited white button mushrooms, which were edited to delay them from turning brown.3 And it is optional, not mandatory for gene-edited crops to be submitted for review to the Food and Drug Administration (FDA).4

Do you know what you’re eating?

As Deborah discussed in her recent post about olive oil fraud and adulteration, unfortunately we can’t always be sure of what exactly we are eating unless you raise an animal or grow a crop yourself. Now this applies to gene-edited foods as well, without adequate regulation by the USDA and FDA or proper labeling (which also is not currently required).

As a consumer, I’d like to know how the food I’m eating was created and be aware of its potential health consequences. Given the present regulatory environment (or lack thereof) surrounding gene-editing of crops and livestock, I consider this one more reason to work towards growing and raising my own food. At this point, we don’t know all of the possible unintended consequences of gene-editing. But if you’re growing your own food, this is one worry you can check off your list!

Thrifty Homesteader is a participant in the Amazon Services LLC Associates Program, an affiliate advertising program designed to provide a means for sites to earn advertising fees by advertising and linking to amazon.com. You pay the same price when you purchase through affiliate links as you would if you went directly to Amazon, and our site earns a small commission, so by shopping through our links, you are helping to support our blog so that we can continue to provide you with free content.
56 shares
56 shares