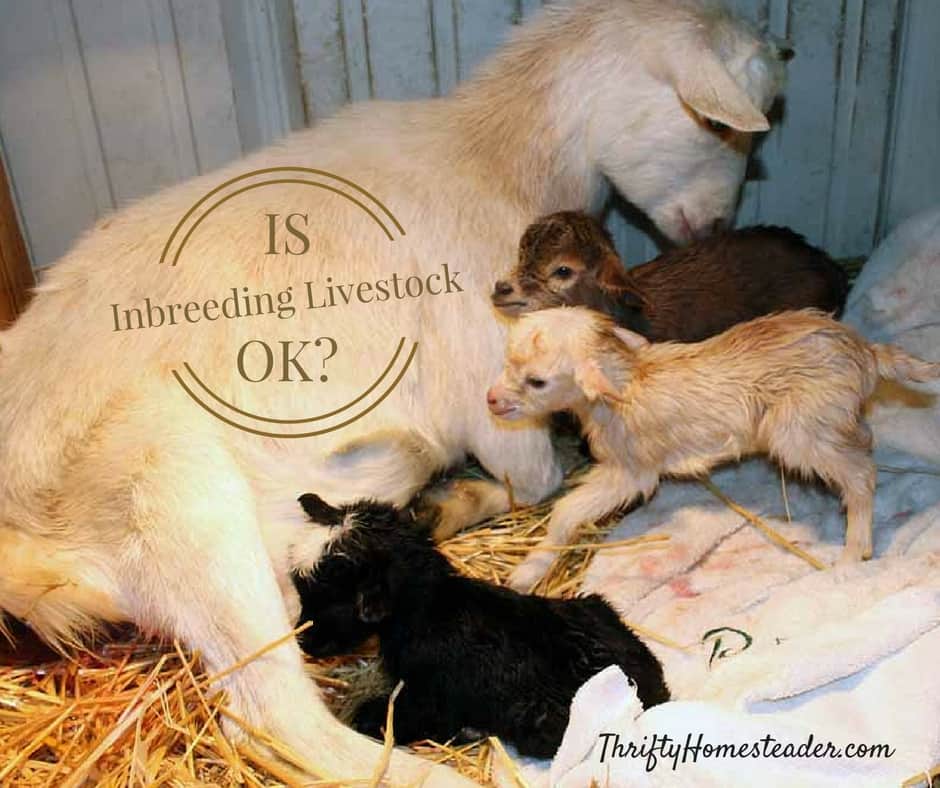 When people are new to owning livestock, they usually don’t want to have too many males. When I’m asked a question like, “Can I breed a buck (or ram or boar or whatever) to his daughter?” I usually say, you can do whatever you want, but you have to be ready to deal with the consequences.

They say inbreeding livestock produces trash or treasure. Inbreeding concentrates genes. Are you concentrating awesome genes or defective genes? For example, does a buck have a lot of genes for excellent milk production, or does he have genes for extra teats or bow legs? This is why inbreeding should not be done simply because you want to avoid buying another male animal. The first doe I ever bought was accidentally bred when her son jumped the fence. Three of her four kids had teat defects. Even though she was an excellent milker, that meant that the males were all wethered and sold as pets, and the doeling was also sold as a pet without papers.

All of your breeding decisions should be made with certain goals in mind — goals for improving your herd or flock. The only time I have purposely bred a parent to offspring was when I bred my best milker to her son. His sire had excellent milking genetics, so I was hoping to double up on that. Since the buck was already six years old, and I had never seen any disqualifying defects in any of his kids, I was not too worried about something like a teat defect, and there were none.

When inbreeding happens — whether by accident or on purpose — you have to be prepared to make a responsible decision as a breeder, if one or more offspring has some type of defect. Do you have a pet market for the animals, if they are not breeding quality? Are you willing to butcher any animals that have a defect?

Sometimes when people are breeding all animals for meat, such as in the case of pigs, they think that inbreeding is less important. After all, all offspring will be eaten. However, if you continue to inbreed generation after generation, litters will get smaller, and the size of the offspring may also get smaller. We had some accidental inbreeding with our sheep one year, and lambs grew so slowly that we could not butcher them in the fall like we usually do. That meant that we had to feed them hay through the winter, waiting for them to grow large enough to butcher. 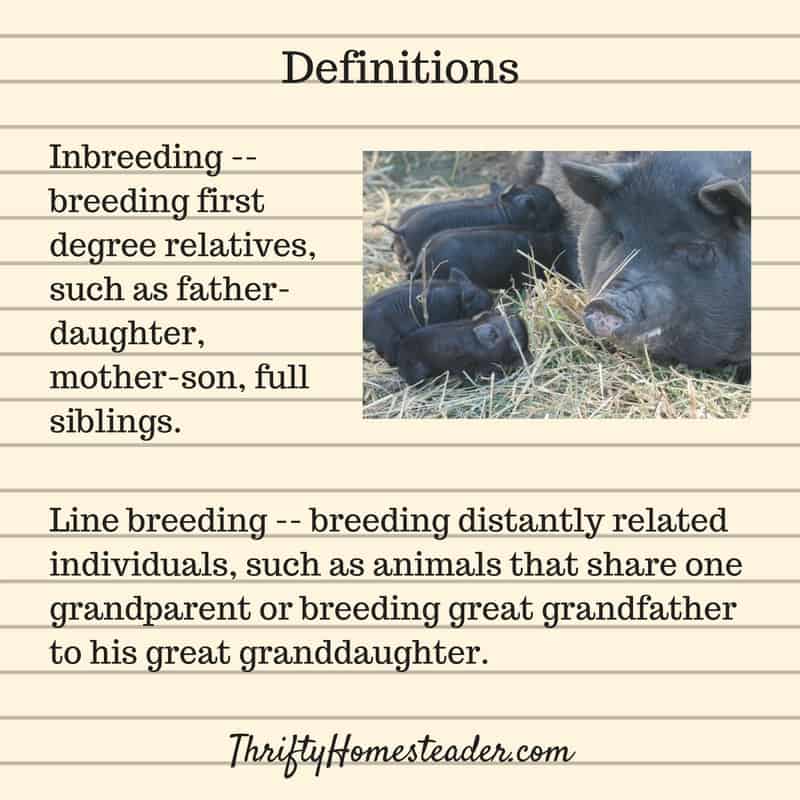 How close is too close when it comes to breeding related animals? The biggest risk of defects occurs when you are breeding first-degree relatives, such as father and daughter, mother and son, or full siblings because you are concentrating genes so much. When breeding a parent to a child, the parent’s genes will make up 75% of the offspring’s genetics. If the parent has any undesirable traits, they are more likely to come out. I know one breeder who will purposely breed a doe back to her sire whenever she buys a new buck so that she can immediately learn if he has anything undesirable in his genes. Basically, she’s trying to force out the bad genes, if they exist. If anything negative comes out, she culls the buck. Other breeders don’t want to inbreed until they’ve used an animal for several years and feel confident that there is nothing negative lurking in the goat’s DNA.

There is a joke that if the offspring are great, it’s line breeding, but if they’re bad, it’s inbreeding. (Unfortunately some people don’t realize this is a joke.) Line breeding generally means that you are breeding distantly related animals, but there isn’t any official percentage that separates line breeding and inbreeding. Most people would agree that breeding first degree relatives is inbreeding, but beyond that, it’s rather gray. The bottom line is that there are no guarantees about what type of offspring you will get when you breed two animals. Like all breeding decisions, line breeding and inbreeding should be done with specific goals in mind to improve your herd or flock, not just because you don’t want to buy another male animal.