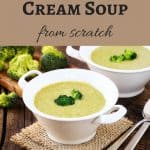 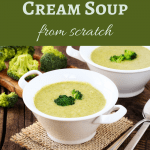 Baby, it’s cold outside, and one of the best things for warming up on a cold day is a bowl of hot soup. For many people this means grabbing a can from the pantry, but there are plenty of good reasons to make your own soup from scratch. I promise it’s not hard! All of my children knew how to make cream soups from scratch by their early teens. And it’s not time consuming. Depending upon what kind you make, it will only take 5 to 15 minutes more than heating up a can of soup.

What’s so bad about canned soup?

First of all, soup cans are lined with bisphenol-A, which is usually called BPA. It is an endocrine disruptor, which means it messes with the hormones in your body. So, if your pancreas, thyroid, or ovaries are not performing optimally, it could be because of all the BPA and other endocrine disruptors you are consuming or absorbing through your skin every day. In addition to that, canned soups also contain non-nutritive food additives that are made from GMOs, which have been associated with a long list of negative health outcomes. To top it off, there is usually very little nutrition in canned soup because of the high heat required for canning, which also destroys the fiber. And they are often high in salt, sugar, and unhealthy fats.

How to make cream soup

In culinary school, future chefs are not given a finite number of recipes to use. They are taught how to do the basics, such as a cream soup base, and then how to personalize and expand upon them. You don’t need a dozen soup recipes. Using my cream soup base, you can make a dozen different cream soups, chowders, and cheese soups. I’ve listed a few variations below the recipe, but don’t be limited by that. The only thing you need to remember is that if you add liquid, you should reduce the milk by an equal amount. For example, I once made a chili con queso soup. I added a cup of cheddar cheese and a 12 ounce jar of salsa, so I reduced the amount of milk by 12 ounces. Really, your imagination is your only limitation. 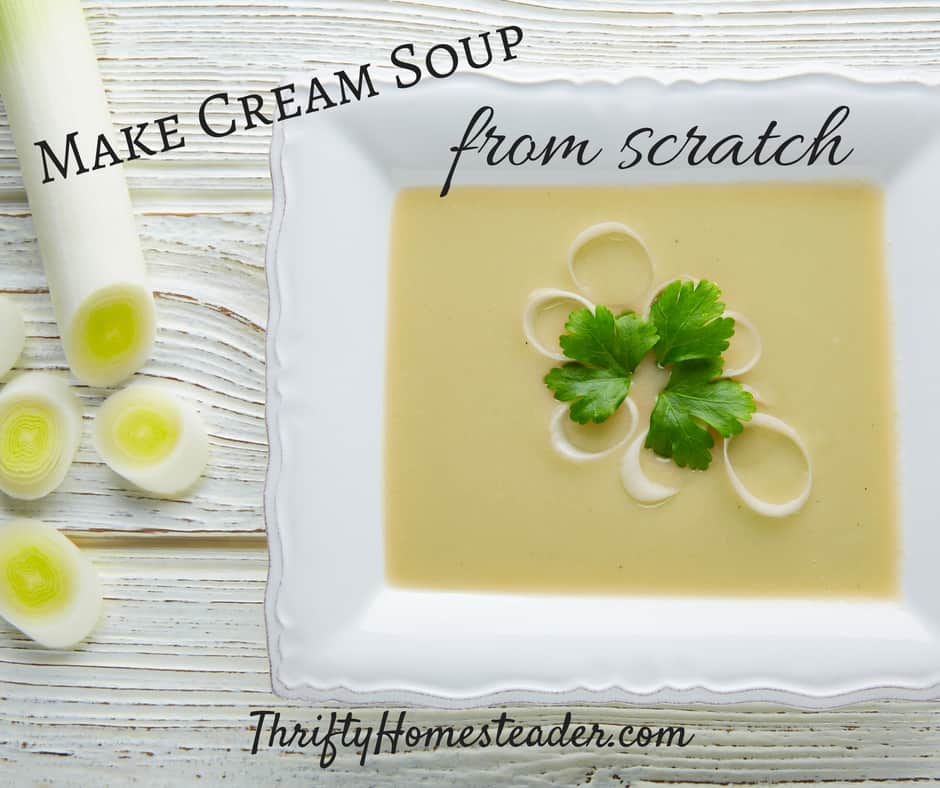 In addition to being able to make all kinds of soup, you can replace those cans of cream soups used in casseroles by making this cream soup base.
Print Recipe Pin Recipe
Course Soup
Servings 4 servings

You can turn this soup base into any of the cream soups below by adding the listed ingredients. Cream of mushroom: Add 8 ounces of sliced mushrooms, browned in 2 tablespoons of butter. A splash of leftover red wine goes especially well in mushroom soup. Cream of celery: Add 1 cup of sliced celery, steamed. Cream of broccoli: Add 4 cups chopped broccoli, steamed. Cheddar broccoli: Add 1 cup shredded cheddar while stirring constantly, then add 4 cups chopped broccoli, steamed. Cream of spinach: Add 4 cups chopped, raw spinach. Corn chowder: Add 1 pound of corn kernels, 1 red pepper, chopped, and 2 small potatoes, peeled, cubed, and browned in 2 tablespoons oil. Seafood chowder: Add 1 cup of cooked fish, scallops, chopped shrimp, or other seafood. Cream of chicken or turkey: Add 1 cup of cubed, cooked chicken or turkey, and 1 cup of cooked rice. You can add a chopped onion to any of the soups by sautéing it in the butter for a few minutes before adding the flour.

Thrifty Homesteader is a participant in the Amazon Services LLC Associates Program, an affiliate advertising program designed to provide a means for sites to earn advertising fees by advertising and linking to amazon.com. You pay the same price when you purchase through affiliate links as you would if you went directly to Amazon, and our site earns a small commission, so by shopping through our links, you are helping to support our blog so that we can continue to provide you with free content.
153 shares
153 shares