A few months ago I was giving a talk and brought up aquaponics as a good way to grow vegetables during times of drought. Aquaponics is growing fish and plants together. It could be outside or in a greenhouse or even in your basement, but the beauty of the system is that the plants take up the waste products of the fish, and the fish thrive by having the plants clean their water. It’s a great way to raise fish and plants organically. But one person in the audience made a face and said, “That’s not natural.”

She felt that because people were putting the fish and plants together, sometimes inside a building, that it was a bad idea because it was unnatural. I explained that aquaponics is mimicking the example that we see in nature, such as plants growing along a stream where fish live, but she was skeptical. I understand where she is coming from because I used to be in her shoes. I felt that humans really did not need to do anything special to grow our food. And as testament to practicing what I believed, our first garden yielded a handful of tough, stringy green beans because I thought we merely needed to plant seeds and come back a few months later to harvest dinner. Seeds grow, right? They’ve been doing it since the beginning of time!

Well, yes, seeds grow … most of the time … and if you’ve ever had a successful garden, you know that if you want things to grow where you choose to plant them, and if you want an abundant harvest, you need to put a little work into it. Some people argue that this isn’t natural. They say that the day we went from being hunters and gatherers to becoming farmers, gardeners, and ranchers, we started altering nature.

It is true that few domesticated animals (or plants) live a truly natural life, but if you insist on letting nature take its course 100% of the time, you will find yourself with little to eat. Nature does not think we humans need to eat any more than predators and parasites, so if you want to be totally “natural,” you’ll have to take what is left after the coyotes and raccoons have had their share of chickens. Luckily, nature also is inherently redundant. After moving out to the country and starting to raise our own food, I quickly realized that the number of offspring an animal had was directly related to that baby’s chance of survival. In some cases the chance of survival is limited by the fact that the animal is meant to be lunch for another animal. 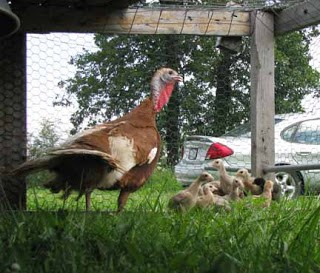 Birds that live on the ground like chickens and turkeys have a dozen or so babies every year if they go broody. (Unfortunately, a lot of breeds today have had broodiness bred out of them, but that’s a topic for another post.) They have to have a lot of babies in their life to simply have one pullet grow up and reproduce and serve as a replacement for its mother. By protecting them from predators, odds are quite good that the cockerels will survive a few months and make a great chicken dinner for us, and that the pullets will grow up and become layers for us. And in spite of what the factory egg farms would like us to believe, it is possible to protect chickens by giving them large fenced-in areas in which to roam outside and providing them with a chicken house in which to roost at night. 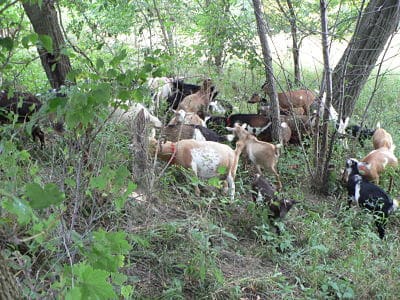 In some cases you might also need to provide nutritional supplements for livestock. Although our chickens are incredibly healthy, our goats need supplemental minerals, especially copper. Someone once asked me, “Who puts out supplemental minerals for them in nature?” Mother Nature does! Goats were never found living wild on the Illinois prairie, and there is a very good reason for that. This area does not have what they need to thrive. Goats are found living wild in deserts and mountainous regions. Cattle, on the other hand, which are more closely related to bison, do just fine on the prairies with little additional inputs. If you happen to live in the mountains or a desert, you will probably have a much easier time raising goats than I do.

Unfortunately, Big Ag companies claim that what they are doing is not any more unnatural than what an organic farmer is doing. I disagree. The farther away you get from nature, the more problems you are causing, which means the more problems you have to fix. All of the high-tech and inhumane fixes in factory farming are created to solve problems created by factory farming, such as needing to debeak laying hens that are given only half a square foot in which to live. (I’d get crabby and try to kill someone too if I didn’t have more space than that!) Hens don’t try to kill each other when they free range on open pastures.

But even in a seemingly natural farm environment, we may have some human-caused problems that didn’t exist 100 years ago. Today’s selenium-deficient soil grows selenium-deficient forage. Water pumped up from 100-foot deep wells may be high in sulfur or iron, which can bind with copper and selenium, causing deficiencies. So sometimes we have to supplement animals to fix the problems that we are causing in their environment.

Unlike the Big Ag companies, however, I don’t think we need high-tech, expensive answers. I believe that nature has the answers. By attempting to mimic nature as much as possible — rather than fight it — we can raise livestock and grow gardens “naturally” without the use of synthetic chemicals or confining animals in filthy conditions.

2 thoughts on “What is natural?”