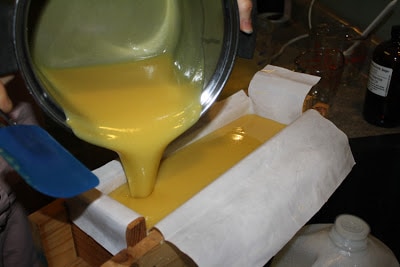 When writing the soap making section of Homegrown and Handmade, I decided to look at some articles and do some online searches and see what others have written about making soap. To be completely honest, I was a little nervous about writing on the subject because lye can be pretty dangerous stuff. On the other hand, I didn’t want to scare people so badly that they would be too worried to even attempt making soap. I wondered how I could reach a happy medium — stay safe, but don’t be paralyzed by fear!

There is really only one word to describe how I felt about some of the articles — horrified! You see, I haven’t looked for soap making information in at least six or seven years. I’ve simply been making soap. I went to a couple of conferences five and six years ago, and I learned a lot from those experiences.

Although soap making has been gaining in popularity, it never occurred to me that novices might be writing and videotaping all sorts of things and publishing them online for everyone to see and read. Some of these articles and videos are good, but some are really scary. I wonder if some of these people have actually ever made soap, or if they’re just copying info they read somewhere, because some of the recipes I found would create a very poor quality soap.

First, get a digital scale, and don’t even consider a recipe that does not include exact weights of oils and lye. Yes, I know our ancestors made soap without a digital scale, but they didn’t buy any of their ingredients, so when they wound up throwing out batches, it was only their time that was wasted. In a letter, John Adam’s niece once lamented that she had to make three batches of soap one time before she got one that was any good. And the inexact method used a hundred years ago is also why “lye” soap has a reputation as being so bad for your skin.

Do NOT try to make your own lye. While I think it is fascinating that our ancestors made their own lye from ashes in their fireplace, it was a VERY inexact science, and it took years to get the experience to make a decent batch of soap. Yeah, if an egg floats in the lye solution, it’s “good enough” to make soap, but how much of the egg should be floating above water? A floating egg is not exact. It’s also important to note that an egg will float if it’s simply older and has a large air pocket. And if the egg didn’t float, you’re supposed to run the water through the ashes again. Well, how do you know if it’s too strong then?

Do NOT use a recipe that is inexact. That means don’t use a recipe that says to use “one can of lye” — what size can? And one thing I learned early in my soaping days is that a 12 ounce can of lye NEVER had 12 ounces in it. It usually had more — often as much as half an ounce more, which is enough to take you from a gentle soap to a caustic soap.

That also means that you should not use a recipe that says something like “5 cups oil.” There are two things wrong with this. First, you should weigh your oils, not use measuring cups, because weighing is more precise, and saponification values are based on weights of oils, which are different than volume.

Second, every oil has a different saponification value, so you should use more or less lye, depending upon the type of oil you use. And this takes us back to the above rule — I have never seen a saponification chart for homemade lye, so you would totally be winging it to know how much oil to use with homemade lye.

While most of the bad advice fell into the “too relaxed” category, one thing I saw on several sites went way over the top with precision — saying that the lye and oils have to be the exact same temperature when you mix them together. I never saw that advice when I started making soap, and I know it’s not true, because I used to do soap demos in a park, and my lye and oils were not even close to the same temperature.

Out of curiosity, I made five batches of soap one day, and  I actually took the temperature of the lye and oils, which I haven’t done in about seven or eight years. In the first batch, I mixed them together when they were both 105 degrees. As typically happens when I’m soaping — because I take all of the milk out of the freezer when I start — with each subsequent batch, the frozen milk got more and more thawed, and by the end, my lye mixture was 140 degrees, and the oil was still 105 degrees.

When you start with less-frozen milk, the lye mixture gets hotter, which means trace happens faster. Trace is the term used to describe the soap mixture when it is the consistency of pudding and is ready to pour into the molds. So, it really is not important to have the oil and lye at the same temperature.

It is important, however, that the temperature will not be more than about 120 when they are mixed together, simply because you could wind up with a batch that seizes. Seizing is the term used to describe the soap mixture when it turns into mashed potatoes, at which point it is impossible to get it into a mold. It won’t be pretty, but it will still turn into soap.

So, what’s so bad about telling people the oil and lye have to be same temperature? It’s too hard, and when you make it too hard, people mess up. I read about one woman whose husband came in and drank her lye mixture that was sitting on the counter cooling. (She’d left the room.)

There is another story of a woman who was waiting for her lye mixture to cool, and her toddler grabbed it and dumped the whole pitcher on himself — yes, he had serious chemical burns all over his body and in his eyes.

And one of my former soap students let her lye mixture get too cool, so she put it in her microwave to heat it back up, and it blew up her microwave. Please note, I did NOT tell her they needed to be the same temperature. So, in the book and in my classes, I am telling people that they do NOT need to get the lye and oils at the same temperature, because that kind of perfectionism just causes problems.

Making your own soap is a lot of fun, and the product is more gentle than anything you can buy in the store. But you have to be sure that the recipe you use is accurate.

In addition to following the above rules, you should also double check the amount of lye in a recipe by using an online lye calculator like the one at Savvy Homemade or  Majestic Mountain Sage. It is always possible that even the most knowledgable soap maker could accidentally type in the wrong amount of lye when writing down a recipe.

Complete soap making instructions and recipes are included in Homegrown and Handmade, and an online soapmaking course is part of my membership program, Goats 365.

More Articles About Soap and Soapmaking

Why I’m still making soap after all these years?

Is your soap really soap?

Want to know more about ingredients in soap?

Subscribe to get our weekly newsletter, and we'll send you a downloadable list of ingredients for making soap.