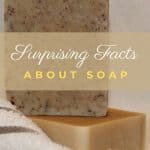 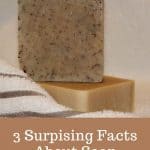 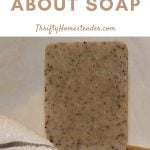 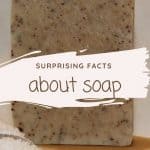 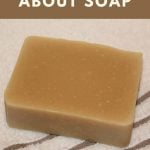 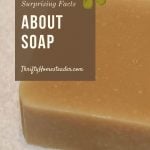 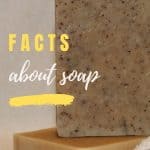 Because I make my own soap and teach soapmaking classes, I clear up a lot of misconceptions about soap. Through the years, there are three ideas that keep coming back again and again.

Can you teach me to make soap without lye?

If you’ve seen someone say they make soap without lye, they are not really making soap. They are doing melt-n-pour. They are buying a loaf of soap that was made by someone else who used lye, and they are simply melting down the soap, adding fragrance and/or color, then pouring it into molds to harden. When you see the phrase “sodium cocoate” on a soap label, that means that coconut oil was saponified with sodium hydroxide. Sodium palmate means palm oil was saponified with sodium hydroxide, and so on. If someone simply puts “saponified oils of …” on the ingredient list, that means they used lye to saponify the oils.

This does not mean, however, that there is lye in the finished soap. If the soapmaker is using a digital scale and doing it correctly, there should be zero active lye in the soap. There should be an excess of oil so that the soap is superfatted, which makes it more gentle on the skin. Back in the old days before the invention of digital scales when everyone was making lye from ashes in the fireplace, it was easy to wind up with too much lye in the soap, which is why “lye soap” had a bad reputation.

Most “soap” in the store is not really soap.

Most of the bars in the store are actually detergents, which strip your skin of all its natural oils. Have you ever seen the ad that says their cleansing bar doesn’t leave a film on your skin like soap does? That’s a detergent bar. And that “film” that soap leaves on your skin are natural oils, and that is a good thing. It’s like cleaning and moisturizing in one step.

What’s in store-bought cleansing bars? Chemicals such as sodium lauryl sulfate, which are surfactants. They are also filled with other artificial ingredients, such as fragrance, which often include carcinogenic and endocrine disrupting chemicals. Is your soap really soap?

I want to make liquid soap because bar soap dries out my skin too much.

If the so-called soap in the store dries out your skin, that’s because it’s probably not soap. (See above point.) But if it is real soap … many of the less expensive natural soaps use a large percentage of coconut and palm oil because they are cheap. (Yes, if you buy coconut oil in 5-gallon buckets, it’s really cheap.) In fact some soaps are 100 percent coconut and palm. Although those oils clean well, they also tend to be more drying.

My main soap recipe uses 54% olive oil, and I have many customers who have been coming back year after year because my soap does not dry out their skin like other soaps. The only difference between liquid and bar soap is the type of lye used — sodium hydroxide or potassium hydroxide. Beyond that, you can use any combination of oils that you want, and it’s the combination of oils that determines whether a soap is moisturizing or astringent. For example, if you have dry skin, you should use more olive oil, whereas if you have oily skin, you should use more coconut and palm oils. The fact that I can personalize my soap is one reason I continue making my own goat milk soap after all these years.

If you want to learn to make your own soap, I have an online soapmaking class that includes videos, checklists, and other print outs that take you through the process step by step. Although it includes recipes, it also includes instructions in how to make your own recipes, so you can create a soap that best meets your needs.

If you prefer to learn from books, here is my review of a natural soapmaking book.

If you’re thinking that you’ll just find a recipe online, be sure to read this article about all of the incorrect and sometimes downright dangerous information about soapmaking that is shared on some websites.

Want to know more about ingredients in soap?

Subscribe to get our weekly newsletter, and we'll send you a downloadable list of ingredients for making soap.

6 thoughts on “3 Surprising Facts About Soap”

Thrifty Homesteader is a participant in the Amazon Services LLC Associates Program, an affiliate advertising program designed to provide a means for sites to earn advertising fees by advertising and linking to amazon.com. You pay the same price when you purchase through affiliate links as you would if you went directly to Amazon, and our site earns a small commission, so by shopping through our links, you are helping to support our blog so that we can continue to provide you with free content.
256 shares
256 shares