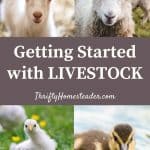 When you decide to start a homestead, whether in the city or country, it can be tempting to buy a few critters of every species that you can afford and that your property or home owner’s association will allow. But that may not be the best approach. Trust me on this. That’s exactly what we did. Within only a few months we had chickens, turkeys, ducks, goats, and cattle. Within a year we’d added sheep and rabbits, and pigs came shortly after that. Some of these animals are definitely more challenging than others. So, where do you start?

Chickens and other poultry

No doubt about it — chickens are the gateway livestock. I often say that if you can take care of a cat or dog, you can take care of chickens. Because most cities allow chickens, you may not even need to move. And because they don’t require a lot of space, they can easily fit into a backyard. If you go out of town for the weekend, you can fill up the waterer and feeder, and they’ll be fine until you return. Most neighbors are more than happy to collect eggs for you daily, especially if you tell they can keep the eggs they collect. For more on keeping chickens in the city, click here. If you’re worried that chickens will give you bird flu or give lice to your children, check out this post.

What about ducks or other poultry? Chickens are definitely the easiest. I do not recommend ducks unless you have a pond. No, the ducks don’t have to have a pond, but most duck owners are happier when their ducks have a pond. They do have to splash around in water and submerge their head, so they make a big mess if you try to use a chicken waterer — and they can’t submerge their head in that anyway. Do you really want to be filling up and dumping a kiddie pool for them every day? Do you want to be cleaning out a coop every day because of all the splashed water?

Turkeys are almost as easy as chickens. They have a slightly higher mortality rate as babies, but once they’re a couple weeks old, they are not much different than chicks. They do get a lot bigger than a chicken though, and some people find them scary.

For more info on chickens, check out: A Beginner’s Guide to Chickens

Further reading: Chickens vs. Ducks: What’s the difference when it comes to eggs?

Trying to decide which animals to add?
Check out >> “Choosing Livestock for Your Homestead” Course

Ten years ago I did not understand why anyone would want hair sheep. Now we raise them. Back then we had Shetlands, and I said it made no sense to have an animal that will only give you one product (meat) when you could so easily have an animal that gives you two products (meat and wool) for the same investment of time and feed, other than an annual shearing. But then my daughters moved away, and the wool and roving began to pile up. Without my oldest daughter to market the wool through the Internet and fiber shows, it went nowhere. As much as I loved the Shetlands, I finally decided to sell them all. Within a couple of weeks, I had my three pregnant Katahdins, which naturally shed their coat, so they don’t require shearing.

One reason a small homesteader might prefer hair sheep is that sheep shearers are getting to be as rare as hen’s teeth in some parts of the country. And it’s almost impossible to get someone to come to your farm to only shear a few sheep. Our shearer had a 20-sheep minimum, which was not a problem for us, but that’s a lot of sheep for someone who just wants to feed themselves.

Hair sheep graze, so they don’t require additional feed in the summer, and you give them hay during the winter. You just need to make sure they have water available all the time, as well as good fencing, although they don’t challenge fences like goats and pigs.

If you want to produce your own dairy products, goats are easier to handle than cows and produce more milk than sheep. Goats also eat less and poop less than cows, meaning less barn work. Although you don’t have to milk 365 days a year if you let moms raise their babies, you will have to be committed to milking at least daily after kids are sold or buck kids are weaned (to avoid unwanted pregnancies because they reach sexual maturity at only a few months).

You can make almost all the same cheeses and dairy products with goat milk as you can with cow milk. We’ve made cheddar, mozzarella, parmesan, colby, gouda, and other cheeses totaling around 18 varieties. We also make yogurt and buttermilk. The only product I find disappointing with goats is butter because it does not have that “buttery” taste that cow milk butter has. It is also white, so I always felt like I was spreading Crisco on my toast.

Some people worry they won’t like the taste of goat milk. Although each mammals milk tastes slightly different, it should not taste bad. If it tastes “goaty,” there is usually a sanitation problem, although I have heard of a few goats that simply produced milk that tasted like that. Even after 15 years, goaty-tasting milk still makes me gag. But with good sanitation, that’s not a problem.

More on milk that tastes “goaty” >>

For more info on goats, check out my Beginner’s Guide to Goats.

Why not pigs and cattle?

In a word — size. If you are totally new to livestock, it is far less intimidating to get started with animals that do not outweigh you. We got Irish dexter cattle within a month of moving to our homestead, and I nearly had a heart attack more than once. I chose them because they were the smallest breed, but I quickly learned that there is not much difference between a 500-pound cow and a 1000-pound cow when it comes to handling them.

We started with Tamworth pigs but eventually moved to American Guinea Hogs because of size and temperament. Although the guineas do outweigh us, they max out at 250-300 pounds, so they’re not nearly as scary as a 800-pound hog or bigger.

You can’t have just one!

Keep in mind that all livestock are prey animals, which means they need to be in groups to feel safe. This means you need a flock of chickens or sheep, a herd of goats, and so on. It doesn’t work to have a chicken, a sheep, and goat because they don’t speak the same language. They don’t eat the same food. Plus, it is not more work to care for three or four of a species than just one. They all need food and water daily, and even if the waterer or water bucket isn’t empty, it needs to be dumped and filled with fresh water to keep your animals healthy.

On the flip side — you also don’t need to start with too many animals. If you are planning on breeding, your flock or herd will grow faster than you think. Since sheep and goats usually have twins or more, your herd will more than double annually.

6 thoughts on “Getting started with livestock”

Thrifty Homesteader is a participant in the Amazon Services LLC Associates Program, an affiliate advertising program designed to provide a means for sites to earn advertising fees by advertising and linking to amazon.com. You pay the same price when you purchase through affiliate links as you would if you went directly to Amazon, and our site earns a small commission, so by shopping through our links, you are helping to support our blog so that we can continue to provide you with free content.
647 shares
647 shares