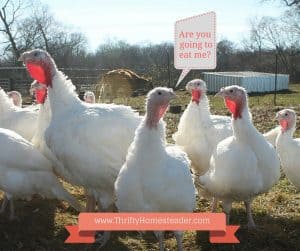 The children chased the chickens. They couldn’t understand why the chickens didn’t want to cuddle. Last week was the first week of Nature’s Farm Camp on our homestead, and I had to explain farm animal psychology to the children.

I often find myself playing the role of psychologist when people are first introduced to chickens, turkeys, goats, sheep, cows, and other farm animals. What do all of these animals have in common? They are prey animals. That means that their life often ends as someone’s dinner. 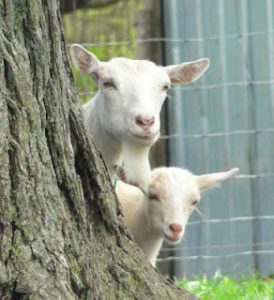 Most people have experience only with animals that are historically predators. Dogs and cats  in the wild kill and eat other animals, so they don’t live with the fear that prey animals experience every moment of their lives. But what about small dogs? They know they can be prey, which is why so many of them are so different psychologically than bigger dogs. They are much more fearful, which results in them barking more and being more likely to bite.

When a prey animal first meets you — whether it’s a chicken meeting visitors on our farm or a goat that has just gone to its new home — the first question on their mind is, “Will this person eat me?” It should come as no surprise that most of them don’t want to get too close to you. Goats were actually domesticated before dogs, but they aren’t as friendly as dogs because of their inborn fear of being eaten. But with time, they will grow to trust humans and can be just as loving as a dog.

A recent study showed that goats can communicate with people using eye contact just like dogs! I tell people all the time that goats are basically vegetarian dogs.

So the next time you visit a farm or buy a farm animal, don’t take it personally if the animal doesn’t warm up to you right away. It’s normal farm animal psychology.

How to become best friends with farm animals

Read more: How to Tame a Goat

Thrifty Homesteader is a participant in the Amazon Services LLC Associates Program, an affiliate advertising program designed to provide a means for sites to earn advertising fees by advertising and linking to amazon.com. You pay the same price when you purchase through affiliate links as you would if you went directly to Amazon, and our site earns a small commission, so by shopping through our links, you are helping to support our blog so that we can continue to provide you with free content.
146 shares
146 shares