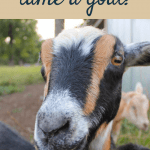 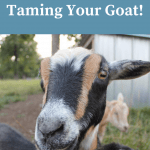 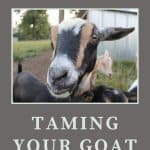 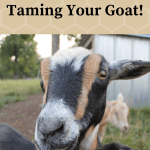 Many years ago when we started to have a few too many kids and didn’t give them enough attention, we got a crash course in taming wild kids. We learned very quickly that you can’t just leave baby goats out in the pasture and expect them to be as friendly as the family dog.

How to tame a goat

Even friendly goats tend to run more when they’re in a big pasture, so start by putting an unfriendly goat in the smallest space you have in your barn. Our smallest stalls back then were 10 x 10, so I put two does in there, and I started by simply going in there and just sitting with them.

Goats are curious creatures and will want to check you out at some point. You could just take your phone and check email or something like that. Just hangout for at least 15 minutes a couple of times a day.

After a couple of days, go in there with a pan of grain or alfalfa pellets, although the grain might be more tempting to them. Set it on the ground about a foot in front of you. When they start eating it, reach out very slowly and pull it towards you very slowly.

Then over the course of a few days — or faster if they’ll go for it — pull the pan of grain into your lap. When they are willing to eat from the grain in your lap, after a day or two, put your hand on their shoulder while they’re eating, then start petting them. It may feel like you’re taking two steps forward and one step back every day.

Just remember that they’re prey animals, so the first thing on their mind is that you are going to eat them. They just have to get over that idea. The bottom line is that they don’t trust you.

If these are does that you’ll be breeding, the other thing to remember is that once they kid, they tend to get friendlier when the oxytocin is initially flowing right after birth. So, that’s a great time to spend more time with them and also start to handle their udder.

Don’t even try to touch the udder before they kid, but definitely start handling it right after they kid. When I have first fresheners, the ideal is to start milking them on day one. You can usually do it right there in the middle of the stall (again because of those hormones). You’re not going for volume. You’re just practicing.

If you can get them friendly enough before kidding to jump on the milk stand for you, do that every day and give them just a handful of grain so that they’ll want to jump up there for you afterwards.

It’s not the best idea to do a bunch of painful stuff to them if they don’t trust you yet, so avoid anything unpleasant that’s not absolutely necessary. Their hooves can probably wait.

Some people make the mistake of only putting does on the milk stand for things like hoof trimming and shots before they kid so they think the milk stand is a horrible place.

Are you wondering what happened to those does that were wild as deer all those years ago? They became wonderful milk goats that were easy to handle. We grew to love one so much that she lived on our farm until she died at age 12, and her daughter is now one of our favorite milkers.

What are your favorite tips for getting a goat to trust you?

Thrifty Homesteader is a participant in the Amazon Services LLC Associates Program, an affiliate advertising program designed to provide a means for sites to earn advertising fees by advertising and linking to amazon.com. You pay the same price when you purchase through affiliate links as you would if you went directly to Amazon, and our site earns a small commission, so by shopping through our links, you are helping to support our blog so that we can continue to provide you with free content.
2971 shares
2971 shares