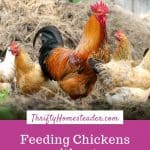 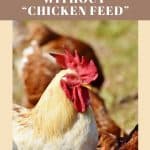 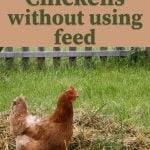 Urban homesteader Todd Allen of Chicago explains how they feed their chickens without any purchased feeds.

My wife and I are urban chicken keepers.  For the past four years we have not fed commercial feed and our flock of nine hens is healthy and productive.  We hardly buy them any food at all.  It was not our plan when we started keeping chickens.  We did not know it was possible.

We knew given sufficient land, chickens can survive mostly on forage and scraps.  We also believed the common “wisdom”:  without feeding a complete and balanced chicken feed formulated for layers, hens can’t sustain high rates of laying and their health is likely to suffer.

Feeding chickens in the beginning

We have been gardeners for decades and do it intensively year round with a hoop house, extensive trellising and many other elements in an effort to maximize productivity.  We started out with our chicks penned eating commercial feed, giving them treats from the garden and short supervised periods on the lawn and in our compost area.

We transitioned to free ranging using the green version of plastic snow fencing on poles of conduit to control where they roam.  We expanded our flock from 3 to 6.  By our second summer we wondered if we were endangering their health because they weren’t eating enough feed.

They picked out fragments of grain but weren’t eating the powdery bits with the supplemental vitamins, minerals and other things we believed they needed.  But the eggs were great.  The more they foraged our lawn and compost piles and the more they got from our garden the better the eggs looked and tasted.  And the hens looked good too.

But the areas our hens had regular access to were severely overgrazed and when harvest season ended we expected to be feeding mostly layer ration.  We had tried several varieties, even premium organic brands but the hens were increasingly fussy.

We tried a variety of feeders as the hens would dump what they could on the ground and scratch it into the dirt.  And we dumped a lot of picked over feed from the feeders into the compost.  It bothered us to be wasting so much purchased feed.  Expensive feed with full sales tax as opposed to the much lower tax one pays here for people food.

A chicken keeping friend clued us into spent brew grain, a free waste product from breweries.  The growth of small craft breweries provides easy access to an unlimited supply.  Chickens like the moist cooked grains and when stirred into layer ration it combined with the powdery bits greatly reducing our wasted feed.

Cost became less of an issue but I wondered how I might provide year round more of the fruits and vegetables our hens craved.  I got tips from friends.  We got bruised produce from a couple vendors at a local farmer’s market.  We learned of fruit trees with unwanted dropped fruit. We learned of another that was never harvested.  We canned enough that our chickens would have apples, pears and peaches all winter to supplement their feed and brew grain.

I was telling a friend about our adventures to feed our chickens.  He told me he regularly goes dumpstering and sees a lot of produce which he mostly leaves behind and asked if I’d like to join him.  He gave me rules: be discrete, pick up spilled trash before diving, never make a mess, and don’t take from dumpsters utilized by others, especially in areas with homeless or disadvantaged people.

I started out joining him once every three weeks for a midnight run in his pickup truck.  He would usually get a case or two of cheeses and cured meats and we would fill the rest of the truck with produce for the chickens.

I also went dumpstering alone with bicycle and trailer.  My wife joined me, and we did bigger trips in her car.  Dumpstering provides us with tremendous variety.  I started out getting produce but soon expanded to whole grain breads, seeds and nuts, grains, meats and fish.  We were using very little chicken feed and our last bag lasted for months.  When it ran out we didn’t get more.

I read a lot about how and how not to feed chickens.  But we did not follow advice for formulations or supplements.  We feed what we have, much of which is what we select from dumpsters.  Every day our hens get a mix of fruit and vegetables.  In the evening they get a scratch mix of grains, seeds and nuts.  We cook up large batches of “chicken stuffing” and freeze it in daily serving sized portions.

Common ingredients are tomatoes, potatoes, sweet potatoes, squash, cookable greens (mostly brassicas), chopped meats, fish and eggs all mixed with a binder typically a dense whole grain bread so the end result is not sloppy or gooey but a nice texture for the chickens.  We prefer to start with minimally processed ingredients but use modest amounts of cured meats such as ham, bacon, barbequed ribs, etc. without apparent harm.

Feeding perishable food is more work, but evolving the process, getting better and more efficient, has been satisfying.  And I enjoy feeding our chickens.  They are so enthusiastic at every meal.  I take as much pleasure watching our happy old hens eat as I do in watching the new chicks run and squeal with delight when getting their first bug.

If you’re interested in more chicken-related articles, you may enjoy:

Thrifty Homesteader is a participant in the Amazon Services LLC Associates Program, an affiliate advertising program designed to provide a means for sites to earn advertising fees by advertising and linking to amazon.com. You pay the same price when you purchase through affiliate links as you would if you went directly to Amazon, and our site earns a small commission, so by shopping through our links, you are helping to support our blog so that we can continue to provide you with free content.
8099 shares
8099 shares