Gail Damerow’s newest book, What’s Killing My Chickens: the Poultry Predator Detective Manual, should be on the shelf of every poultry owner. Whether you are dealing with common predators like raccoons and coyotes or the not-so-common, such as alligators, bears, and cougars, she’s got you covered.

If you saw the nine bookcases in my office, all filled with books, you might think that I have every book that I could possibly need. However, I will have to find a permanent space for this one on my chicken shelf. I thought I was fairly well versed in predators, but I learned so many things from this book. Here’s a sample …

The book is split into two sections — The first section is called “The Offense,” and covers the scene of the crime, evidence to look for, signs of mammals versus birds, as well as what you can do to prevent predator attacks by making it harder for them to gain access to your poultry and how to discourage them from coming around. She lists things that can be helpful, such as hanging up sweaty clothes where you don’t want the predators to go. And she lists things that are not so helpful, such as scarecrows and the citronella and pepper spray I already mentioned.

The second half of the book is called “The Suspects” and give a thorough description of every potential predator in North America. Each profile is accompanied by a map that shows you where you can find the predator, plus a picture of the animal and their scat, as well as their front and back tracks, size of tracks, length of stride and straddle. Reading this information made me feel like I was living in an old episode of a 1970s western where the tracker always knew what every footprint meant. 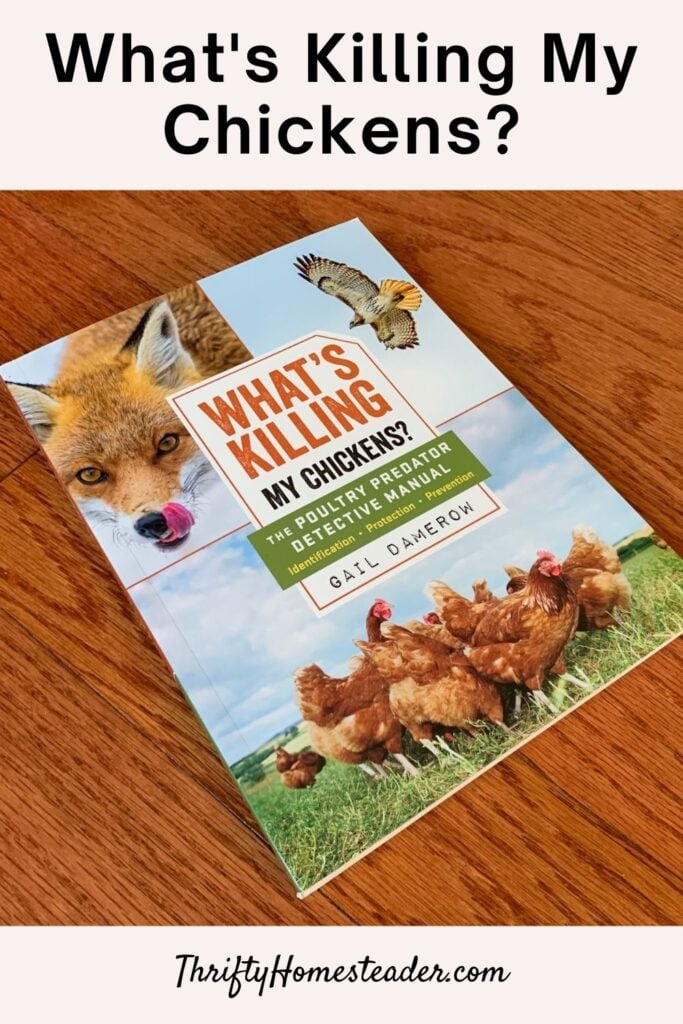 12 thoughts on “What’s Killing My Chickens?”

Thrifty Homesteader is a participant in the Amazon Services LLC Associates Program, an affiliate advertising program designed to provide a means for sites to earn advertising fees by advertising and linking to amazon.com. You pay the same price when you purchase through affiliate links as you would if you went directly to Amazon, and our site earns a small commission, so by shopping through our links, you are helping to support our blog so that we can continue to provide you with free content.
267 shares
267 shares