As I’m getting started with pigs, I was happy to discover Homegrown Pork: Humane, Healthful Techniques for Raising a Pig for Food by Sue Weaver, and I can’t imagine a more comprehensive guide to raising pigs. Not only is the book very well-organized and thorough, but it will certainly endear you to these intelligent and entertaining animals if you’re not already. In fact, Weaver calls pigs “the Einsteins of the farm animal world” explaining that they are so intelligent that they have been found to learn to use mirrors, work together to open gates, and even to play video games! Here’s a snapshot of some of the topics covered in the book:

How to Tame a Wary Pig

Weaver explains that it is important to spend lots of time with your pigs from the beginning so that they will be easier to handle. She shares the following tips for taming a pig which is wary of humans and teaching pigs to allow people to touch them.

Weaver includes many of her family recipes for using homegrown pork such as rendering lard from pork fat. Its important to know that pigs yield three different types of fat – leaf fat, fatback, and caul fat. This recipe calls for leaf fat which is found on the inside of the carcass around the kidneys, but you could use the same process to render other fat. Leaf fat is great for baking and should be rendered separately from the other types of fat, if you want to take advantage of its special properties. However, you can render all of the fat together, if you don’t want to bother with keeping it separate. This is a wet method of rendering lard. Deborah will be sharing her method of dry rendering next month. 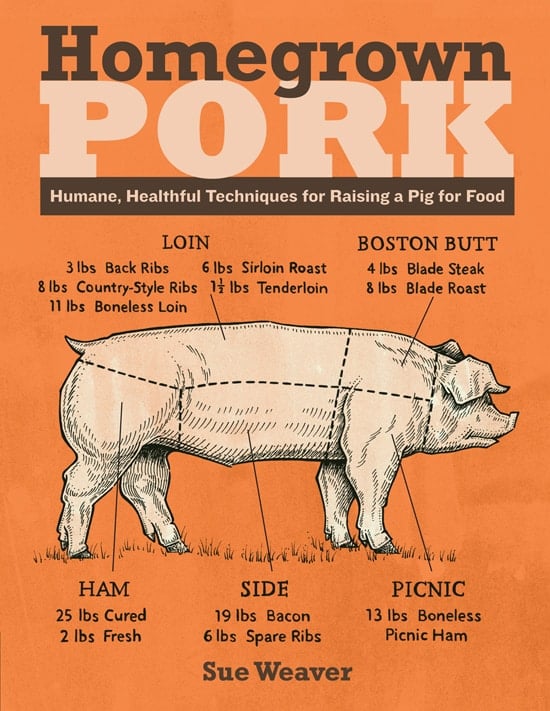 14 thoughts on “Homegrown Pork: Learn to raise ‘the Einsteins of the farm animal world’”