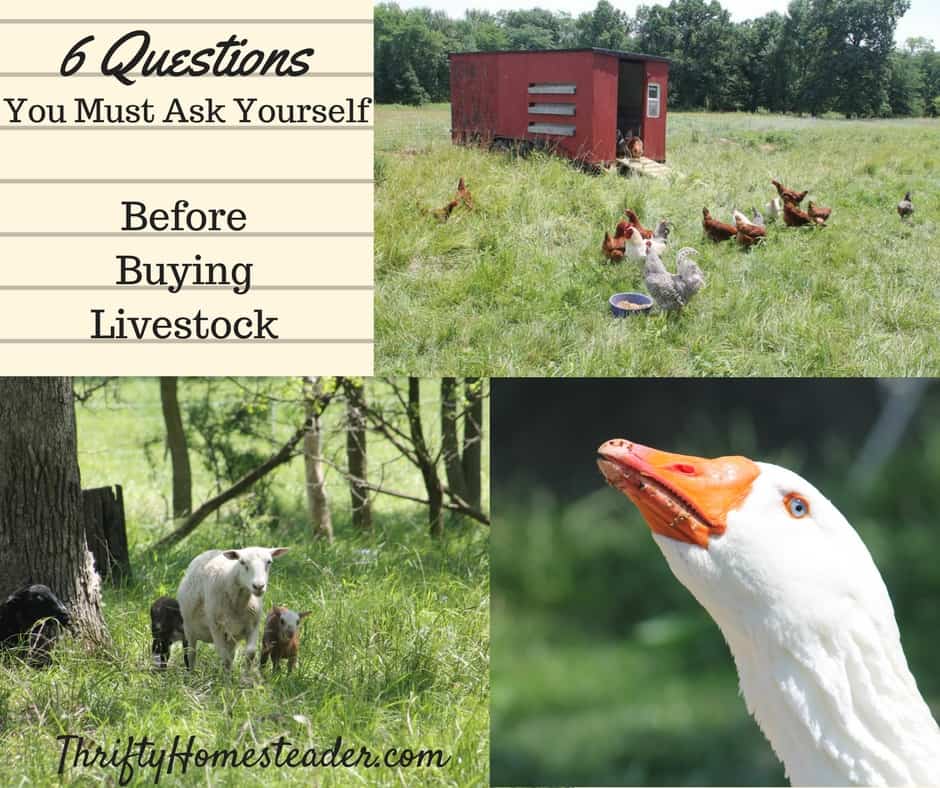 You’ve decided you want your own fresh eggs or goat cheese, so you find a few chickens or goats, bring ’em home and start enjoying the bounty, right? Wrong!

Buying livestock is a big responsibility, and it’s different from having pets in several ways. Dogs and cats can live with you in your house, and it’s not that hard to find a pet sitter or board them when you want to go on vacation. But that’s only the beginning. Here’s a list of questions you must ask yourself before buying livestock, starting with practical and moving towards emotional and philosophical.

Do you have proper fencing?

I recently received a phone call from a woman who wanted to buy a pet goat for her neighbor. She knew nothing about goats and thought it could just live in their yard like a dog, even though these people had no fencing. (I refused to sell her a goat.) But just any old fence isn’t good enough. It’s important to know that every type of livestock needs a slightly different type of fencing. Goats would jump over a single strand of electric fencing, but I’ve seen that work with pigs and cattle. On the other hand, woven wire works for goats, but pigs can lift it with their snout, push it up and go under it. A bucolic wooden fence works with cows, but goats can squeeze through wooden rails unless they are only a few inches apart. Do your homework and find out exactly what type of fence will work best for the animals you want to buy.

Do you have proper housing?

When we moved to our farm, there was a big horse barn here, so we thought we were set. Right? Not so fast! Although a big horse barn will keep animals protected from the elements, we quickly learned that it was not ideal for goats. If they were out in the pasture during the day and it started to rain, they’d be screaming their heads off. We’d run out there, put them in the barn, then put them out again half an hour later when the rain stopped. Then it would start raining again. Sometimes this scenario would repeat several times a day. It didn’t take us long to realize that goats need three-sided, run-in shelters where they could seek cover when it starts raining during the day. We also realized that those big five-foot wide horse doors were overkill for goats, and it was a pain running the goats through the barn to go outside.

An even bigger mistake was to put our chickens in a stall in the barn. First of all, the aisle of the barn has a concrete floor. Concrete + chicken poop = danger. It’s as slippery as a bar of soap in the shower. More than once I almost hit the ground when I slipped on chicken poop. The second problem was that although chickens will come inside at night, it was too much to expect them to go into a specific stall. It worked for awhile, but eventually the chickens realized they could roost anywhere in the barn.

So, research proper housing, even if the previous owner tells you they used a building for a specific purpose. Just because someone used a specific type of housing does not mean it’s ideal. (Re-read last paragraph for a great example.)

Are you willing to care for them properly 365 days per year?

How do you feel about working 365 days a year, through heat waves, droughts, blizzards, pouring rain, mud, ice, sprained ankles, backaches, and stomach flus? Now, if you’re just getting a few hens for eggs, this does not represent a huge investment of time. It’s not much more work than a dog or cat. But as you add more livestock to your farm or homestead, the time to care for them increases. Do not make any assumptions about animals reducing your workload — such as getting sheep so you don’t have to cut your lawn. That’s a ridiculous idea because they won’t mow it down evenly like a lawn mower would. And you have to feed them through the winter when the grass stops growing.

What are you going to do with your chickens when they’re only laying an egg or two a week?

Lots of people never think about what they’ll do with their hens when the laying gets to be so infrequent that the eggs are getting really expensive. That includes me. Our earliest hens lived to be five years old. One day I did the math and realized they were averaging one egg per week. It was a tough decision, but we ultimately had to admit that we really could not afford to have chickens that laid so little. If you only have three or four chickens, that’s more like having pets with benefits, and it costs less to feed them than a dog. But we had about 50 chickens, and they were eating a lot! The good news is that I discovered that stew hens are the most flavorful meat you’ll ever eat, and there’s a lot you can do with stewed chicken meat.

How do you feel about putting down an animal that’s suffering?

I’m not just talking about taking an animal to the vet and having the vet put it down. The vet office is only open about 40 hours a week, and sometimes vets are busy with another emergency. What would you do if you had an animal that was suffering, and no vet was available? Why do animals usually get sick or injured when the vet office is closed? Because there are 168 hours in a week, which means the vet office is open less than 25% of the time. This is one reason most homesteaders have a gun. Shooting is the quickest and easiest way to put down an animal. There are other options, but you need to think about this before you find yourself in an emergency situation. I’ve heard really sad stories of people who found themselves in this situation without a plan, as they tried to kill an animal by drowning or carbon monoxide poisoning.

How will you deal with the death of an animal?

This is a tough question to answer, but it is something you will have to face a lot. In modern society most people have a couple of pets, so they only have to deal with death once every ten years or so. If you have 50 chickens, 10 turkeys, 5 goats, 10 sheep, and 3 pigs, you’ll have to deal with death 78 times. It is inevitable. Either they die naturally or you put them down or butcher them. Someone gave a negative review to my book, Raising Goats Naturally, because the reader said there were too many stories of dying animals. In a 300-page book, there are three stories about a goat that died. If that makes the whole book too depressing for that person, then owning goats — or any livestock — is definitely not for them.

If you missed Monday’s post about 4 Questions You Must Ask Yourself Before Homesteading, check it out. Although I have known people who got into livestock that their spouse was not interested in, the other three questions are absolutely applicable to livestock.