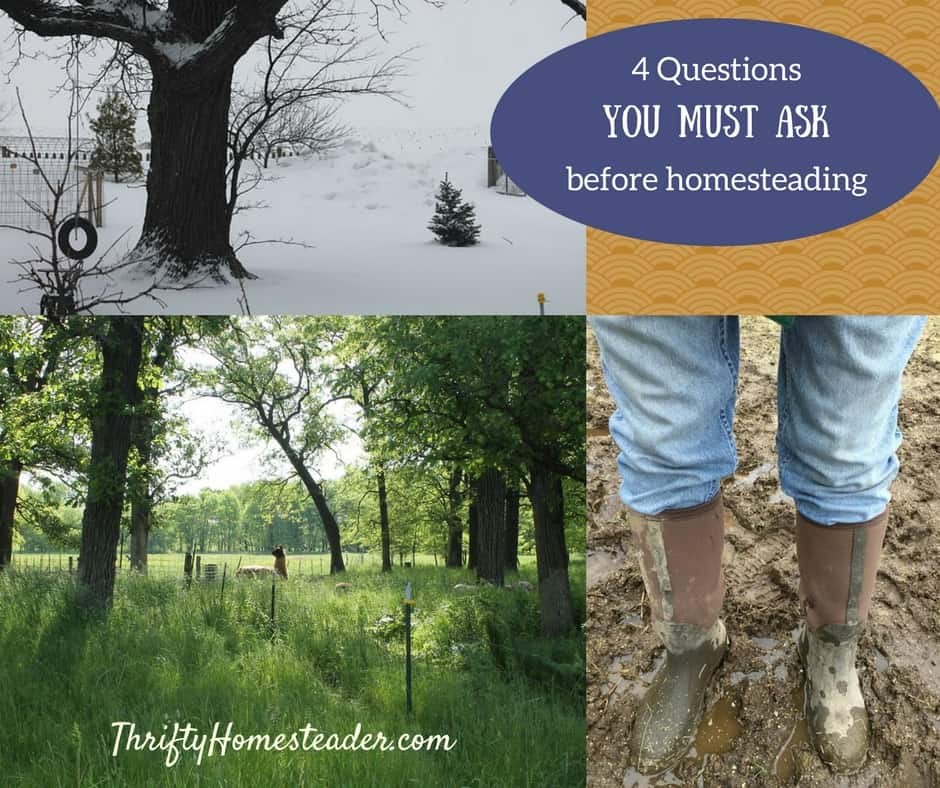 We’ve met so many people through the years who’ve told us that we’re living their dream. We totally understand. We dreamed about homesteading for about a decade before we dove in and did it. But we’ve learned a lot in the last 15 years. Sometimes I feel like the crash test dummy of homesteading. So, before you quit your job and head off to the middle of nowhere to live off the land, here’s a list of questions that you need to ask yourself.

If you have a spouse or significant other, is he or she on board 100%?

I’ve met a lot of people over the years who said they wanted to do this, but their loved one did not. I have to say that I feel for them. My husband and I met and married when he was in the Navy, and we were traveling all over the globe from city to city. Luckily we both changed in the same direction. Although I was the one who suggested homesteading, my husband was totally on board. He wasn’t interested in actually doing anything with livestock like I was, but he thought that living in the country and having a big garden sounded great. We complement each other well because I’m into greener food, and he’s into green energy.

I’m somewhat embarrassed to admit that I thought all of this was going to be really easy. After all, people had been doing this since the beginning of time. It couldn’t be that hard — right? Uh, wrong! People used to learn these skills from their parents, who learned them from their parents, and so on. Apparently many people know this. I’ve been asked lots of times through the years if my husband or I grew up on a farm. The answer is no. But luckily, there are lots of books, and we have the Internet. So, even if you did not grow up on a farm, you can learn. But that usually requires a lot of reading and/or attending a lot of conferences. I do sometimes meet people who think this is brain dead simple, but that simply is not the case. Finding a mentor is a great idea to help you navigate the abundance of information out there.

Who will take care of things if I get sick or go on vacation?

It is possible to start homesteading without having the answers to this question. But you need to figure out the answer ASAP. Even if you decide to never go on vacation again (because isn’t it like being on vacation when you’re homesteading), you will probably get sick at some point. If you have friends or relatives nearby, it’s a good idea to be sure they know how to do all of your chores in case of emergency. Regardless of how sick you feel, the animals still need to be fed and watered, and dairy animals have to be milked. Initially this is fairy easy to do. Many of your city friends will initially think this is really cool. But don’t count on them forever. They may eventually decide that it’s not that much fun, and you live too far away.

How do you feel about getting dirty?

This was not immediately obvious to me. We are not talking about a little dirt under the fingernails here. We are talking about birth goo, blood, poop, pee, and yes, lots of dirt. I don’t think I knew the meaning of dirty before we moved out here. If you have a germ phobia, this is definitely not for you. You don’t buy clothes for homesteading unless you’re shopping at garage sales or second-hand stores. Homesteading clothes are those that have been demoted from “town clothes” because you happened to be wearing them at the wrong time. Back when my daughters were still at home, someone came to pick up some goats one day, and I had just come home from a trip to town. I asked my daughters to please catch the goats for me because “this is my only pair of jeans that don’t have poop stains on them!” Bonus tip: Do not ever wear good clothes outside, thinking that it’ll be fine because you’re doing something that will only take a couple of minutes, and there’s no way you could dirty. That’s how most of my clothes become farm clothes. I couldn’t even tell you how many times I’ve relearned that!

I was originally going to include questions about livestock, I wound up with so many questions that it doubled the length of this post, so I figured livestock should have their own post, so stay tuned for that one.

If you’re already homesteading, can you think of any other questions people need to ask themselves before they start a homesteading lifestyle? Is there anything you didn’t think about before you got started?