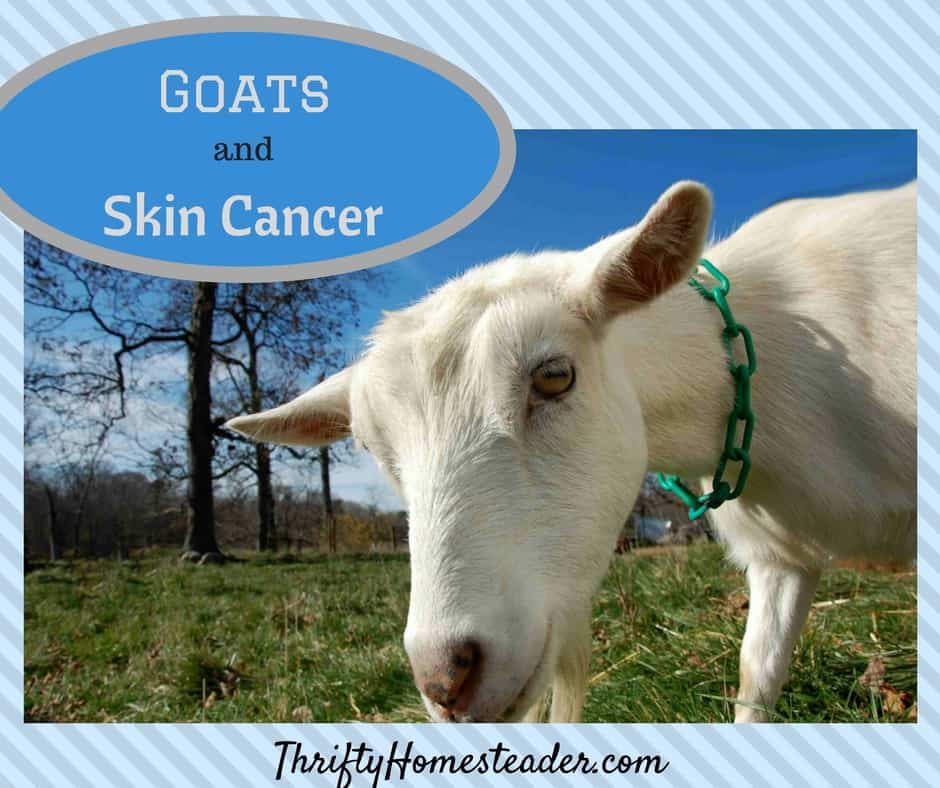 Even though my husband has had more cases of skin cancer than I can remember, it never occurred to me that goats could ever be a victim of that disease. Over the past 20 years, my husband has had it all multiple times, from dysplastic nevi and basal cells to squamous cells and even melanoma. They’ve all been removed when they were no bigger than the eraser on the end of a pencil. So, even though I’d seen many cases of skin cancer, they didn’t look much worse than an ugly freckle.

Last year when a lump appeared near the rectum of my goat Lizzie, I thought it looked like hemorrhoids. I didn’t think goats could get hemorrhoids, but it didn’t seem like a big deal, and I never actually thought about it when I was inside and could look it up. (Had I checked, I would have realized that hemorrhoids are not a problem in goats.) Over the months, the bumps got bigger, and they started to drain. I sent a picture to my vet, and she said to clean it daily and treat her with injectable penicillin. That didn’t help at all, and Lizzie hated it. Then I invested in an $85 prescription antibiotic cream (silver sulfadiazene). That also did nothing. At this point, we were assuming she had a skin infection that was antibiotic resistant.

Since Lizzie was 12 years old and retired, I couldn’t justify taking her to the university vet hospital for diagnostics. Plus she seemed fine. She was eating and acting normally. As the months went on, however, she seemed less happy, and we’d sometimes hear her grinding her teeth when she pooped. Finally we made the very hard decision to put her down. Since we had not used any antibiotics on our farm in years, I couldn’t understand how one of our goats had acquired an antibiotic-resistant infection, but we had no other explanation.

Then in October 2017, during a conference sponsored by the American Association of Small Ruminant Practitioners, a slide appeared on the screen that made me scream inside, “Lizzie!” I took a picture of the slide and immediately texted it to my husband with the message, “Remind you of anything?” He texted back, “Lizzie.” The title of the slide was “Peri-anal Squamous Cell Carcinoma.” Based on the experience of the speaker and the other vets in the room, there have not been any cases that were successfully treated. In most cases, euthanasia is the recommendation. In a couple of cases, they have attempted surgery and radiation, but the carcinomas always came back. In fact, one vet who had performed necropsies on goats with peri-anal squamous cell carcinoma said that the cancer had spread into and through the intestines and pelvic cavity of the goats.

Although there isn’t a cure for skin cancer in goats, I think it’s important for owners to know about it so that they don’t make an incorrect assumption like we did. During a break between sessions at the conference, I showed the above picture to the vet who seemed to have the most experience with it, and she immediately said that it was squamous cell. Other vets who saw the picture agreed. When I told her that my vet didn’t know what it was, she said she was not surprised because it’s probably not as common in Illinois as it is in states with stronger sunlight. So, our vet had probably never seen a case before Lizzie.

What you need to know about skin cancer in goats

White goats with light pink skin like Lizzie are especially at risk of skin cancer. This means it is most common in Saanens and Angoras, but can occur in goats with darker pigmentation. One vet said she had seen it in quite a few NDs, and one of the pictures showed a buckskin ND. In addition to squamous cell carcinomas, goats can also get basal cell and melanoma. The most common location for skin cancer in goats is exposed skin or skin with very little hair, such as nose, ears, eyelid, udder, and under the tail (because goats walk around holding their tail up). According to Goat Medicine, goats that repeatedly get udder warts may eventually wind up with squamous cell carcinoma, which will eat through the skin, ultimately causing mastitis that would necessitate amputation of the udder half.

It’s important to know what this looks like so that if you have a goat with it, you don’t waste time trying to treat for something else like a skin infection. Lizzie certainly did not like us cleaning the area, and she was not fond of the injections. The reason Lizzie’s picture looks different than the photo provided by one of my readers is because my reader didn’t try to “clean it up” and treat it like we did. Had we known that Lizzie had an incurable disease, we would have made the decision to put her down a lot sooner. That may not be the right answer for everyone, but we felt bad for not ending her suffering sooner. 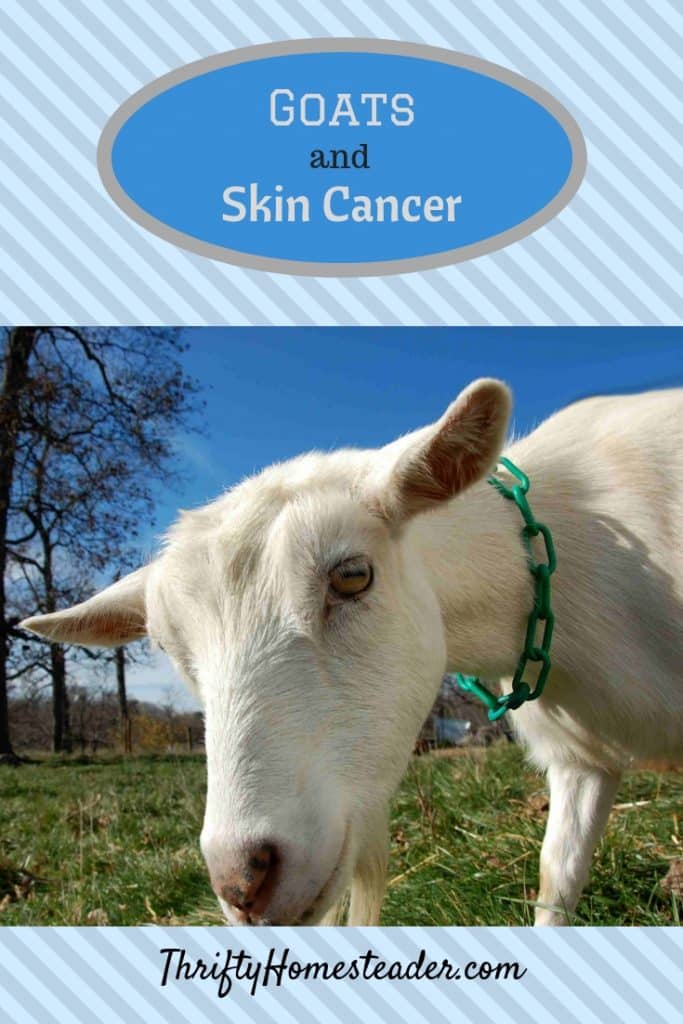 This post includes an affiliate link to Amazon. If you make a purchase after clicking on it, we receive a small commission while you pay exactly the same price as you otherwise would. We appreciate your support!

Thrifty Homesteader is a participant in the Amazon Services LLC Associates Program, an affiliate advertising program designed to provide a means for sites to earn advertising fees by advertising and linking to amazon.com. You pay the same price when you purchase through affiliate links as you would if you went directly to Amazon, and our site earns a small commission, so by shopping through our links, you are helping to support our blog so that we can continue to provide you with free content.
705 shares
705 shares