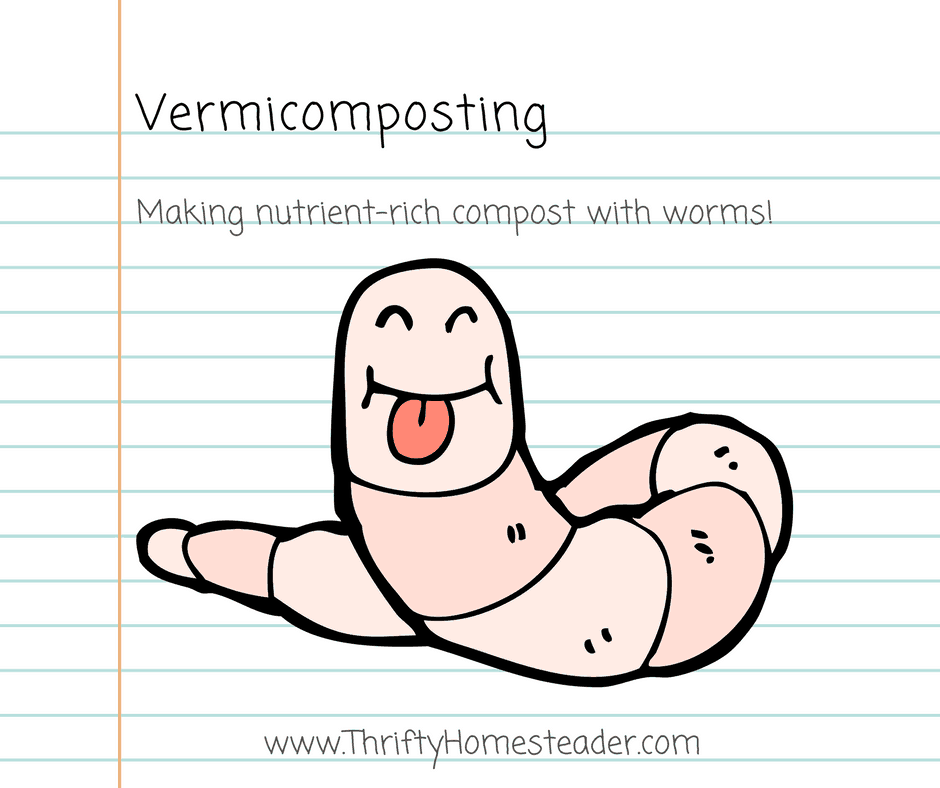 Vermicomposting (worm composting) is one of my favorite gardening subjects. Worms are exactly the right micro-mini “livestock” for munching down kitchen scraps and transforming them into a nutrient rich plant food. I just can’t wait to encourage folks to keep a herd of red wigglers by the back door or perhaps in the kitchen. Affectionately referred to as worm farming by those who sing the practice’s praises, it’s one farming adventure that can be pursued by landowners and apartment-dwellers alike.

How is vermicomposting different from traditional composting?

Redworms or red wigglers (Eisenia fetida) are most certainly found in traditional, outdoor compost piles. They play an essential role in breaking down organic materials into compost and they leave behind “castings,” which is just a fancy way of saying worm poop. Worm castings contain significant amounts of beneficial organisms, enzymes, and plant stimulants than a general compost.

They’re also much higher in available nitrogen, phosphates and potash than your average topsoil. What I mean by “available” is that the nutrients in castings are water soluble and therefore, easily absorbed by plant roots. Castings also immensely improve soil texture.

A vermicomposting system concentrates on confining redworms and feeding them a steady diet of kitchen scraps. By specifically feeding the worms as opposed to building a traditional compost pile, you’re intensifying the final product to produce a concentrated amount of a powerful and organic soil amendment.

Worms housing can be as simple as making a DIY plastic bin with holes drilled into it or you can a purchased fancy set up that resembles a condo. No matter which type you choose, some bedding will need to be added such as shredded newspaper, coir (coconut fiber), or dry leaves. Worm farmers also add a little compost, garden soil, sand, rock dust, or crushed eggshell which helps them digest food.

Worm bins should be kept moist if the worms are to survive (although not water-logged). Worms need the moisture to breathe as they take oxygen in through their skin. A good moisture indicator is to hold a handful of bedding and give it a squeeze. If a drop of water drips out, you’re good to go.

So, what do redworms like to eat? Most worm food will come from kitchen scraps that would otherwise be thrown away including cereal, grains, pizza crust, fruit peelings, vegetable peelings, cake, bread, melon rinds, coffee grounds, tea bags, lettuce, pancakes, oatmeal, eggshells, and pulp from juicers. Paper products like napkins and paper towels will be consumed, as well.

Some foods such as tomatoes, orange peels, peppers, and onion peels should be added to the bin sparingly. These items are at the bottom of the tasty list as far as worms are concerned.

Red wigglers are fed on average two to three times a week. Less often if you’re offering large portions. Before placing food into the bin, chop or shred everything up into tiny bits or toss them into a food processor. The smaller the food particles, the easier it will be for the worms to consume. Are you a fisherman? You can fatten up a bunch to use as fishing bait. Sprinkle some corn meal, wheat or rice bran, oatmeal, and chicken layer mash into the bin regularly.

This article is but a short introduction to what I consider the fascinating world of vermicomposting. I hope that you’ve become curious and will take the next step to becoming a worm farmer.

Chris McLaughlin is the author of six books including The Complete Idiot’s Guide to Composting (Alpha Books). She and her family live on a flower and fiber farm in the Northern California foothills. Hunt her down at her farm website, Laughing Crow & Company.

Thrifty Homesteader is a participant in the Amazon Services LLC Associates Program, an affiliate advertising program designed to provide a means for sites to earn advertising fees by advertising and linking to amazon.com. You pay the same price when you purchase through affiliate links as you would if you went directly to Amazon, and our site earns a small commission, so by shopping through our links, you are helping to support our blog so that we can continue to provide you with free content.
304 shares
304 shares