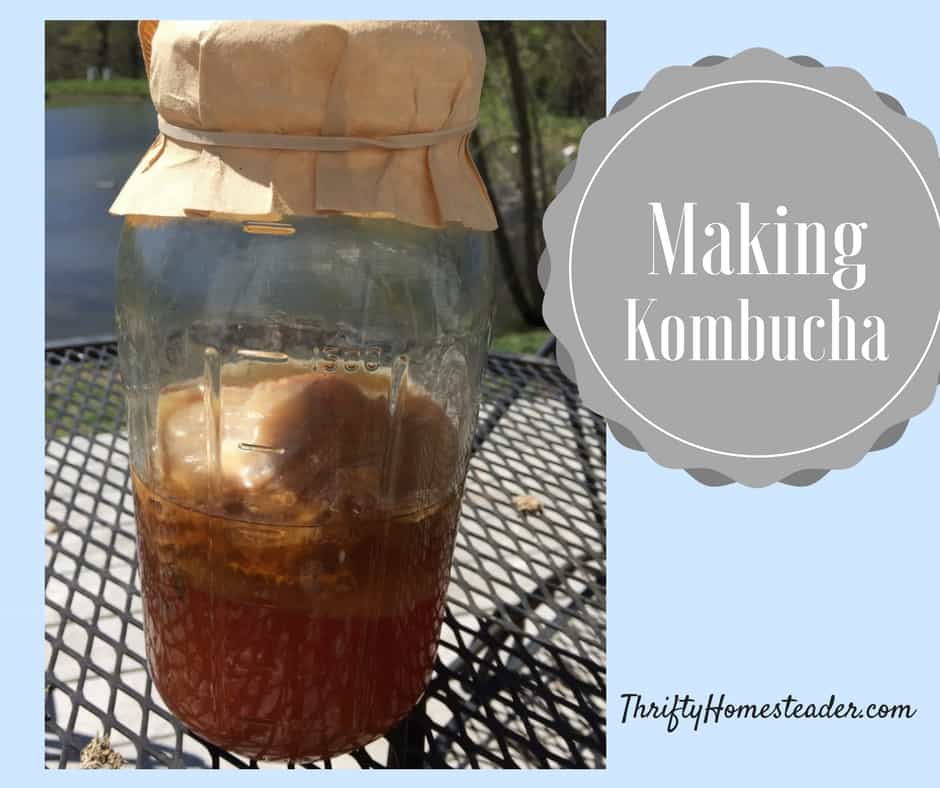 When I wrote the second edition of Homegrown and Handmade, I just could not let the book get reprinted again without adding all of the things that I wished I had put in the first one — like making maple syrup and raising pigs and starting a homegrown business. But I’m glad I didn’t put those things in the first book because I’ve got six more years of experience on all of those things to share. And I’ve started doing a few new things since the book first came out in 2011 — like making kombucha! Since I’ve never blogged about kombucha before, I thought this would be the perfect time to share my recipe with you, so here’s an excerpt from my book. And scroll down to see my interview with Hannah Crum, the Kombucha Mama herself.

In the first edition, I included a recipe for homemade ginger ale. It was a huge step up from carbonated, artificially flavored, heavily sweetened soft drinks, but it was not really naturally carbonated. It used commercial baker’s yeast to create carbonation, which is only sort of natural. Baker’s yeast was invented about 150 years ago, and it comes from a lab. Kombucha, on the other hand, is a truly natural means of creating a fizzy beverage, and because it’s fermented, it colonizes your gut with healthy bugs.

Kombucha is made using a SCOBY, which stands for “symbiotic colony of bacteria and yeast.” Although some businesses sell them, the best place to get one is from a friend who makes kombucha. SCOBYs reproduce like rabbits, and I am always happy to give one to a friend who wants to get started in making kombucha. I would not recommend starting with a dehydrated SCOBY, as the chances for failure are much greater than if you start with a healthy “newborn” SCOBY that was just plucked from a bottle of kombucha. (Yes, I tried a dehydrated SCOBY. Yes, I failed.)

You can use black, green, oolong, or white tea, or a combination of these, with caffeine or without. My personal favorite is a black-green blend. Basically, it has to be the tea plant with nothing more and nothing less. No chai, no Earl Grey, nada. That’s what the kombucha grows in, and if you want your SCOBY to stay strong and healthy, you need to feed it properly.

Dissolve the sugar in a quart of boiling water and add the tea. I prefer organic sugar, but you should not use honey because it has antibacterial properties, and what does SCOBY stand for? People have reported honey killing their SCOBY, so better stick with plain sugar. Let sit for at least 15 minutes, but I usually leave it for a couple of hours, so it can cool. Add a quart of cool water to dilute then pour it into a half-gallon canning jar with the SCOBY and cup of kombucha. You should not use store-bought kombucha because you have no idea how alive it is. Be sure to wait until the tea has cooled because hot tea can kill the SCOBY.

Let the tea sit for at least five to seven days and taste it. Some people let it go as long as 30 days. It’s ready when you say it is, although you want the SCOBY to have eaten up most of the sugar so that you are drinking a naturally fermented beverage rather than a sugary one. If you wait too long, it will have eaten up all of the sugar and become vinegar. If that happens, don’t worry, just make another batch using one cup of the vinegary kombucha as the starter.

If you want to flavor your kombucha, secondary fermentation is perfect for doing so. Pour a quart of kombucha into a one-quart canning jar and add frozen fruit, such as sliced peaches or raspberries (my two favorites). The freezing process has broken down the skin so that as they melt, the juice will pour into the kombucha, flavoring it, and the natural fruit sugars will give the kombucha something else to feed on. You can also add a little lemon juice, or grate up some fresh ginger for a naturally fermented ginger ale. You can drink it in a day or two. You may want to strain it through a tea strainer before drinking, but you don’t have to.

If you really love a particular peach tea or blackberry tea or whatever, you can take a fresh SCOBY and a cup of kombucha and make a batch using the flavored tea. Just be sure that you have other SCOBYs to carry on the kombucha making if this one dies. With so many flavored teas on the market, it’s impossible to know exactly how your SCOBY will survive any of them. Most SCOBYs can survive a single batch of flavored tea now and then, if you go back to plain tea in the next batch. If you’re like me, however, once your SCOBYs start having babies, you’ll have multiple jars of kombucha bubbling all over your kitchen and dining room.

Click to learn more about Homegrown and Handmade, including where to buy your copy.

If you want to learn even more about making kombucha, I recommend The Big Book of Kombucha by Hannah Crum, who I interview in the following video.