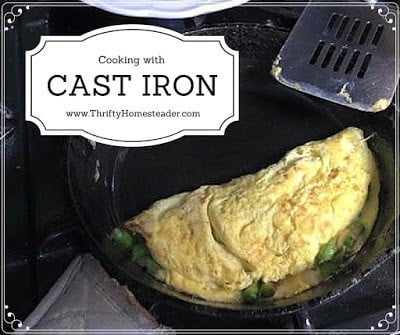 Everyone knows that cooking with “modern” non-stick cookware is a bad idea, right? In addition to the fact that the non-stick surface gradually flakes off and winds up in your food, it also emits toxic gases that can kill birds if it gets too hot. So, what do you do instead? Cook in cast iron, of course!

has been around since the 1800s, and it’s wonderfully non-stick when used correctly. The keys to taking advantage of cast iron’s non-stick magic are …

So, maybe you’ve heard all of this before, but you tried, and it didn’t work for you. Well, if a picture is worth a thousand words, a video is priceless, so I created this video to show you just how easy it is to cook with cast iron.

And unlike many of the best things in life, cast iron is actually less expensive than the chemical alternative. (Check out this Lodge L8SK3 Pre-Seasoned Cast-Iron Skillet.) On top of that, cast iron cookware will last so long that you can put it in your will. My son already has dibs on my cast iron when I die, but I imagine he’ll probably buy his own long before then.

9 thoughts on “Secrets to cooking with cast iron”

Thrifty Homesteader is a participant in the Amazon Services LLC Associates Program, an affiliate advertising program designed to provide a means for sites to earn advertising fees by advertising and linking to amazon.com. You pay the same price when you purchase through affiliate links as you would if you went directly to Amazon, and our site earns a small commission, so by shopping through our links, you are helping to support our blog so that we can continue to provide you with free content.
381 shares
381 shares