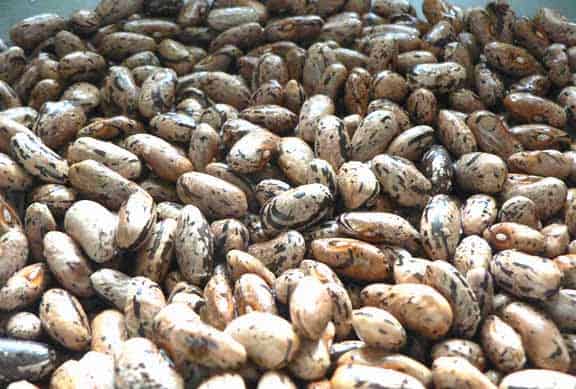 Beans are a misunderstood and maligned food. They are perfectly wonderful once you know how to cook with them. Although they take a long time to cook, they require very little attention, which means they actually take very little of your time. The variety of dried beans is astonishing with dozens from which to choose. Some are strongly associated with various ethnic cuisines, such as pinto and black beans with Mexican food and lentils and garbanzo beans with Indian cuisine. Many can simply be cooked with a few spices and a little salt for a very easy dinner. Others can be added to soups, such as chili and minestrone. Beans can be used for lunches or dinners, as a side dish, main dish, or snack.

Although a can of beans seems to be cheap enough, usually costing a dollar or less, you can save about 75 percent if you cook dried beans. To make life even more convenient, cook large amounts of beans and then freeze them for quick meals later. And cooking beans is an easy process – just the instructions below.

Cooking times for beans will depend on a few factors. The larger the bean, the longer it takes to cook. Smaller beans, such as pintos or black beans, will only take one or two hours to cook. Larger beans, like kidneys and garbanzos, may take closer to three hours. The older the beans, the more they have dried out and the longer they will take to cook. Beans will also take more time to cook in hard water or when salt or tomato sauce is added to the pot before the beans are cooked.

This is a excerpt from Ecothrifty: Cheaper, Greener Choices for a Happier Healthier Life by Deborah Niemann.

Thrifty Homesteader is a participant in the Amazon Services LLC Associates Program, an affiliate advertising program designed to provide a means for sites to earn advertising fees by advertising and linking to amazon.com. You pay the same price when you purchase through affiliate links as you would if you went directly to Amazon, and our site earns a small commission, so by shopping through our links, you are helping to support our blog so that we can continue to provide you with free content.
219 shares
219 shares