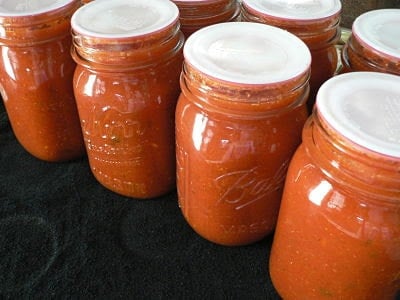 Like a lot of people, I was skeptical when I first read about Tattler reusable canning lids, but I’m quickly turning into a convert. We’ve used them now for pickles and pizza sauce, and they seem to be holding up well. Sixteen out of sixteen jars sealed so far. The plastic lids are food safe and do not contain BPA, which coats the inside of store-bought cans and disposable canning lids. Rather than having a skinny little seal as part of the lid, there are rubber rings that are separate from the lid.

They are used a little differently than the one-time-use lids. With the disposable lids, you are warned against tightening the rings after taking the jars out of the canner. The lid manufacturers are concerned that if you muscle down on the lid too much, you will press through the sealing compound on the lid and your jar won’t seal. That is not a problem with the reusable lids though because the seals are quite thick.

And the icing on the cake is that they are made in the U.S. and the lids have a lifetime guarantee.

Thrifty Homesteader is a participant in the Amazon Services LLC Associates Program, an affiliate advertising program designed to provide a means for sites to earn advertising fees by advertising and linking to amazon.com. You pay the same price when you purchase through affiliate links as you would if you went directly to Amazon, and our site earns a small commission, so by shopping through our links, you are helping to support our blog so that we can continue to provide you with free content.
27 shares
27 shares