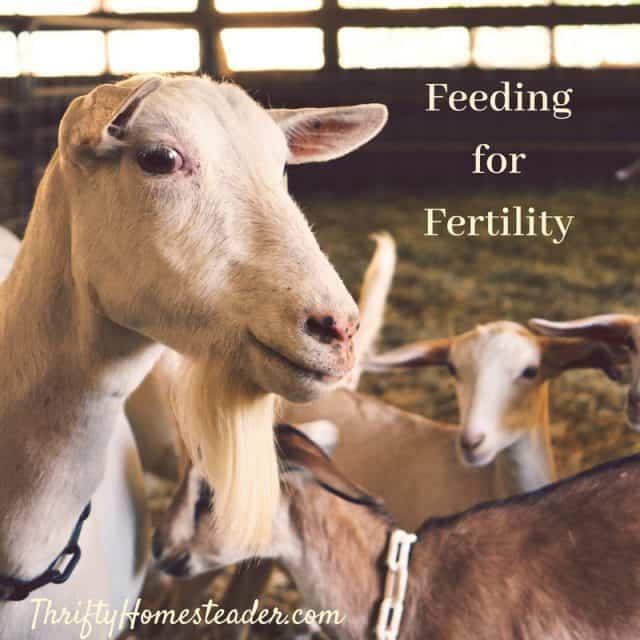 “Flushing” is the practice of feeding does more than usual for a month prior to breeding with the idea that it will increase their fertility. This is a very old practice, and the idea behind it is a good one. Of course, you want your doe to be in top condition prior to breeding. She is more likely to get pregnant and stay pregnant.

However, for most people, flushing translates as more grain, which is not the best thing for a ruminant. Flushing should not be necessary in a goat that is in good condition. Feeding more grain than her body needs will simply cause her to put on more weight, which is not good. Does should not be either underweight or overweight when bred.

This really boils down to the fact that excellent nutrition can help a goat to perform at the highest level possible, given its genetics. But nutrition can’t trump genetics and cause a goat to release more eggs than it is genetically programmed to release. For example, if you have a doe that consistently produces singles when her dam produced more, perhaps there is a problem with nutrition. But you can’t expect flushing to cause a goat to produce triplets or quads when her mother and grandmothers always produced twins. The majority of dairy goats produce twins, and feeding grain prior to breeding doesn’t increase that number.

I have never used flushing prior to breeding my goats, but I have seen firsthand that nutrition plays an important role in fertility and production. When we had a problem with copper deficiency, we had goats not coming into heat, not getting pregnant when bred, and not staying pregnant. However, once our copper deficiency problem was resolved, our fertility rate shot up considerably. In our Nigerian Dwarf goats, the average number of kids went from 2.5 per doe to 2.9 per doe with some years exceeding three kids per doe. If I include the does that aborted or didn’t get pregnant, the average was less than two kids per doe, and from an economic perspective, those does should be included because they are being fed for a year and are not producing kids or milk. Our two remaining LaManchas went from not getting pregnant at all to both having triplets.

The problem with the concept of flushing is that it puts an emphasis on nutrition during a single month. The goal needs to be optimal nutrition every month of the year. Even if I had been flushing my does during those years when we had a copper deficiency problem, it would not have eliminated the fertility problems that we were having. Although the problem was nutritional, the goats did not need more calories. They needed more copper.

The nutritional needs of bucks definitely increase during breeding season. Although most sources recommend bucks not be fed grain because of the risk of urinary calculi, you need to look at your bucks to determine whether to feed them grain or not. For years I was so worried about urinary calculi that I didn’t give my bucks grain, even though they would lose a lot of weight every year during breeding season. I talked to other breeders who lived in even colder climates than I do, and since they weren’t feeding grain, I didn’t think I needed to do it either. Then one day I saw one of those breeders at a goat show. Her hay was far superior to what I had been able to find at that time, which meant her bucks were getting a more nutrient-rich feed than mine, which explained why they were so much healthier than my bucks, even though none of her goats was eating grain.

Now I watch my goats. The feeding plan for my bucks changes from one year to the next depending on what their body condition looks like. If they start to lose too much weight, I give them grain. This usually correlates to the quality of the hay and how cold it gets, but their body condition also tends to be worse when they can see the does because they spend too much time fighting with each other and burning calories. In recent years I’ve kept my bucks where they can’t see the does, and they don’t spend as much time butting heads. I also buy grass hay pellets to supplement their diet, if the quality of our hay is not excellent. If you need to feed grain to your bucks on a regular basis, add ammonium chloride to their grain or minerals to prevent urinary calculi or feed a brand of goat feed or minerals that already includes ammonium chloride. 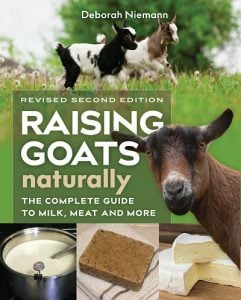 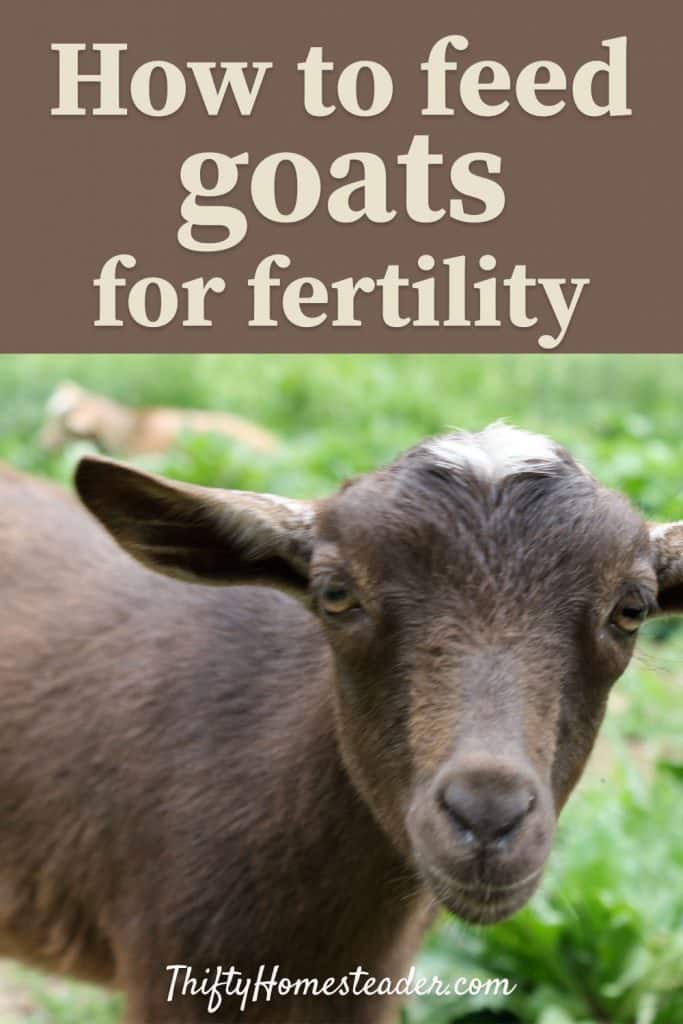 11 thoughts on “Feeding Goats for Fertility”

Thrifty Homesteader is a participant in the Amazon Services LLC Associates Program, an affiliate advertising program designed to provide a means for sites to earn advertising fees by advertising and linking to amazon.com. You pay the same price when you purchase through affiliate links as you would if you went directly to Amazon, and our site earns a small commission, so by shopping through our links, you are helping to support our blog so that we can continue to provide you with free content.
1385 shares
1385 shares