Does fear of failure stop you from trying to make cheese? If you’re afraid that you might do something wrong when making cheese, you’re right. At some point, you will make a mistake, and the cheese will be a total flop. It might be the first time or the 641st time that you make a cheese, but at some point, you will fail. So get over it!

The picture above is what happened to a batch of cheddar recently — and Mike has made at least 100 pounds of cheddar over the years. But that’s what happens when you fall asleep and don’t wake up for 90 minutes when the cheese was supposed to be resting for only 30 minutes. I suppose I have to take some of the blame. After all, he was counting on my internal clock to wake me up in 20-30 minutes, as it usually does when I take a nap in the afternoon. Of all the times for that internal clock to fail! But as I always say when things like that happen — it’s a good day to be a pig! They didn’t mind at all that the cheese didn’t knit! There wasn’t anything wrong with the batch from a safety perspective, but when the curds don’t stick together, there is tons of air between the curds, which would have likely resulted in crazy mold growth veining through the cheese during aging — and we’re not talking about good mold here. 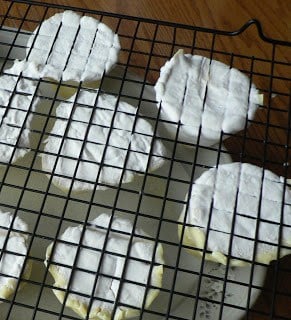 And this is what happened the first time I tried to make a mold-ripened cheese several years ago. I thought I could use a cookie cooling rack instead of a proper cheese mat. To make matters worse, I also forgot to turn the cheese daily, and the mold wrapped around the cooling rack. When I tried to pull the cheese off the rack, it ripped apart.

But I always say that I have learned far more from my mistakes than any books I’ve read or classes I’ve taken. Having those cheddar curds sit for 90 minutes instead of 30 minutes, we learned first hand how fast curds release their whey. So, remember to always use a timer when making cheese.

A timer is a cheesemaker’s best friend!