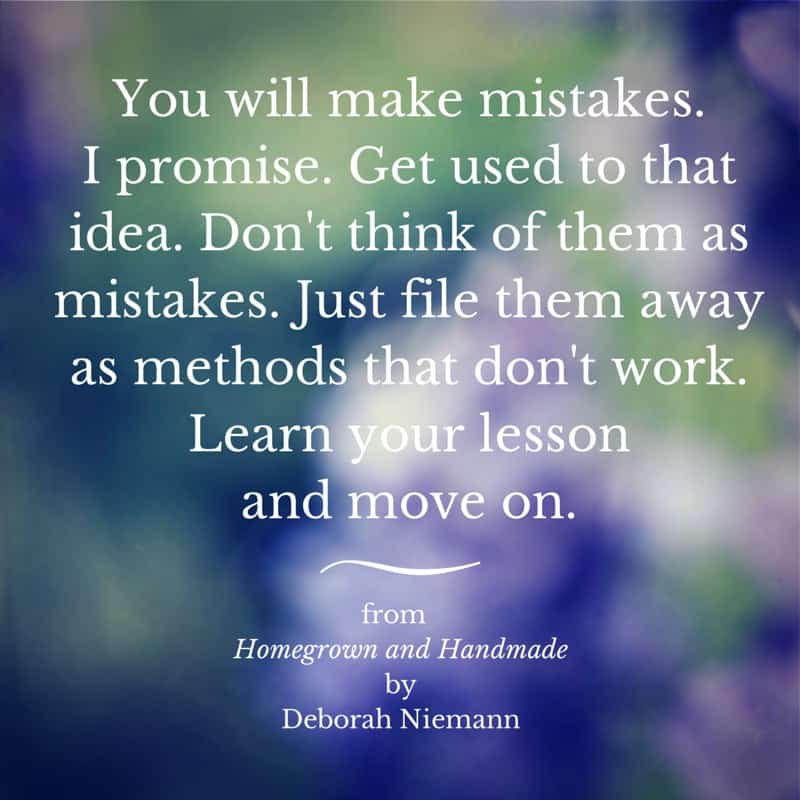 Whether you are raising goats, knitting a scarf, or making a homemade pizza, you will find that you learn a lot more from your mistakes than from any book or article. True learning is in the doing. Unfortunately, fear of making mistakes holds back a lot of people from going after their dreams!

When we first moved out to the country in 2002, a lot of my friends asked if I’d grown up on a farm. When I said “no,” they asked, “Well, how will you know what to do?” I told them I was reading books, and I was met with skepticism or silence.

A few brave souls asked, “What if you make a mistake?” I have to admit that I really didn’t think we would make many mistakes, and it never occurred to me that they could be tragic.

We had been on the farm for two years when one of our goats died. We were devastated. How could that happen? I’d taken it to a local vet a week earlier, and then it actually died at the university vet clinic. They said it died from a heavy wormload. A few months later, two more goats died.

If you’ve read Homegrown and Handmade or Raising Goats Naturally, you know that those deaths were just the beginning of several years of fertility problems and untimely deaths. But I wasn’t about to give up, and because of those challenges, I did lots of research and ultimately learned far more about goats than I would have if everything had gone smoothly.

When working with living creatures, we have to appreciate that every one of them is unique, so there will always be more to learn. But what about something like knitting or cooking? As I said earlier, true learning is in the doing. You can read about how to do something for years, but until you actually do it, you don’t really know how to do it.

And of course, nothing is perfect the first time you do it. My first scarf had lots of dropped stitches, and my first pizza had a soggy crust. I didn’t particularly like either one, but I was determined to try again. With practice, I dropped fewer stitches when knitting. Through trial and error, I learned what temperature worked best in my oven and for how many minutes. 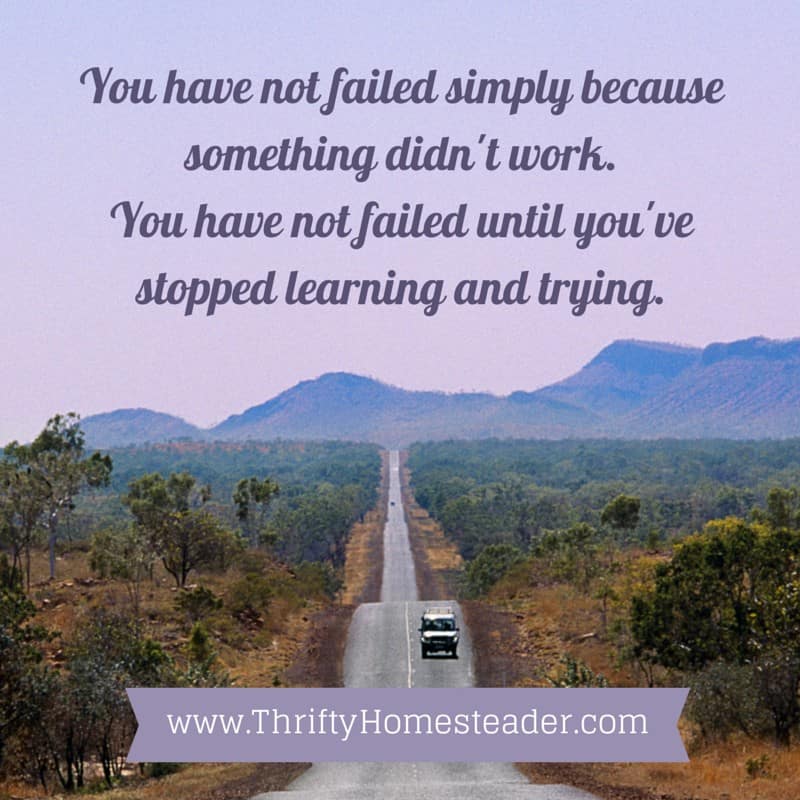 People tell me they’re inspired by what my family has accomplished on our homestead, and although I’m happy to hear that people are inspired, I want everyone to appreciate the value of mistakes we’ve made along the way. Whether you are at the beginning of your journey towards greater self-reliance or you’ve been at it a few years, you’ll make mistakes. So will we. Ultimately it is not mistakes that scare people. It’s fear of failure.

When people used to ask me if we were afraid of making mistakes, what they really meant was, were we afraid of failing. What would we do if we completely and utterly failed? In spite of all the mistakes we have made, we have not failed. We’re still here, still trying, and have actually succeeded in learning to do lots of things.

5 thoughts on “Mistakes do not mean failure”

Thrifty Homesteader is a participant in the Amazon Services LLC Associates Program, an affiliate advertising program designed to provide a means for sites to earn advertising fees by advertising and linking to amazon.com. You pay the same price when you purchase through affiliate links as you would if you went directly to Amazon, and our site earns a small commission, so by shopping through our links, you are helping to support our blog so that we can continue to provide you with free content.
246 shares
246 shares