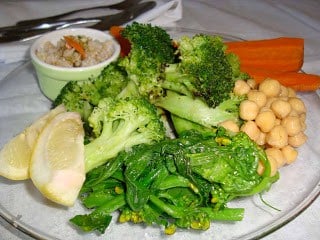 What’s for dinner? Broccoli! Okay, that sounds silly. None of us would eat just one type of vegetable for our main meal of the day. Yet when asked what they’re having for dinner people often respond: “chicken.” Or “pork chops.” Or “shrimp.”

The idea that meat or seafood should be the center of our diets is so powerful that many people now describe their entire meals with just one word. “We’re having steak for dinner.”

That’s not really all they’ll eat. In most households, family members will add a little potato or salad, or a few forkfuls of green vegetables. But those are mere ‘side dishes.’

Yet there’s a global movement promoting a different idea that has large benefits for the environment and health. It’s the simple but radical idea that we start making plant foods the center of our meals. There are countless reasons to do so, as outlined in my new book High Steaks: Why and How to Eat Less Meat, being released by New Society Publishers in early fall of 2012.

The average Canadian and American eats more than half a pound of meat each day, and at least 200 pounds per person per year. That’s an increase of roughly 50% in the past half-century, and an even greater percentage increase in the past 100 years. It’s more than most of our distant ancestors ate, and it’s at least three times the amount of meat eaten by average citizens in the developing world.

So what’s the problem? Unfortunately for sustainability, animal-source foods use a lot of land (for pasture and feed production) and a lot of fresh water; large-scale intensive production uses most of our antibiotics, and indirectly huge amounts of fertilizers and other chemicals; and thousands of animals in small spaces produce an amount of manure beyond what can serve as useful fertilizer, which therefore ends up polluting our water. There are other strong reasons that large-scale livestock production just can’t be maintained at current levels and current methods, and those reasons are rigorously documented and summarized in the book.

Unfortunately for health, scientists and nutritionists say we’re now consuming so much in the way of animal fats and proteins, that it’s making us more vulnerable to obesity, heart disease and other ailments.

But any of us can act immediately to cut back on animal products. Without necessarily becoming vegetarian, you can decide to consider more of your meals veggie ones. You can join myself and others in a new trend — to describe the entire dinner using the name of your favourite vegetable. At our home this evening we’ll be having rice pilaf, steamed carrots and leafy greens, marinated chick peas, and in the centre of the plate sautéed broccoli with a little olive oil, salt and lemon. Dinner tonight will be “broccoli.”

Sources are extensively outlined in Eleanor’s upcoming book. Statistics above are also supported by the World Health Organization, and by G. Stone (ed.) Forks Over Knives: The Plant-based Way to Health, 2011. NY: The Experiment.

Eleanor Boyle, PhD is a writer, educator, and author of
High Steaks: Why and How to Eat Less Meat. (New Society Publishers, 2012.) You can visit her online at her blog.

1 thought on “Tonight’s dinner is … broccoli”