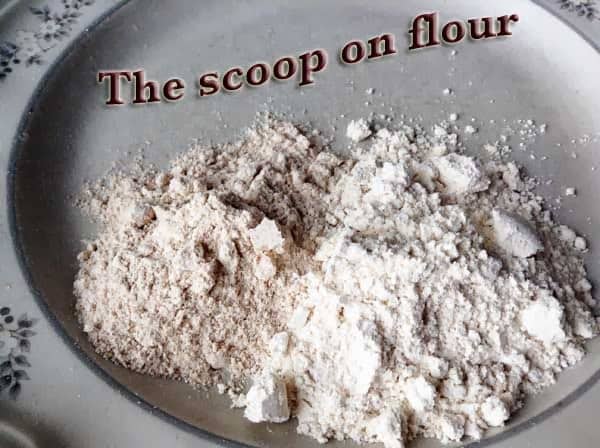 Whenever I teach a class and mention flour, a hand immediately goes up, and someone asks, “What kind of flour?” Good question! Sometimes it matters, but sometimes it doesn’t. However, the reason the question is asked is because most people don’t know what makes one flour different from another. Once you have the scoop on flour, you won’t be tied to using what the recipe suggests. Because the vast majority of recipes call for a type of wheat flour, we’ll limit the discussion in this post to the many varieties of flour made from wheat.

All-purpose flour — This flour is usually bleached. It is really a marketing phrase, rather than a type of flour, which means that you need to read more of the label to decide if you really want to buy it. It is called all-purpose because the manufacturer is suggesting that you can use it for cakes, breads, pie crusts, or pretty much anything that calls for flour. There are also gluten-free flours that contain no wheat, but again, you have to read the label more carefully to determine that.

Bleached flour — Wheat flour is not naturally snow white, and I don’t really understand why anyone ever decided that it needed to be. I quit using bleached flour more than 20 years ago when I actually thought about what the label said — BLEACHED! Do you want to eat food that has been bleached? The other thing about bleached flour is that it has also been stripped of the wheat germ and the bran, making it completely nutritionally void of anything, which is why it is then fortified with vitamins and minerals.

Unbleached flour — This simply means that the flour has not been bleached, so it maintains its natural color. It also means there is no risk of residual bleaching chemicals. In many cases, it also means that there is no bran or germ left; however, King Arthur has a white whole wheat that they label as “unbleached” to avoid confusing consumers about the “white” wheat. (More on that in a minute!)

Whole wheat flour (pictured above, left) — This type of flour has not been bleached, and it is legally supposed to have its germ and bran. In most cases, it comes from the red wheat plant, which means it is darker in color and has a nutty flavor. When used in baking, it won’t rise as high as flour that has no germ or bran. It makes a very heavy loaf of bread, so some people prefer to use only 50% whole wheat and 50% unbleached for a lighter loaf. I prefer to use 100% red whole wheat for any cake, crisp, or bread that includes cinnamon because the spice really complements the nutty flavor of the wheat.

White whole wheat flour (pictured above, right) — There is red wheat, and there is white wheat, and they make very different flours. If you have family members who don’t like “whole wheat,” try white whole wheat. It is lighter in color and lighter weight, which means it rises better than the red wheat flour. It also has a milder flavor than the traditional red whole wheat. We use this type of flour to make tortillas, bread, cakes, and almost everything, making it our family’s “all-purpose flour.” This is sometimes labeled as pastry flour because it is traditionally used for cakes, muffins, cookies, and other yeast-free delicacies, but we use it for yeast breads and love it!

Bread flour — Can be bleached or unbleached and generally has more protein (gluten) so that it creates a lighter, airier loaf of yeast bread.

Rye, oat, soy, and other flours — For centuries, most baking has been done with wheat flours because it has gluten, which gives a light and airy feel to the breads, cakes, and other foods that are made with it. You can usually substitute one-third to two-thirds of another type of flour in most recipes if you want to try something a little different, or if you happen to run short of your wheat flour when you are in the midst of mixing up a recipe. Using one-third rye or oat flour in a bread recipe is especially delicious. Keep in mind that if you substitute a gluten-free flour such as soy flour for a wheat flour, anything with leavening won’t rise as much as if you had used all flours that contain gluten.

Corn meal, almond meal, and other meals — Meal is not the same thing as flour and cannot usually be subbed in recipes. Meals are ground far more coarsely than flours and the finished food product will be quite grainy and crumbly when you substitute a meal for a flour.

If you or a loved one is gluten intolerant, that’s an entirely different topic. Stay tuned, and we’ll be discussing gluten-free options soon!

This post shared on the Backyard Farming blog hop.

1 thought on “The scoop on flour”

Thrifty Homesteader is a participant in the Amazon Services LLC Associates Program, an affiliate advertising program designed to provide a means for sites to earn advertising fees by advertising and linking to amazon.com. You pay the same price when you purchase through affiliate links as you would if you went directly to Amazon, and our site earns a small commission, so by shopping through our links, you are helping to support our blog so that we can continue to provide you with free content.
101 shares
101 shares