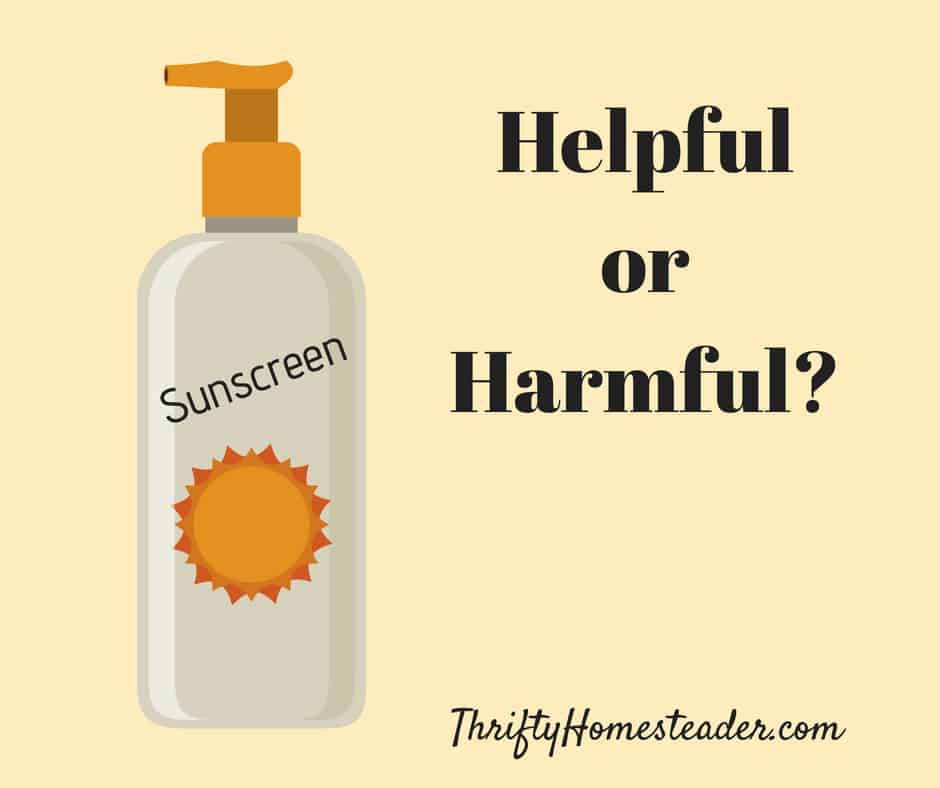 Those of us living on farms and growing even some our own foods cannot help but spend a fair amount of time outside. That inevitably brings up the topic of sun exposure. And that brings up skin cancer. As the wife of a man who has survived melanoma, as well we more basal cell carcinomas, squamous cell carcinomas, and dysplastic nevi that I can remember at this point, I cringe when I hear someone say that sunscreen causes cancer. That’s like saying that water kills people, which it can. But there’s a huge difference between drinking water every day and drowning. And there is a big difference between the various sunscreens on the market, as well as how they are used.

Does sunscreen cause cancer?

Although there are plenty of people who claim that some of the chemicals in sunscreen are carcinogenic, I have not been able to find any convincing evidence that it actually causes cancer in humans. Nanoparticles of zinc oxide are thought to be carcinogenic if inhaled, but some sunscreens use non-nano zinc oxide, so you need to know whether the specific product has one or the other — and only spray-on sunscreens would really have the risk of inhalation. Some also worry that the nanoparticles may be absorbed into the skin, which would be another reason to look for products that specifically state that they use non-nano zinc oxide.

Does sunscreen affect your hormone production?

There is plenty of evidence that sunscreen chemicals are endocrine disruptors in humans. In other words, they mess with your hormone production, which includes things like thyroid, estrogen, testosterone, insulin, progesterone, and so on. Oxybenzone is a popular sunscreen chemical, and it is considered unsafe by the Environmental Working Group’s Skin Deep Cosmetics Database. It has been shown to be an endocrine disruptor in humans, according to the European Commission on Endocrine Disruption and several published studies. Octinoxate is also an endocrine disruptor. Both of these chemicals are also shown to cause changes on the cellular level, which is what may cause some people to assume they are carcinogenic. Both chemicals also accumulate in the human body. According to the CDC, oxybenzone is found in the bodies of 97% of Americans. Octinoxate has been found in mother’s milk. These chemicals are also bad for the environment as they have been shown to kill coral reefs.

The vast majority of sunscreens contain “fragrance,” which is a proprietary blend of unknown chemicals that can be carcinogenic and disrupt hormones and have other harmful effects. Do not be fooled by any that put “made with essential oils” on the front label. Look for the word “fragrance” on the ingredient list. They can label it as “made with essential oils,” if they simply add a couple drops of essential oil, but the majority of that “fragrance” is probably cheaper synthetic fragrances that are actually illegal to use in many other countries because of the known negative health effects.

How safe is your sunscreen?

If you have sunscreen in your house right now, grab it and check the ingredient list. If it contains oxybenzone or octinoxate, it is definitely time to look for a safer product, especially if you are using it on your children because hormone disruption is especially problematic in children. However, those two chemicals are only the beginning. You can look up many specific brands on the EWG’s Guide to Sunscreens, and if they don’t have your specific brand, you can look up individual ingredients in EWG’s Skin Deep Cosmetics Database.

13 thoughts on “Sunscreen: Helpful or Harmful?”

Thrifty Homesteader is a participant in the Amazon Services LLC Associates Program, an affiliate advertising program designed to provide a means for sites to earn advertising fees by advertising and linking to amazon.com. You pay the same price when you purchase through affiliate links as you would if you went directly to Amazon, and our site earns a small commission, so by shopping through our links, you are helping to support our blog so that we can continue to provide you with free content.
70 shares
70 shares