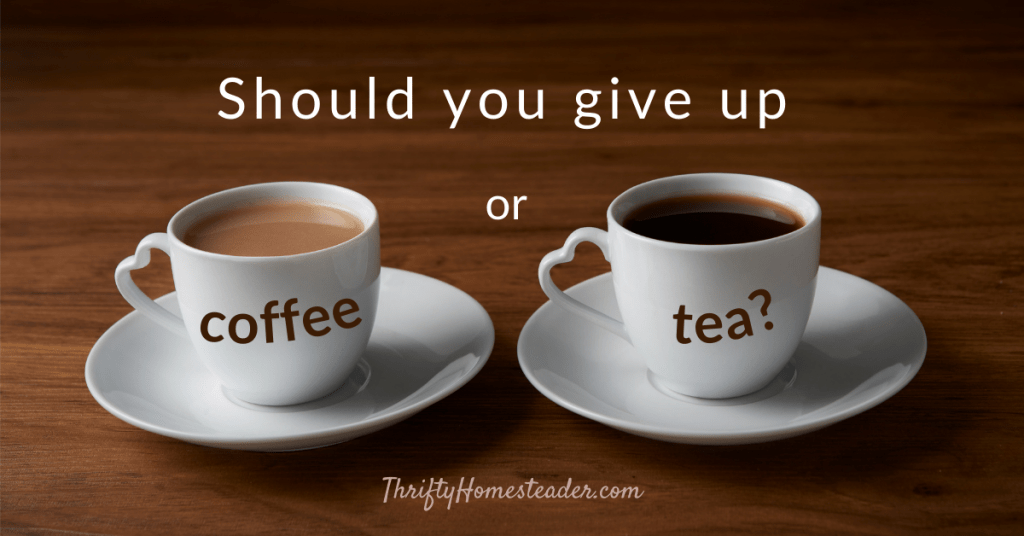 With January just a few days away, some people are probably starting to think about resolutions for the new year. I write about food quite a bit, but what you drink can be equally important. If you’ve been thinking about reducing or eliminating your coffee or tea drinking, you might find today’s post helpful.

Various studies have found that coffee drinkers have lower rates of some cancers, heart disease, Altzheimer’s, Parkinson’s, gallstones, diabetes, liver disease, and gout. You may have heard that there is a correlation between drinking coffee and increased risk of some cancers, gastrointestinal diseases, sleep problems, increased cholesterol, high blood pressure, heart disease, anemia, and problems with pregnancy. Why the disparity?

In many cases, the negative side effects were found in people who consumed large amounts of coffee, which simply confirms the admonition that all good things should be consumed in moderation, but it is more complex than that.

“Often people think of coffee just as a vehicle for caffeine. But it’s actually a very complex beverage with hundreds and hundreds of different compounds in it. Since coffee contains so many different compounds, drinking coffee can lead to very diverse health outcomes. It can be good for some things and bad for some things, and that’s not necessarily flip-flopping or inconsistent,” said Dr. Rob van Dam, Assistant Professor in the Department of Nutrition, Harvard School of Public Health.

Statistically, many people who drink coffee also smoke and are less likely to eat a healthy diet or exercise, so in earlier studies, coffee was often blamed for negative health outcomes that have now been linked to other lifestyle choices. More current studies, such as the one Dr. van Dam conducted with 130,000 volunteers, control for other lifestyle choices when looking at the data. There is still not definitive evidence on whether or not coffee is harmful to an unborn baby whose mother drinks coffee, so pregnant women should limit coffee drinking to one cup a day or less.

Another point to consider when consuming coffee is that the usual process for decaffeinating uses chemicals. There is a decaffeinating process that uses water, but unless the label claims that process has been used, the chemical process was probably the method employed.

Although humans have only been drinking coffee for a few hundred years, the history of tea goes back for thousands. Any herb or plant that has been soaked in hot water is called tea (although herbal infusions are technically tisanes), and every one of those plants has different health benefits and risks. Black tea, which comes from the same plant as green, oolong, and white tea, has been used medicinally for millenia.

Today, studies have documented a long list of health benefits from tea drinking, including reduced risk of cancer, diabetes, inflammatory bowel disease, heart disease, and even depression. It also helps the immune system to function better and reduces the body’s production of stress hormones.

Because coffee and black tea must be transported a long distance to reach North America, they are not as ecothrifty as drinking tap water. However, drinking tea and coffee are better for the environment than drinking soft drinks or bottled water because the amount of waste is minimal – the box or can in which the dry tea or coffee was purchased, which is small compared to the amount of tea or coffee that can be prepared from the dry tea leaves or coffee beans. If you have a habit of buying a cup of coffee or tea at a shop in the morning, you can buy a travel mug and make it at home. If you only want one cup, you can buy a coffeemaker that brews coffee in single servings.

Thrifty Homesteader is a participant in the Amazon Services LLC Associates Program, an affiliate advertising program designed to provide a means for sites to earn advertising fees by advertising and linking to amazon.com. You pay the same price when you purchase through affiliate links as you would if you went directly to Amazon, and our site earns a small commission, so by shopping through our links, you are helping to support our blog so that we can continue to provide you with free content.
102 shares
102 shares