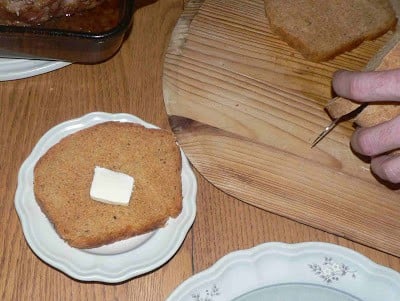 Who would have thought that I would need more than 80,000 words to say everything I wanted to say about growing your own food and fiber? That’s the length of the book, and unfortunately, I ran out of space. But I didn’t know I was running out of space until I ran out of words and still had more to say! So, some of the stuff in the middle had to get cut to leave enough space at the end to write about fiber. One of the things that we decided to cut was my recipe for multi-grain bread. The good news is that you still get the recipe, because I’m putting it on here — as well as all the other stuff that we decided didn’t have to be in the book. So, over the next few months, I’ll be posting recipes and other information that we couldn’t squeeze into the book.

What’s the big deal about this recipe? Multigrain breads can be a little dense, but whey is a natural dough conditioner, which means you can use leftover whey from cheesemaking to make a lighter multigrain bread. The other thing that makes whole grain breads lighter is allowing the dough to rise multiple times.

Put all of the ingredients in a large bowl, using only 3 cups of the unbleached bread flour and begin to stir with a large spoon. If you have a stand mixer with a dough hook, you can put all of the ingredients in, turn it on low, and let it work for you while you chop up vegetables or do something else nearby. Check on it after a couple minutes and add another quarter cup of flour if the dough is still sticking to the sides of the bowl. If you are stirring with a spoon, you will probably have to switch to using your hands when it becomes too difficult to continue using the spoon. Continue to add flour in increments of 2 tablespoons every couple minutes if the dough is still sticky. When in doubt, turn off the mixer and touch the dough with your fingers. If it does not stick to your fingers, it is ready. The nice thing about doing it by hand is that it is easier for beginners to know when the correct amount of flour is properly mixed in, because the dough no longer sticks to your hands. Leave it in the mixing bowl, covered with a damp towel, and let rise for an hour or two. If you have time, punch it down after two hours, and let it rise for another two hours. The extra rise will make a lighter loaf of bread. If you don’t have time to let it rise twice, don’t get stressed. It will be delicious with one rise, but it will be slightly denser.

This recipe makes two loaves or two dozen rolls. I like to make both loaves one day, use one for dinner and use the other for French toast the next morning for breakfast. Whatever you plan to do, you need to split the dough in half after the second rise. Roll each ball of dough between your hands until it is the length of your loaf pan, which has been oiled or buttered so that your bread doesn’t stick. Put the dough into the loaf pan. After rising for about 45 minutes in a warm kitchen (or up to 90 minutes in a colder kitchen), bake at 350 degrees for 35 to 40 minutes.

If you want to bake one loaf later, you can refrigerate it, covered, for up to a week. Keep in mind that if you refrigerate it, it will acquire a sourdough taste after a day or two, and the taste will grow stronger every day. About two hours before you are ready to bake it, take it out of the refrigerator and let it come to room temperature. I don’t like to punch down whole grain breads after they have been in the refrigerator, because they seem to have trouble rising again, which is why I like to refrigerate them in the pan in which they will be baked.

Thrifty Homesteader is a participant in the Amazon Services LLC Associates Program, an affiliate advertising program designed to provide a means for sites to earn advertising fees by advertising and linking to amazon.com. You pay the same price when you purchase through affiliate links as you would if you went directly to Amazon, and our site earns a small commission, so by shopping through our links, you are helping to support our blog so that we can continue to provide you with free content.
198 shares
198 shares