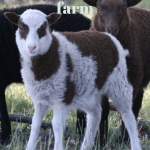 If you raise cattle, pigs, sheep, and other four-legged animals, how can you sell meat? You have two basic options.

You can have your meat processed and then sell individual cuts, either wholesale or retail, which means you are selling meat.

Or you can sell the whole animal to one person (or two) and deliver that animal to the locker for processing. In that situation, you are technically selling an animal, rather than meat.

Want to make money doing what you love on your homestead?
Check out my “Homegrown Businesses” course

If you sell individual cuts, you have to have a license in most places. You will also have to have freezer space for holding all of that meat, and it shouldn’t be your own personal freezer.

A commercial freezer that has a temperature read-out on the outside is best, which is pricey, but at a minimum, you need a thermometer in it, and you should keep a temperature log that shows that the meat is always below zero degrees Fahrenheit. Even if no one is checking this, it’s for your own protection in case anyone ever gets sick.

It’s a good idea to have an on-farm store so that you can have regular hours and won’t have customers walking through your house. One of the biggest disadvantages of selling individual cuts is that you have to find a lot of customers, and most will only buy a few cuts and come back regularly as they do in the supermarket.

If you sell the whole animal and deliver it to the locker for processing, you only need to find one customer for each animal.

Sometimes two people will split a beef. While it’s true that not that many people want to buy a whole animal, you don’t need to find that many customers.

If you only have two or three extra lambs, for example, you only need to find two or three customers, rather than a dozen or more, if you were selling individual cuts of meat.

The customer pays you for the animal, and they pay the locker for the processing. They can have the animal cut up, ground up, cut into stew meat, made into sausage, or whatever else they want. They only pay for exactly what they want.

For example, if they don’t want any hamburger patties or sausage, then they wouldn’t have to pay for that service. If they don’t like shoulder roasts, they can have that part of the animal made into ground or stew meat.

You may sometimes have a person contact you who wants to buy the live animal and pick it up from your farm and butcher it themselves.

Personally I don’t feel comfortable doing this because I don’t know about their skill level and whether they even care about ending an animal’s life humanely. I’ve heard some pretty brutal stories about live animals being hog tied and thrown into the trunk of a car, or being butchered by complete newbies whose lack of experience meant a very unpleasant end for the animal.

You can make more money per animal if you sell meat by the cut. For example, lamb chops can sell for $15 to $20 per pound, whereas a whole lamb sells for $6 to $10 per pound hanging weight.

Keep in mind that some of the “hanging weight” will wind up in the garbage, such as bones, unless you ask for them, so not every pound of hanging weight is edible.

You also have more expenses with your on-farm store, freezers, and electricity. If you only have a few animals to sell each year, ultimately you would make more money if you sell them as whole animals.

I once heard someone at a conference say that you should not be selling individual cuts unless you had at least 100 animals per year to sell. I think that’s high, but I wouldn’t even think about an on-farm store until I was processing at least ten head of cattle or twenty smaller animals, such as pigs or sheep, annually.

Your expenses will vary based upon whether or not you already have a building that can be used as a farm store or how you want to build it. Ultimately you need to do the math to figure out which one will be more profitable in your situation.

Because rules can vary from state to state (and obviously country to country), you should check with your state Department of Agriculture and Department of Health to see what the specific rules are in your area.

The rules and options for selling poultry are entirely different, and I’ll talk about that next week.

26 thoughts on “2 ways to sell meat from your farm”

Thrifty Homesteader is a participant in the Amazon Services LLC Associates Program, an affiliate advertising program designed to provide a means for sites to earn advertising fees by advertising and linking to amazon.com. You pay the same price when you purchase through affiliate links as you would if you went directly to Amazon, and our site earns a small commission, so by shopping through our links, you are helping to support our blog so that we can continue to provide you with free content.
322 shares
322 shares