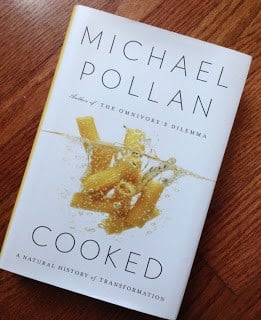 Reading Michael Pollan’s latest book, Cooked: A Natural History of Transformation, I kept thinking, I can see why his books are so popular. He tells you everything you ever wanted to know about food — and lots of things you didn’t know you needed to know. He asks questions that I never thought to ask seriously.

I have often wondered how red wheat could have become the standard “whole wheat” that is sold in the store when so few people like it. Yet almost everyone loves white wheat. If you’re a fan of Triscuits and wonder how they make “100% whole wheat” taste so good, it’s because they use soft white wheat, not the strong-tasting hard red wheat that is commonly sold today. I should have known that the popularity of red wheat had nothing to do with taste and everything to do with the industrial food machine. As white bread became more popular, millers wanted to buy a type of wheat that would work best for separating the wheat and bran — and farmers complied by growing hard red wheat almost exclusively. Pollan explains:

The wheat plant changed, too. The new roller mills worked best with hard-kerneled red wheat; the big tough bran coat on this type of wheat could be sheared cleanly and completely from the endosperm, whereas softer white wheat left infinitesimal specks of bran in the flour. So, over time, breeding changed the plant to better suit the new machine. But because hard wheat has tougher, bitterer bran, it made whole-grain flour even coarser and bitterer than it had been before — one of several ways that the triumph of white flour made whole wheat less good.

And so goes the whole book.  Every few pages, I’d exclaim, “Wow!” or “Oh, that’s why that happened!” The book is divided into four parts, each of which represents a way to cook — with fire, water, air, and earth. Pollan logically starts the book with a section on cooking over fire because that’s how humans started cooking. He visits barbecue pit masters to learn the history of barbecue and realizes how he has been misusing the word “barbecue” when he was actually grilling. True barbecuing involved cooking over wood coals for many hours to bring out the natural delicious taste of the meat. Some of the pit masters that Pollan interviews use the word “sauce” as if it were a four-letter word. Good barbecue, they argue, should not have to rely on sauce to taste good.

The second section is on cooking with water, which is when cooking became more civilized, moving indoors, using pots, and more often than not, being done by women. Pollan received lessons from a chef and shares what he learns about how to cook great meals on the stove. Samin Nosrat the chef confirmed what I have always thought must be true — there is no such thing as a bad cut of meat, simply bad ways to cook it. Throughout this section, I picked up a lot of tips on how to cook some of those less desirable cuts of meat, and again I learned a lot about the history behind what we’re doing in the kitchen. One tip — heavily salting a cut of meat 24 hours before cooking will make it more tender. If you can’t salt it 24 hours ahead of time, it’s usually better to just not salt it before cooking.

The third section — air — is about baking bread. Although I used to make sourdough bread some 20 years ago, I have been using yeast now, while continually telling myself that I’d get back to sourdough someday. Well, Pollan’s book made someday, today. I now have a sourdough culture growing in my kitchen again for the first time in two decades. This is the section where we learn all about the history of wheat and wheat farming and industrialization of wheat and how it went from being part of a healthy diet to being a big part of an unhealthy diet.

The final section is on fermentation, and Pollan covers fermented vegetables, cheese, and beer. Being a cheese maker myself, I loved reading about the time that Pollan spent with Sister Noella, the Cheese Nun, who also happens to be a microbiologist. Raw milk fans will love hearing about Sister Noella’s experiment with her raw cheese.

I was happy to learn in the afterword that Pollan continued baking bread and cooking from scratch when he was finished researching the book. I got the feeling that he was only learning these things for the purpose of writing the book, but ultimately he decided that some cooking activities were actually fun and easier to do that he had expected. I have long argued that most people who say they don’t have time to cook don’t actually know how to cook. Dinner does not have to be a Top Chef production, and there are many benefits of home cooking far beyond the nutritional.