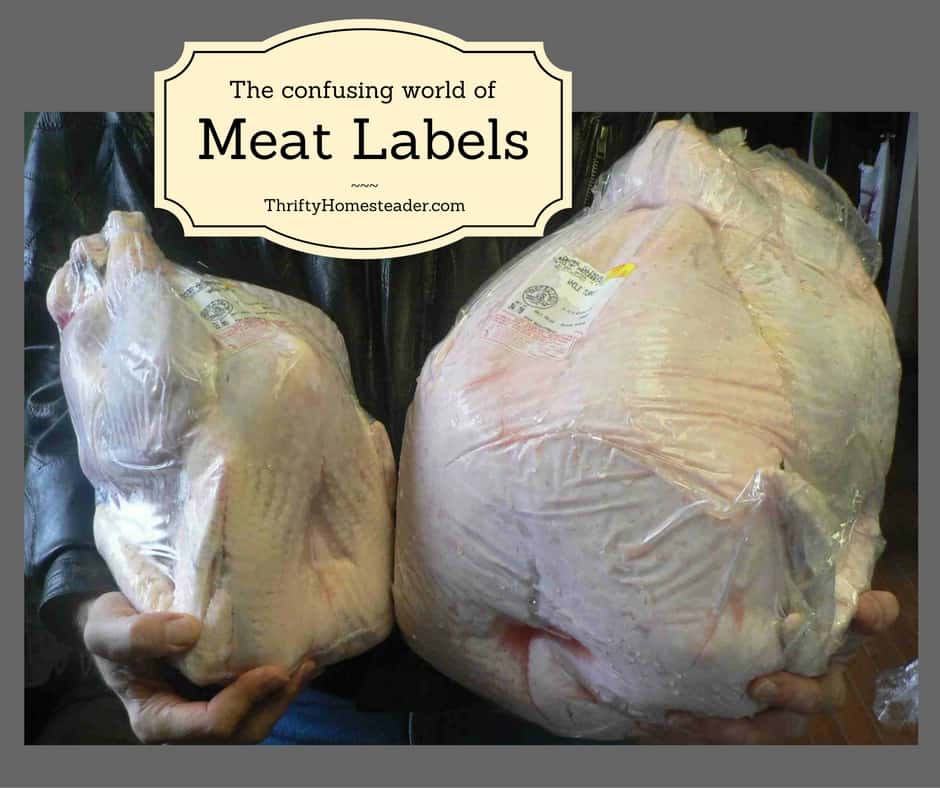 If you don’t grow 100% of your own meat like we do, then how do you know what meat is the best? What does grass-fed beef mean? What about pastured pork? What is free-range chicken? What do meat labels mean?

The first thing you need to know about labels is that anyone can put almost anything on a label. “Organic” is about the only word that has governmental regulations behind it. If a label simply says grass-fed, pastured, free-range, humanely raised, or anything else, it means nothing legally unless there is a certifying agency behind it. Then it’s only worth as much as that certifying agency makes it worth. In other words, some have much lower standards than others.

Ideally, everyone could buy their meat from local farmers or ranchers they know personally. If you visit the farm and talk to the producer, it becomes obvious fairly quickly whether they are actually walking the walk. Personally I have not met anyone who claimed to have raised animals differently than what they honestly did. I’m not saying there aren’t any dishonest people out there, but most are proud of how they raise their animals. Those who raise cattle on grain will proudly tell you that corn-fed beef is the best in the world. I’m sure they believe that. They simply don’t know that grassfed is healthier for the cattle, the environment, and the people who eat the beef. And you don’t have to sacrifice taste for all that quality. 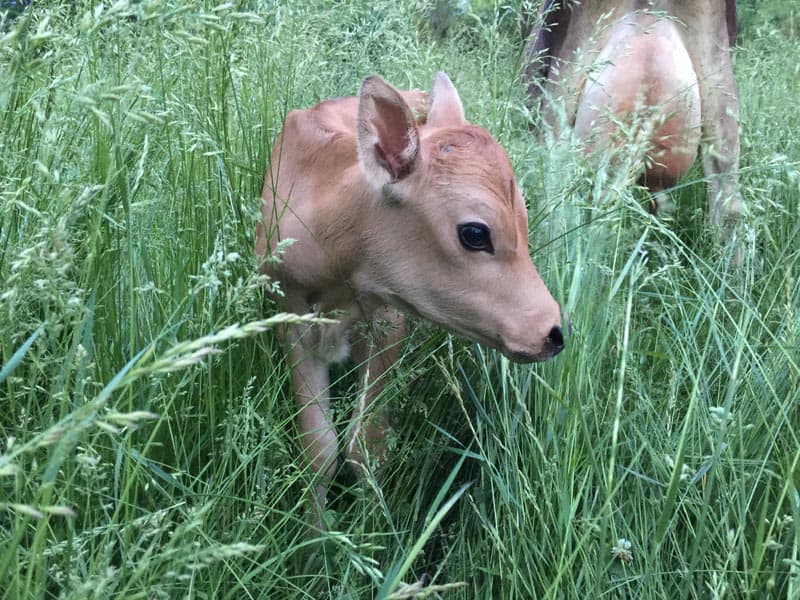 Some conventional ranchers have actually worked to make this meat label worthless for their own benefit. They have correctly pointed out that all cattle are grass-fed. However, they fail to tell the whole story. All beef calves are born on pasture and spend the first six months or so of their life on pasture. However, conventionally raised beef calves are then weaned and sent off to feedlots to be finished on grain. They are fed so much grain that they also have to be fed baking soda and antibiotics, or they would die from rumen troubles. In nature, cattle would never eat concentrated amounts of grain, which is basically various types of seed. Eating soybeans right out of a field would kill them, so soybeans have to be roasted. All the way around, it’s a very unnatural feeding method. But it makes the calves grow faster so they can be finished in half the time it takes to get the same weight on them feeding only grass and hay. Sheep can also be grassfed, but are also grain finished in conventional systems.

If you purchase meat that is certified through the American Grassfed Association, that means the animals “have eaten nothing but grass and forage from weaning to harvest, have not been raised in confinement, and have never been fed antibiotics or growth hormones. In addition, all AGA-Certified Producers are American family farms and their livestock is born and raised in the U.S.”

Animals can also be certified grassfed by Animal Welfare Approved if they already meet AWA’s other standards for humanely raising their livestock, which I’ll discuss shortly. 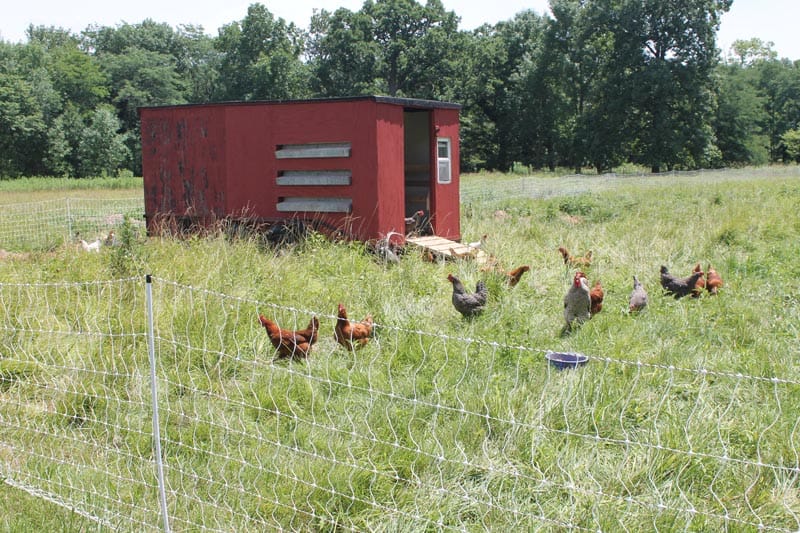 These are terms you see on meat labels for pork and poultry. Pastured means that the animals live on pasture and are fed supplemental feeds, usually grain based. Pigs and chickens cannot be entirely grassfed because they’re omnivores. In addition to naturally eating grains and seeds, they also eat meat. Chickens eat insects, as well as mice, frogs, or anything else small enough and slow enough for them to catch. Pigs may also eat any animal that they can catch. However, killing a chicken is a capital offense for pigs on our farm. Although some of our Tamworths killed and ate chickens, none of our guinea hogs have ever done that.

Again, the conventional producers proudly explain that they keep their animals inside for various reasons that are always for the animals’ own good. I heard a confinement poultry producer say that if chickens were outside, they’d all be eaten by coyotes. Yes, every last one! I guess he’s never heard of fencing. I read a blog written by a woman who visited a confinement pig operation in Illinois and was told that pigs can’t live outside in Illinois because it’s too cold. There are two problems with that. First, it’s only cold about four or five months a year. Second, pigs have a thick layer of fat that insulates them from the cold, so they do just fine outside in Illinois in the winter. I guess they never heard about the feral hog problem in Michigan, which is even colder than Illinois.

When reading labels, you can ignore the phrase “access to outdoors” or “outdoor access.” That basically means there is a small door in the building where the animals could theoretically go out. However, because the building is so huge, and there are so many animals in it, most never do. These are phrases used by conventional producers who simply want to make a little more money on their meat without actually changing anything. They don’t want to lie. But they will choose their words very carefully.

Certified Humane and Animal Welfare Approved are two certifications that address where animals live. They require that animals be kept outside during the day except during inclement weather. They also have additional requirements related to animal welfare. All farms are inspected annually to be sure they are adhering to the rules. The certifying organizations may also conduct surprise inspections. Rules for the two programs vary, and AWA’s program has the strictest rules. For example, they require farmers raise breeds of poultry that have not been bred for rapid weight gain, which is detrimental to their health and welfare.

But here is where it gets confusing. American Humane Certified is essentially worthless because it does not even require the meaningless “access to outdoors” for meat animals. They even allow beak trimming in meat birds, which is not even a common practice. (Meat birds don’t usually live long enough to get aggressive.) Some big factory farms have been able to get this label without changing hardly anything about how their raise their animals. According to their website, “Since 1877, the American Humane Association has set the gold standard in animal welfare.” In spite of that boast, they set the bar lower than anyone. They state, “Our Animal Welfare Standards were built upon the Five Freedoms of Animal Welfare, which require that an animal be healthy, comfortable, well-nourished, safe, able to express normal behavior, and free from unpleasant states such as pain, fear, and distress.” All of that sounds like common sense — like even meat without certification should be raised to those standards. Unlike the other two certifications, which require a certain amount of space for turkeys, this one merely says, “Turkeys must have sufficient freedom of movement to be able to stand, turn around, and flap their wings without difficulty.”

So, when you go to the store, you have to know exactly what label you want. You can’t assume that simply because the word “humane” is on the label that it would actually fit your definition of humane.