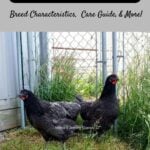 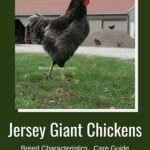 Jersey Giants aren’t your average chicken. They’re the largest non-hybrid chickens in existence! However, it’s not just size that makes them stand out. Their gentle natures and keen foraging abilities enable them to live large on slow food focused homesteads.

Like turkeys, Jersey Giants grow tall quickly. But they’re slower to feather and develop lean muscle than other breeds. Yet, these slow starters ultimately make up for lost time by thriving on minimally protected pasture.

When you factor in their good laying capacity and extra-large eggs, these dual-purpose predator-resistant barnyard favorites are the perfect choice for friendliness, flavor, and living large in free range settings.

The first “Black Giants” as the breed was initially called were created from crossing Black Javas, Dark Brahmas, and Black Langshans. Later, Cornish chickens were added to the genetic mix to improve the rate of growth.1

The early Giants were exceptionally large, black-feathered, meat chickens with good foraging and laying capacity. However, their name didn’t stem from their feather color. The word Black referred to the two brothers who first bred them.

From 1870 to 1890, John and Thomas Black began perfecting the new breed in Burlington County, New Jersey, near the town of Jobstown. The original “Black Giants” were later renamed “Jersey Giants” to reflect their place of origin. (That also likely reduced confusion when White and Blue Jersey Giants were introduced.)

It sounds counter-intuitive, but Jersey Giants come in a standard size and a bantam size. However, I couldn’t locate any breeders or authorities on raising bantams in my research. If you’ve kept them or know any breeders who offer them, we’d love for you to share your experience in the comments section.

The easier to find full-sized Jersey Giants were originally developed as a chicken alternative to turkey. In that capacity, they were very popular for use on small farms or homesteads. However, as industrial meat production ramped up and backyard chicken production declined, the demand for turkey-sized chickens diminished.

Today this breed is on the Livestock Conservancy watch list. Thankfully, due to an increased interest in slow food2 and high-quality free range chicken meat and eggs, Jersey Giant popularity is increasing.

How big do Jersey Giants get?

Buyers beware! Since these lines fell out of favor for a while, there is a lot of anecdotal information to suggest that not all breed lines of Jersey Giants will reach the staggering 10-13 pounds of chicken that once came standard for the breed.

If you are specifically interested in Jersey Giants that will live up to the weight requirements shown below, read hatchery reviews or talk with breeders to confirm growth rates.

Today, Jersey Giants come in several colors.  The American Poultry Association (APA) has accepted three colors with Standards of Perfection (SOP). The original Black was admitted in 1922, White in 1947, and Blue in 2002.4 Splash Jersey Giants, though not APA accepted, are also available from breeders who breed for the blue color variation.

Technically, in the Bantam class, Black and White color variations have also been accepted.

Chickens that were heavily bred for ornamental purposes often have long lists of color options and decorative features like frizzling. However, since Jersey Giants were created as a meat breed with good egg production, and not an ornamental breed, they have fewer current color options.

Occasionally, the feathers may show some copper or reddish markings. Currently, though, that reddish coloring is not considered a desirable quality by many breeders.

Blue Jersey Giants are slate blue with dark feathers on their legs. However, this color variation is not self-blue.

That means even when you breed a Blue Jersey Giant hen and rooster that meet the APA standards, you will get end up with roughly 50% chickens with APA standard blue slate coloring. Another 25% will be “splash” which is a lighter, more dappled gray, rather than the slate blue coloration. The final 25% of chicks will be black.

As a slow starting breed, it can take anywhere from 7-10 months for Jersey Giants to achieve their renowned large size. This slow growth rate is a characteristic of the breed. Jersey Giants’ delayed development contributes to the overall quality of the meat and density of the muscle tissue.

When raising Jersey Giants as a meat chicken, taste and texture should also be given a high priority. Check with breeders or hatcheries to get details on growth rates and flavor profiles to get the best quality meat birds with buttery yellow carcass color.

Jersey Giants aren’t productive layers compared to hybrid production layers. However, they are considered good layers among the heritage breeds. They can lay over 150 extra-large eggs per year. Egg color can vary between tan to dark brown.

If you plan to use the Jersey Giants mainly as layers, check with the breeder or hatchery to find out specifics about laying rates and egg color for their genetic lines.

If Orpingtons are the Golden Retrievers of chickens, the Jersey Giants are the Great Pyrenees! As large, slightly aloof, but still loveable chickens, they often take on a guardian role in a mixed flock. They may patrol outer areas of the run or intervene when their flock mates are threatened.

Jersey Giants are not Cornish-cross substitutes and are not ideal for use in long-term confinement. These birds will do best when allowed to do some free-range foraging on plentiful pasture after they leave the brooder.

Jersey Giant hens do get broody, though not as reliably as other heritage breeds. However, heavy hens have been known to break eggs while sitting the nest. Some people recommend that you put a pillow in the nest box underneath the nesting materials to soften the area and minimize breakage.

If you plan to incubate Jersey Giant eggs regularly, consider an incubator and egg turner designed to accommodate duck or turkey eggs to account for their extra-large egg size. Additionally, it may take an extra day or two for Jersey Giant chicks to hatch relative to other chicken breeds.

Jersey Giant chicks are larger and taller than most other chicks from hatching onward. They also take longer to feather. As such, they’ll need more brooder floor space and more head room. They’ll also need a couple extra weeks in the brooder before you transition them to their juvenile residence.

If you plan to brood a mixed flock together, Jersey Giants will do well with faster growing large breed chicks like Cochins. But consider keeping them in a separate brooder from slow growing small breeds or bantams as a safety precaution.

Once fully feathered, Jersey Giants are quite cold hardy. However, it takes up to 6 months to get them to that point of cold-hardiness. Plan to protect them from cold until they are fully-feathered and have begun to put on noticeable feather mass.

Also, although their large bodies will keep them relatively warm in cold conditions, their comb size can range from small to large depending on genetic line. Larger-sized single combs will be frostbite prone. Protection from icy conditions and wind are necessary.

Once they size up, these big birds are also prone to over-heating in hot weather. Offer them plenty of shade for warm days and cool breezes when possible.

As a heavy breed, low roosts (2-3 feet) are better for Jersey Giants. Also, allow ample body space for each bird on the bar so they don’t need to be crowded together. That way they stay cool on warm nights.

Wide bars, such as using a 2” x 4” are also better to support their mature weight.

In areas with low predator pressure, you might be able to get away with letting mature Jersey Giants free-range by day and return to a fixed coop at dusk. They are generally non-preferred by hawks due to their large size. However, that won’t deter foxes, coyotes, dogs, or wild cats.

Always keep in mind that no chicken, no matter how large, is predator proof all of the time.

Jersey Giants generally aren’t typically over eaters. You may need to entice them to put on weight once they are fully feathered. However, they will still eat more feed than smaller chickens to grow and maintain their size.

Expect most of the weight gain to begin after 6 months of age. Increase food as necessary to keep up with weight gain. Also, note, these giants can continue growing slowly for several years before they reach their full weight potential.

In general, Jersey Giant roosters are relatively mild mannered. However, given their large size, they are only ideal partners for Jersey Giant hens or other large breeds like Brahmas or Cochins. A ratio of 1 rooster for every 6 hens is ideal.

Also, if you plan to raise multiple Jersey Giant roosters out as a meat source, overcrowding will make them prone to in-fighting and collectively bullying weaker roosters. They can also become less friendly toward people.

Give Jersey Giant roosters raised for meat plenty of room to roam in separate living quarters than where you keep your hens.

Jersey Giants have a lot to offer in the right circumstance. But given their large size and slow maturity rates, you’ll want to weigh the pros and cons carefully before you commit to their long-term care.

Overall, Jersey Giants are an ideal option for flavor-focused foodies and large egg lovers with plenty of pasture.

There are a few more things you might find interesting about Jersey Giants.

Can they really grow to 20 pounds?

There once lived a Jersey Giant capon (castrated male) who weighed in at 20 pounds at 6 years of age. There was also a 9-month-old capon that topped out at 16.5 pounds. Though these staggering weights are clearly possible, they aren’t normal even for this large breed.

Jersey Giants have a reputation for being more vocal than other chicken breeds. In the way that big dogs have big barks, these big chickens do seem to have more commanding voices than less stately breeds.

Overall, though, I’d rate them about on par with other breeds considered suitable for backyards (e.g. Plymouth Rocks or Orpingtons). They do get a little chatty and squawky at times during the day.

They also have “eggs-altations” every time they lay. But who can blame them. Wouldn’t you if your eggs were that big?

They are generally quiet at night. And the roosters seem significantly quieter than Leghorns!

Jersey Giants won’t be the first choice for fast-food lovers. But if you are all about slow food, supporting heritage breeds, and living large on the free-range homestead, they may just be your perfect chicken!

Are you thinking about getting chickens or do you already have a flock? Check out >> A Beginner’s Guide to Chickens

Tasha Greer is an Epicurean Homesteader and author of Grow Your Own Spices and Weed-Free Gardening.

Thrifty Homesteader is a participant in the Amazon Services LLC Associates Program, an affiliate advertising program designed to provide a means for sites to earn advertising fees by advertising and linking to amazon.com. You pay the same price when you purchase through affiliate links as you would if you went directly to Amazon, and our site earns a small commission, so by shopping through our links, you are helping to support our blog so that we can continue to provide you with free content.
143 shares
143 shares